GENEVA, Feb 1 2011 (IPS) - To allow least developed countries (LDCs) to protect nascent industries, they are not required to cut tariffs for industrial goods and fisheries in the Doha Development Round. However, tariffs cuts will affect them if they are members of customs unions where some of their neighbours are larger developing countries without LDC status. 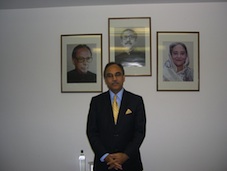 For example, “Nigeria is not an LDC but the nine LDCs in the Economic Community of West African States (ECOWAS) may also be bound by the commitments that their more powerful neighbour agrees to in the Doha Round,” explains Aileen Kwa in response to questions from IPS about what lies ahead for LDCs at the World Trade Organisation (WTO) during 2011.

Kwa is coordinator of the trade and development programme at the South Centre, an intergovernmental organisation representing developing countries and based in Geneva.

“This is the problem: tariff cuts, whether in agriculture or NAMA (non- agricultural market access), are not going to help poor countries with food security, industrialisation or increasing their domestic production. In most African countries, agriculture has been destroyed by liberalisation, so they need to put up their tariffs instead of reducing them,” Kwa argues.

This point of view is shared by an African diplomat who spoke on condition of anonymity due to the sensitivity of negotiating positions: “Sectorals (deep cuts or elimination of tariffs in certain industrial sectors by some developing countries, supposedly voluntary) will affect LDCs that are in custom unions with large developing countries, particularly those LDCs that depend on tariffs for their revenue.

“It is difficult to bring this subject to the negotiating table. In the economic partnership agreements (EPAs) being negotiated with the European Union there is at least the recognition that the implementation of the EPAs may have adverse effects. In the WTO we do not have that.”

Mohammad Abdul Hannan, Bangladesh’s ambassador and coordinator of the LDCs group at the WTO, admitted in an interview with IPS that the Doha Round would cause preference erosion for LDCs.

“That is an issue. LDCs have duty-free and quota-free market access to most developed countries under various autonomous preference schemes. Reduction of tariffs across the board will make LDCs less competitive in comparison to other developing countries. Therefore, there should be other measures to compensate LDCs for subsequent losses,” says Hannan.

LDCs need more clarity from other WTO members on tariffs cuts and tariff lines where LDCs will be given duty-free and quota-free market access, he adds.

LDCs’ total share of world trade is only one percent and their exports consist mainly of natural resources and some manufacturing and agricultural products.

“The issue is production and until these countries can actually produce, having market access holds no real value for them. The gains for LDCs and other lower income countries from the Doha Round are not apparent,” Kwa argues.

Hannan disagrees on this point: “Richer countries and large developing ones will benefit the most from the conclusion of the round because of their capacity to trade. But through special and differential treatment LDCs can also benefit from the international trading system.

“Developed and developing countries who are able to do so have to support the efforts of the LDCs to build and expand their supply-side (production) capacities.” Special and differential treatment involves exemptions and assistance for developing countries.

Hannan adds that, “as LDCs, we expect the Doha Round to protect and augment our productive capacity and enhance our effective market access. The Doha Round, with development at its core, came about to correct the imbalances of the previous rounds.

“The final outcome of Doha must ensure that development remains the centrepiece of the agreement.”

Hannan is confident that trade liberalisation will bring about growth, employment and development for the poorest countries: “For us, market access, cotton and services are very crucial. These have to be complemented with aid for trade for capacity building and trade facilitation for LDCs to beneficially integrate into the multilateral trading system.

“We are encouraged by the momentum generated recently and would like to believe that we are in the last lap of this decade-long round. Failure to conclude the round would affect LDCs the most.”

It is hoped that the just-concluded World Economic Forum in Davos, Switzerland, will give new impetus to the round. Pascal Lamy, WTO director general, asked the chairs of the negotiating groups to produce new texts by April and the rhythm has intensified.

Kwa regards the high unemployment rates in many countries – due to the global economic recession – as a significant spur for opposition to the conclusion of the round.