WINDHOEK, Feb 22 2011 (IPS) - A schism about the division of revenues in the world’s oldest customs union threatens to derail the process of regional economic integration in Southern Africa. 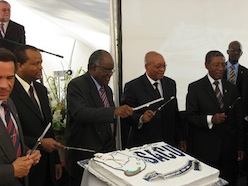 The internal problems plaguing the Southern African Customs Union (SACU) for the past year have entered a new phase. A concept study looking into revenue sharing from the SACU pool proposes a radical overhaul in which South Africa receives more money, while Botswana, Lesotho, Namibia and Swaziland (BLNS) see their shares drop.

In some cases this drop is significant. In the SACU-commissioned study the Australian Centre for International Economics proposes a drop in revenue for Swaziland from nine to three percent of the pool by 2019.

Botswana in the same period would go from 17 to a paltry 6.7 percent, while Namibia’s share declines from 15 to nine percent. Only Lesotho would see a marginal increase from 8.5 to nine percent.

South Africa, which presently receives less than 50 percent, would receive 72 percent of the pool.

While it is unlikely that the proposal will be accepted in its current form, it is a welcome stick for Pretoria. South Africa has long lamented the pressure the current system puts on its treasury while the BLNS states use their share to fill their coffers.

In the case of Swaziland, the mighty Congress of South African Trade Unions (COSATU) has openly condemned the use of SACU revenue for “extravagant activities such as the purchase of luxury cars for the king’s birthday”, referring to the ruling autocrat Mswati III.

The South Africans want the money used for development while the BLNS argue it is a rightful compensation for allowing the sub-region’s behemoth to usurp their economic policy space.

“South Africa needs to take care it respects the sovereignty of the other members in the discussion that takes place.”

This is a major concern in the region where South Africa’s dominance is increasingly frowned upon. It could harm the fragile process of regional integration in the Southern African Development Community (SADC). States Naidu: “SADC wants to have a fully fledged customs union by 2016. That means that SACU, as a building block for such a customs union, needs to sort out its issues.”

The current tiff between the SACU members has a much wider impact, she argues. “It is not just about revenue sharing. The outcome of this process will affect how other SADC countries structure tariffs or introduce trade barriers.”

On the other hand, as Roman Grynberg of the Botswana Institute of Development Policy Analysis recently pointed out in an opinion piece in the South African press, it is very unlikely that SACU would agree to let additional members benefit from the current revenue-sharing arrangement.

In that sense successful reform of SACU would be a prerequisite for building it into a larger SADC customs union.

“The showdown in SACU has been a long time coming,” according to Paul Kruger, researcher with the independent Trade Law Centre of Southern Africa (TRALAC), based near Cape Town, South Africa. “Integration in the region will depend on the outcome of this process but South African policymakers have come to see SACU – with its common negotiating mechanisms – as an irritation.”

This has consequences for the regional integration agenda: “South Africa is getting less and less interested in a SADC customs union. The other countries favour the idea because of the transfers they currently see in SACU but South Africa knows that, in a customs union, it is at the short end.”

Instead, South Africa is eyeing a tripartite free trade area (FTA) between SADC, the Common Market for Eastern and Southern Africa (COMESA) and the East African Community (EAC), argues Kruger.

Moreover, South Africa’s foreign policy agenda has shifted since the formation of the India, Brazil, South Africa (IBSA) tripartite grouping and the invitation to South Africa to join the BRIC (Brazil, Russia, India and China) formation. It is keen to project itself as “the gateway to Africa” within these international partnerships.

Whether SACU can formulate a common outlook is unsure. “Namibia and South Africa seem to be playing a subtle game geared towards structural change in SACU,” remarks South African trade expert Dot Keet. “Botswana is restructuring its economy entirely differently, while Swaziland and Lesotho are almost completely dependent on a combination of SACU revenue and foreign aid.

“It is possible that reform of the revenue stream will lead to a development fund, controlled for instance by the Development Bank of Southern Africa (DBSA). However, countries would need to be ensured proper representation on the board of such a fund for it to work,” she adds.

But the problems in SACU might run too deep.

Grynberg warned that other SADC countries are weary of South Africa controlling almost all of the production benefits in SACU. Because of the customs union, SACU members have no means of protecting their industries from competition by South African products.

It is a point that was recently made by Namibian deputy finance minister Calle Schlettwein, chairperson of the workgroup tasked with SACU reform, when he said that South Africa’s dominance prohibits other countries from developing.

In the past, SACU revenue compensated for that. Abandoning this arrangement would cause polarisation, said Schlettwein, which could culminate in the trade barriers Naidu warns of.