UNITED NATIONS, Mar 29 2011 (IPS) - The 53-member Asian Group, one of the largest regional groups in the world body, is expected to endorse the final candidates for two key positions in the organisation: the president of the next General Assembly sessions, beginning in September, and the secretary-general of the United Nations for the next five years, beginning in January 2012. 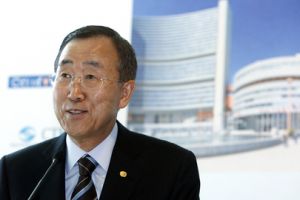 Incumbent Ban Ki-moon has the support of both the Asia Group and the powerful P-5 should he run for reelection. Credit: UN Photo/Mark Garten

The Asian Group’s enhanced role in the two elections this year has been triggered by the fact that both posts, according to time-honoured geographical rotation, belong to Asia.

In a “straw poll” conducted by secret ballot, the Group has already picked Ambassador Nassir Abdulaziz al-Nasser of Qatar over Kul Gautam of Nepal, a former deputy executive director of the U.N. children’s agency UNICEF, to head the U.N.’s highest policy-making body.

Once the Group officially confirms al-Nasser, the election by the 192-member General Assembly will be a formality.

Ambassador al-Nasser will succeed Joseph Deiss of Switzerland when the 66th session of the General Assembly opens in September.

But perhaps the more important endorsement of the Asian Group would be when it approves the next secretary-general.

If the current secretary-general from South Korea decides to run for a second five-year term, with the approval of the five permanent members (P-5) of the Security Council, namely the United States, Britain, France, China and Russia, the Asian Group is expected to go along with the decision.

But if Ban decides not to seek re-election, the Group will have to endorse another candidate since it is Asia’s turn to have two five-year terms for the post of chief administrative officer of the United Nations. Ban’s current five-year terms ends Dec. 31.

The last secretary-general, Kofi Annan of Ghana, completed two five-year terms (1997-2006) after his nomination for re- election was endorsed by the African Group. Annan’s predecessor, Boutros Boutros-Ghali of Egypt, served only one term because his decision to run for a second term was vetoed in the Security Council by the United States.

Despite renewed reports of a second term by Ban, the present incumbent has so far refused to make any public pronouncements about his future.

Asked if the recent speculation about a second term was credible, U.N. deputy spokesperson Farhan Haq told IPS: “The secretary-general has not announced his intentions for a second term.”

At this point, he is still focusing on the work at hand, including the situations in North Africa and the Middle East and the problems at the Fukushima Daichi reactors in Japan, Haq added.

Speaking on condition of anonymity, an Asian diplomat told IPS the Asian Group (AG) is waiting for Ban to signal his intention to seek re-election. “Thereafter, the AG will probably meet and support his re-election, with the chairman for the month writing to the Security Council President and the General Assembly President to inform them of the AG’s position.”

That is what is being talked about in the corridors amongst some AG ambassadors, he said.

“Whether the relevant AG meeting will go according to script is not clear yet,” he cautioned.

But at the end of the day, with or without Asian Group support, Ban will be re-elected, the diplomat predicted. That’s because the P-5 in the Security Council have indicated informally they will support his re-election.

The thinking among diplomats is to complete the election process before the summer break so that at the start of the new Assembly sessions in September, Ban will be a stronger position.

“That will make his interactions with world leaders much more smooth, without him having to worry about re-election,” he added.

A former senior U.N. official told IPS: “Ban Ki-moon would prefer the Asian Group to endorse him. But if that proves difficult, he would move ahead with the P-5 blessings.”

According to the U.N. charter, “The secretary-general shall be appointed by the General Assembly upon the recommendation of the Security Council.”

And the 15-member Security Council plays a key role because it has traditionally nominated only a single candidate, with perhaps one exception when the first secretary-general, Trygve Lie of Norway, was re-elected by the General Assembly, without a recommendation by the Security Council.