KIKWIT, DR Congo, Mar 25 2011 (IPS) - Smallholder farmers in Bandundu Province are boosting their harvests with the help of the sweetly-named velvet bean. 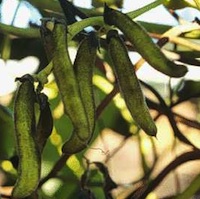 For some time, farmers in Bandundu, particularly in the Kwilu district, have been battling static or declining agricultural output – not entirely surprising when they were forced to plant on the same land without applying fertiliser or allowing fields a fallow period.

But several dozen smallholders in Kwilu have adopted Mucuna utilis – the velvet bean – as a means of protecting soil fertility.

“Ever since we started using this plant, we haven’t had any problems with infertile soil. Thanks to the plant, this year our family has produced five bags of groundnuts, whereas in the past, without the Mucuna utilis, we were getting only one and a half or two bags,” says Nicolas Mimpaka, a peasant farmer from Kwenge, 25 kilometres from Kikwit, the capital of the mainly rural province of Bandundu.

Mimpaka and others in the the Kwilu district in the south of the province come to Kikwit to sell their produce – groundnuts, maize, cassava, rice, marrows, beans, and other vegetables – to traders or to transport companies who provide Kinshasa, the capital of the DRC, with fresh food.

In a 2008 report, the AIPD research team notes that during field trials with a maize crop, a 50-hectare field without Mucuna utilis produced 140 kilogrammes, while the same-size field with the fertilising plant yielded 350 kilos.

A hectare of cassava without Mucuna produced 700 kg compared to 1,250 kilograms with Mucuna; a hectare of groundnuts grown without the cover crop yielded 300 kg, compared to a 550 kg when planted alongside the natural fertiliser.

Daniel Mpolo, head of the department of biology and chemistry at the Kikwit Institute for Higher Learning, explains that Mucuna utilis is a fast-growing creeper that produces large quantities of edible seeds - along with the leaves, these can be a valuable source of fodder for livestock.

"The stems take root once they touch the ground and cover it very rapidly. This species prefers hard earth and is extremely drought-resistant," he tells IPS.

The velvet bean has been introduced to the area by the Support to Peasant Farmer Development Initiatives (known by its French acronym, AIPD), an umbrella organisation for agriculture in the area.

“From 2008 to 2009, we carried out experiments in the Kwenge and Lukamba regions, and we observed positive results,” says Emmanuel Malenda, an agronomist and one of the managers of AIPD.

Mulenda says out of 50 fields under observation during that research period, 45 became more fertile thanks to Mucuna utilis, and produced great quantities of cassava, maize, groundnuts and marrows. The plant is a legume that is grown in conjunction with other plants as a cover crop, a live mulch that helps retain moisture and transfers nitrogen from the air to the soil via its the nodes on its roots.

During workshops to promote the plant, agronomist Cyprien Ngeleto highlighted the plant’s useful characteristics. “Mucuna utilis can be planted towards the end of the rainy season, as it is drought resistant. After cultivation, it protects and regenerates the soil, due to the rapid germination of the plant’s seeds over a period of four to six days.”

“As agriculture is our livelihood, this plant is helping us a lot. My husband doesn’t have work, but we eat nearly every day,” says Jeanne Mplilikwomo, a Kikwit farmer. She says farming has allowed her to buy her children’s school uniforms and pay their school fees.

On a community radio programme, another smallholder, Jeanine Mandondo, comments: “Instead of practising the system of making forests fallow, a system that takes five, six or eight years, we prefer to grow this plant ourselves, and it is definitely the secret to increasing our agricultural production.”

“Six months is enough for Mucuna utilis to fertilise the soil,” adds Robert Manianga, a farmer from Lubungu, another village within a few kilometres of Kikwit.

The velvet bean is quickly securing a place in the farming practice in this corner of Bandundu, where it is contributing to food security and rural livelihoods.
Tweet
Republish | |