QUITO, Mar 22 2011 (IPS) - For one day, civil servants are trading their desks for the chilly highland plains in a rural community 3,500 metres above sea level on the outskirts of the Ecuadorian capital, where they are helping to plant native trees. 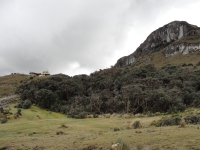 Since last November, employees of the state-owned power company, Empresa Eléctrica Quito, have been taking turns to participate in the planting of 10,000 polylepis trees, as part of an agreement with the Quito Water Protection Fund (FONAG).

The polylepis tree, which is native to the Andes mountain range and has a trunk composed of multiple thin layers that resemble paper, is the only timber-yielding tree that grows in this high-altitude area. Planting polylepis trees will help improve the retention of water in a vital river basin.

In addition to planting trees, “we are trying to raise the awareness of the state functionaries and to demonstrate to the indigenous communities that the people from the city really are working together with them to preserve sources of water,” FONAG director Pablo Lloret explained to Tierramérica.

Initiatives like these contribute to the success of FONAG, a trust fund financed with both public and private moneys, whose aims include participatory water management, increasing public awareness, and the development of a mathematical model to define the factors that impact on the basin of the Guayllabamba River, which flows from the Andes to the Pacific Ocean.

The Upper Guayllabamba River Basin, located between 5,893 metres and 1,000 metres above sea level, provides water to two million inhabitants of Quito and another 570,000 people in the northern province of Pichincha, as well as supplying irrigation water for smallholders and exporters of flowers and horticultural crops.

It is one of the most densely populated areas of Ecuador, which means it is most heavily affected by the problems of competition over water usage and serious water pollution stemming either from direct causes or as a result of scarcity, according to the FONAG website.

Less than one percent of wastewater in Quito is treated before it is discharged into the Machángara, Monjas and San Pedro Rivers (San Pedro is the name given to the upper stretch of the Guayllabamba).

“The heart of FONAG is the water management programme, and its two arms are the policy and technical branches,” said Lloret. This has led to the establishment of the Guayllabamba Basin Management Board, conceived as a governance system that includes all users.

Over the last four years, with the cooperation of the French Institute for Development Research (IRD), a mathematical model of the watershed has been developed. “Today we can simulate what would happen to the water balance if there is a change in any component of supply or demand,” IRD representative Bernard Francou told Tierramérica.

Concern over rapid, uncontrolled urbanisation worldwide has led the United Nations to devote this World Water Day, Mar. 22, to the theme of “Water for Cities: Responding to the Urban Challenge”.

FONAG was created in 2000 with initial funding of 21,000 dollars and currently holds 9.5 million dollars. Only the yields of the trust are used to finance its operations, and administrative costs cannot exceed 20 percent of the funds invested in projects.

The leading contributor to the fund is the Empresa Pública Metropolitana de Agua Potable y Saneamiento (EPMAPS) of Quito, the public water and sanitation authority, which turns over one percent of its billing to the trust, around 190,000 dollars a month. Other contributors include the city power company, U.S.-based conservationist organisation The Nature Conservancy, the Ecuadorian mineral water company Tesalia Springs, and the Cervecería Nacional brewery, owned by the U.K. corporation SABMiller.

The FONAG model has been replicated in nine other provinces of Ecuador, as well as in Colombia and Peru, while similar initiatives are being developed in Bolivia and the Dominican Republic.

Yet when it was first created, “it was nothing but a bank account where a few funds were deposited” and almost disappeared, recalled Juan Neira, the general manager of EPMAPS between 2000 and 2009.

It was not until 2004, when a number of organisations joined together “and the water company decided to donate one percent of its billing to the trust fund, that FONAG was able to get organised, hire staff and undertake projects,” Neira told Tierramérica. In addition to the simplicity of its functioning, another of the fund’s strong points is its transparency, stressed Jorge Ribera, former operations manager of the Quito water authority. “All of the partners audit the trust, and the results can be seen immediately,” he told Tierramérica.

In pursuit of its educational goals, FONAG joined forces with the United Nations Environment Programme (UNEP) last year to undertake the “Dissemination and Sensitisation Strategy for the Care and Protection of Freshwater and Saltwater Ecosystems – From the Highlands to the Mangroves”, which includes radio spots, bus advertisements and workshops.