INDIA: Tech to the Rescue of School Lunch Model 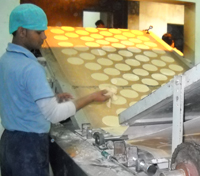 The hot meals are served by the Akshaya Patra Foundation, the largest non- profit in India, in partnership with the government’s school meal programme that covers 120 million children in 1.26 million schools across the country.

A show of hands in Ekdanta indicates that one quarter of students has not had breakfast before school.

Eight-year-old Nagina Singh has not had even the glass of buffalo milk that other children have had before school. “Both my parents left for daily wage labour early morning and there was nothing at home to eat,” she told IPS.

“This is not uncommon among the 85 marginal and share-farmer families populating Ekdanta,” says head-teacher Chandrasen Singh.

The small dusty village is 170 kilometres from Delhi in the northern Indian Mathura district of Uttar Pradesh State.

Intelligently engineered automated kitchens have been Akshaya Patra’s cornerstones for achieving remarkable scale and efficiency in delivering school meals. Using a hub-and-spoke model, mass quantities of food cooked in these automated kitchens are distributed in smaller amounts to individual schools in the surrounding areas.

Malnutrition, classroom hunger and school dropouts continue to be grave concerns in India, making Millennium Development Goals (MDGs) one and two – to eradicate extreme poverty and hunger, and to achieve universal primary education – difficult to achieve by the 2015 deadline.

The global hunger index published by the International Food Policy Research Institute ranks India – with 42 percent of the world’s underweight children aged under five – 67 among 84 countries in 2010.

In 2001 the Supreme Court of India directed governments to provide cooked meals in all state-run primary schools to address these concerns.

In 2000, Akshaya Patra was already feeding 1,500 school children in Bangalore. “Within a month of starting we received requests to feed 100,000 children,” 37-year-old Narasimha Dasa, a mechanical engineer by training, told IPS.

That did not look easy but Akshaya Patra is unique in that its missionary cadres are teaming with qualified men from some of India’s top tech institutes.

In Vrindavan, particularly difficult was rolling out thousands of ‘chappatis’ (Indian unleavened flat wheat bread) in real time for the noon meal in schools scattered up to 60 kilometres from the centralised kitchen.

“Akshaya Patra is determined to serve habitual food so that children are attracted and nourished,” Madhuvrata Dasa, another engineer who works with Akshaya Patra, told IPS.

“We approached a biscuit maker in Punjab, provided the design and six months later in 2003 installed a machine turning out 10,000 chappatis an hour, without any manual input,” says Narasimha Dasa. The machine kneads the dough, rolling out a layer of dough on a metal conveyer belt, cutting round shapes, roasting them perfectly.

The cooking starts at three in the morning with vegetables being diced. By five, inside one of the three kitchens, the aroma of boiling lentils and vegetables fills the air as steam from seven rice cookers casts a translucent haze.

A team of 55 helpers, 5 cooks and another 5 supervisors manage the day’s cooking.

“The kitchen is geared to cook in 6 hours – close to 6,000 kilograms of rice, 5 tonnes of vegetables and 6,000 litres of sambar, a lentil and vegetable soup,” says Ganesh who decides the daily menu.

At eight in the morning the kitchen’s frontcourt is teeming with attendants and heat-insulated, dust-free delivery vans – 60 of them with smiling children emblazoned on their doors.

Food is packed in 3,000 insulated steel containers, weighed for the correct quantities that will feed exact numbers – ascertained from each school’s roll call so leftovers are minimised.

Besides a 2007 Harvard study for precise time management, the non-profit’s innovative technical and logistic efficiency to bring about quality standardisation and cost-effectiveness has been widely appreciated as a school lunch model.

Partnering with the government, Akshaya Patra gets half of the six rupees or eleven cents per meal cost from the government in the form of grain. Accordingly, the government contribution for the Vrindavan unit’s 169,000 children in a six-day school week is roughly 66,700 dollars.

Release of funds and grain from the government however sometimes takes 2 to 3 months. “To sustain huge daily expenditure while waiting for reimbursement is a difficult proposition for private players. In 2009 we had to even take large loans to keep the ‘kitchen’ fires going,” Narasimha Dasa told IPS.