MOPEIA DISTRICT, Mozambique, Mar 23 2011 (IPS) - There is no way one can have a conversation with Linette Olofsson without being dragged into her collection of images about her community agricultural project in central Mozambican Province of Zambezia. 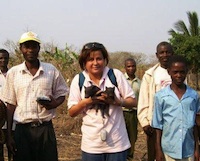 It has been seven years since she left the Mozambican parliament and started the Nfuma Yatho project.

Nfuma Yatho, which means “our wealth” in the local Sena language, integrates diverse community groups: women, local leaders and families who before did not have any other source of income. The project combines livestock, fishing, a mill and a wood-fired bakery.

Olofsson’s community project in Mopeia mainly involves young women. The idea of the project came about during a visit to the district in 2000. During this period she was still an opposition MP, and when a local community leader in Zambezia asked Olofsson to do something for the local community, she could not resist.

“Since I ended my parliamentary role, I have dedicated myself to the project,” she says.

Olofsson cut her first political teeth not in Mozambique, but in Sweden. Married to a Swedish national, she had fled Mozambique in 1990 at the height of the civil war.

In 1994 she was a member of the Swedish Social Democrat party and was the first Mozambican woman to be elected to the Swedish City Hall. Olofsson was also a councillor for housing.

“As an immigrant, I was very much concerned about the social integration of foreigners in Sweden, promoting access to housing and avoiding the growth of isolated communities in the so-called ghettos.”

She returned to Mozambique in 1998, immediately entering parliament as an MP for the former guerrilla group, RENAMO – the Portuguese acronym for the Mozambican National Resistance party.

RENAMO fought a long civil war against the government from 1975-1992, before becoming the main opposition party in parliament. Olofsson served as a RENAMO MP from 1999-2004. She left the party when she was denied the chance to stand for a second term.

She is still active in politics as a founder member of the Mozambique Democratic Movement (MDM) – a political party created as a result of conflict within RENAMO.

“Being a woman in politics… it’s not easy, especially in a country that is politically dominated by men. And being in the opposition, it’s even more difficult because of discrimination,” she explained.

Mozambique is one of the southern African countries with the highest proportion of women in parliament and government. Women account for eight out of 28 ministerial seats, five deputy ministerial positions and three of the country’s 11 governors.

Thirty-five percent of the current members of Mozambique’s parliament are women, and for the first time in its history, parliament has a woman – FRELIMO’S Veronica Macamo – as Speaker. Both the main political parties, FRELIMO (Portuguese acronym for the Liberation Front of Mozambique) and RENAMO, have reserved a third of their electoral lists for women. Both also have women as the leaders of their parliamentary blocs.

“A society that marginalises its women is marginalising itself because it ultimately fails to count on the contribution of more than half of its population,” said Macamo during the October 2010 Pan African Parliament held in South Africa.

But for Olofsson, Mozambican women in politics could do more for the development of the country. They often fail, she says, due to lack of experience, as the country is still a very young democracy.

“I think we still have a very weak role and therefore we are far from reaching our objectives,” Olofsson explains.

“One of our main obstacles is what we call ‘party discipline’. Mozambican women in parliament are not united. They are more committed to their parties’ rules than to women’s objectives. They don’t trust women from a rival party.”

Olofsson told IPS that while the number of women in parliament represent a significant change, Mozambican women – a majority of whom live in rural areas – are not yet truly represented in government.

“We have quantity, not quality,” she says.

“We have to invest more in local women’s associations… giving women the tools for self empowerment. Providing them with more access to information, especially in rural areas.”