CAIRO, Mar 20 2011 (IPS) - Egyptians voted in a nationwide referendum yesterday on proposed amendments to the constitutional articles that govern the electoral process. But regardless of the outcome, political analysts are certain that the Muslim Brotherhood, outlawed throughout the 30-year rule of ousted president Hosni Mubarak, remains poised to be an electoral force to be reckoned with. 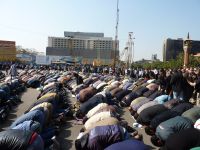 “Despite three decades of repression at the hands of the Mubarak regime, the Muslim Brotherhood represents the primary player in Egypt’s post-revolutionary political arena,” Tarek Fahmi, political science professor at Cairo University, told IPS. “For the first time since its establishment, the brotherhood has an opportunity to come to power via a free and fair electoral process.”

On February 11, Mubarak handed executive authority over to Egypt’s armed forces. In the five weeks since, the military — which has vowed to run the nation’s affairs until free presidential and parliamentary elections can be held — has met a number of the people’s demands, including the replacement of most Mubarak-appointed government ministers.

“As soon as changes are made to Egypt’s Political Parties Law, we plan to apply for the establishment of a political party,” Mohamed Saad al-Kitatni, head of the brotherhood’s parliamentary bloc from 2005 to 2010, said on February 18.

In the first-ever appearance by a member of the group on state television, al-Kitatni stressed that the brotherhood stands for a civil, rather than theocratic, system of governance. “We want a civil state based on Islamic Law and principles such as freedom of thought, justice for all, and equality before the law regardless of race, gender or religion,” he said.

Al-Kitatni went on to say that the group would not field a candidate in upcoming presidential elections, nor would it seek to capture a large majority in parliament.

“We don’t want to give our domestic rivals or our foreign critics any reason to fear us,” he said. “We want to compete fairly with other political movements, which we know were also oppressed under the Mubarak regime.”

Three days after al-Kitatni’s televised comments, brotherhood leader Mohamed Badie formally announced plans to found a political party, to be dubbed the Justice and Freedom Party. While sharing many of the same members and political objectives as the brotherhood, he explained, the new party would constitute a separate organisational entity.

Badie has meanwhile mandated leading brotherhood member Khairet al-Shatter with determining the means of coordinating between the brotherhood and the new party. Al-Shatter was recently appointed to the group’s number-two position after finishing a four-year prison sentence at the hands of the Mubarak regime.

But many of the brotherhood’s critics remain concerned by the fact that the group has yet to articulate its official position on a handful of key issues. In early 2008, the brotherhood unveiled a preliminary political programme, but later retracted it following the eruption of controversy over its stance on, among other things, the permissibility of fielding female or non-Muslim presidential candidates.

“Some segments of the Egyptian public remain suspicious of the brotherhood due to its ambiguous position vis-à-vis the role of Christians and women in the political arena,” said Fahmi. “Why has it taken the group so long to produce an official party platform? The brotherhood must provide a clear explanation of its stance on major issues and hold open dialogue with opposition figures and church leaders.”

Last month, the brotherhood drew up a committee tasked with formulating the proposed Justice and Freedom Party’s official political agenda. On March 16, independent Egyptian daily Al-Shorouk quoted a member of the committee as saying that the new party’s official program “would be issued as soon as it is finalised.”

Notably, the same source said the committee had “agreed to drop a number of controversial articles that had been included in the Muslim Brotherhood’s earlier proposed party platform, especially those stipulating that any presidential candidate fielded by the party must be a Muslim man.”

Meanwhile, some western critics have also voiced concern that, were the Muslim Brotherhood to eventually assume power, it might be tempted to withdraw from the 1979 Camp David peace agreement between Egypt and Israel.

Muslim Brotherhood spokesman Essam al-Arian, however, insisted that any change in Egyptian foreign policy would reflect the will of the Egyptian people. “The coming parliament, which will be elected by the people, will decide Egypt’s position regarding all international agreements and treaties,” al-Arian told IPS.

Fahmi, for his part, believes the brotherhood’s newfound political legitimacy will lead to “the formulation of a new foreign policy that can be expected to reinvigorate Egypt’s historical role as regional leader — a role that was largely destroyed by the Mubarak regime’s close relationship with the US and Israel.”

“The Hamas-run Gaza Strip, to cite only one example, was viewed largely by the Mubarak regime as a strategic threat,” Fahmi added. “But if the brotherhood is granted political legitimacy, Gaza will come to be seen as Egypt’s first line of defence in the confrontation with Israel.”