CUBA: Today’s Youth, As Diverse As the Times

HAVANA, Apr 13 2011 (IPS) - Mariana García is a child of the 1990s, when Cuba was in the grip of the severe crisis that hit the island after the collapse of the Soviet Union and the East European socialist bloc. She grew up bombarded by the first video games and surrounded by people who talked more about how to get by than about their dreams and ideals. 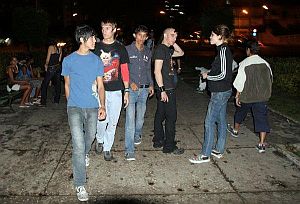 Aware that she and other young people have been assigned the role of continuing the process of social changes that began with the Jan. 1, 1959 triumph of the revolution led by Fidel Castro, García says she prefers to avoid “big words” and that she sees Cuba as “a country where a lot has been done, but there is still a great deal to do, and, especially, to improve.”

The Sixth Congress of the Cuban Communist Party (PCC), to be held Apr. 15-17 in Havana, places its hopes for continuity of the country’s socialist system and for fresh blood to replace the long-time leaders of the revolution on people like García, who are sometimes impetuous and hypercritical.

The 22-year-old university student complains of the tendency to criticise Cuba’s younger generations. “My father says young people today are lost, but he forgets that my grandmother said the same thing about him,” García says, citing an old proverb: “People resemble their times more than they resemble their parents.”

And they are not only different from their parents. Studies show that, in keeping with international trends, young Cubans are increasingly diverse.

While one segment of today’s youth – in which women outnumber men – attends the university, others have decided instead to join the job market. Cuba also has a fast-growing counterculture movement, with hundreds or even thousands of youngsters gathering in their different “urban tribes” on weekend nights along Calle G, one of Havana’s main avenues.

The tribes are largely differentiated by their musical tastes: the rockers (rockeros), who are divided among metalheads (metaleros), new metalheads, punks, hippies and freaks (frikis); the “emos,” devotees of a subgenre of dark, broody rock music; the “mikis,” who listen to electroacoustic, disco and Cuba’s native-grown trova music; and the “reparteros,” who follow reggaeton, hip hop, rap and timba (often referred to as Cuban salsa).

The youngsters, in Havana and other cities, form part of the generation of the MP3, the flash drive and the condom tucked in the pocket.

Although young people have not turned their backs on the common features of their national identity, there are different elements that reflect “the evident diversity among today’s youth,” sociologist María Isabel Domínguez told IPS.

Domínguez, the director of the Centre for Psychological and Sociological Research (CIPS), said the major differences arise from gender, place of residence, race, social background, educational level and access to opportunities.

Four or five generations coexist in Cuba today in constantly shifting relations. Some, like the generations of the 1970s and the 1980s, are starting to merge, while others have not developed a specific identity. Then there are the generations marked by periods of transition.

Those who were young during “the 1960s transition are the generation of the revolution, while the people of the 1990s are the crisis generation,” Domínguez said.

The former group, made up of those who were older children or young teenagers in 1959, intensely experienced the changes ushered in by the revolution as well as a radical break with earlier generations, in both the private and public spheres.

The latter is the generation of the economic crisis of the 1990s, the most difficult period in the second half of the 20th century in Cuba. The revolution may have equalled “opportunity” for their parents, but circumstances were markedly different for those who were young during the so-called “special period” – the euphemistic name given to the crisis.

It was not just about the economic impact of the fall of the Soviet Union and the socialist bloc, Cuba’s main aid and trade partners, or of the stiffening of the U.S. embargo, but about a widening of social inequalities and a deterioration of living conditions.

The generation gap is reflected by the evolution of the different groups’ biggest aspirations and hopes, according to studies carried out by CIPS.

Among those who were between the ages of 14 and 30 in the 1980s, the chief aspiration was a good education, and material living standards were ranked in fourth place. But among people who were young in the 1990s, the top priorities were family, living conditions, improving one’s life by means of higher incomes, and spiritual satisfaction.

“When I was a teenager I had just one pair of jeans, only two different shirts, and a pair of Russian boots,” says Rafael Sánchez, a 46-year-old cultural promoter. “I would have wanted more, but it wasn’t a big deal, because that’s how most people lived. We were also constantly dreaming of a better future. The young people of today don’t live in the future, but in the present.”

A look at the half century since the Cuban revolution shows “a common context, values and practices” shared by the few generations that have lived in that period, but also “variations and a need for readjustments and reconstructions of the ways of thinking and doing, new approaches,” Domínguez says.

The author of several publications on young people says Cuban society “is in need of these constant adjustments,” because the country’s institutions are often tied to “learned ways of doing things, formulas that worked at one time” but have been enshrined as “permanent and immutable.”

“The process of generational succession is didactic, made up of continuities and ruptures,” she says. “Each new generation inherits things, while at the same time it builds and creates new approaches to whatever stage of life they are in. That is the story of humanity.”

Young people, defined by the United Nations as those between the ages of 15 and 24, make up 18 percent of the world population. Around 87 percent of youths live in developing countries.

In the case of Cuba, where the experts include people up to the age of 30 in that category, 2.2 million of the 11.2 million people who lived in the country in 2009 were between the ages of 15 and 29, according to the National Statistics Office.