IBSA States Do Not Always Have Common Positions on Trade Issues

GENEVA, Apr 8 2011 (IPS) - “IBSA what?” is the question you most often get in Geneva when enquiring about the India-Brazil-South Africa (IBSA) dialogue forum, established in 2003 between these three multicultural democracies and emerging markets “to contribute to the construction of a new international architecture”. 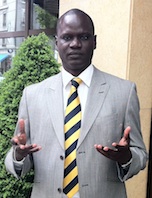 El Hadji Diouf: South Africa will try to trump its IBSA partners when it comes to market access in Africa. Credit: Isolda Agazzi/IPS

IBSA is not an issue in the capital of world trade, Geneva, despite the rhetoric of its Mar. 8 meeting in New Delhi, India, where the three delegations reaffirmed their commitment to “an open, transparent and rule-based international trading regime”.

They also called for an “early conclusion of the Doha Development Round with a balanced outcome which ensures the development needs of the developing countries, especially the least developed countries”.

A trade diplomat from one of the IBSA countries at the World Trade Organisation (WTO), speaking to IPS on condition of anonymity, says, “we don’t coordinate our actions formally as a group. We hold common membership in various coalitions, so we coordinate on an ad hoc basis.”

He explains that Brazil, South Africa, India and China are members of the Group of 20 (G20) in agriculture; of the NAMA-11 group in the non- agricultural market access (NAMA) negotiations; and that they share most positions on intellectual property.

The G20 is a coalition of developing countries but their interests in agriculture may diverge. Brazil, for example, tends to take the offence, while India adopts a defensive position, pushing for a strong special safeguard mechanism that allows developing countries to increase tariffs in the case of import surges or sudden drops in world prices.

The NAMA-11 is a group of emerging market states that asks for flexibilities in the implementation of tariff reductions and for greater market access in industrial goods.

“But, even though the interests of Brazil and India in agriculture may seem divergent, in practice they have been able to find a middle ground with regard to market access, the reduction of trade-distorting domestic support and the elimination of export subsidies,” the trade diplomat points out.

Christophe Bellmann, programmes director at the Geneva-based International Center for Trade and Sustainable Development (ICTSD), explains, “the March Delhi statement is mainly in response to U.S. pressures on sectoral initiatives in the NAMA negotiations.” ICTSD is an independent non-governmental organisation based in Geneva.

Currently, the main divergences in the WTO Doha Round negotiations stem from the U.S. request to large emerging markets to deeply cut or even completely slash tariffs in entire industrial sectors, like chemicals, industrial machinery, electronics and forestry.

Brazil, China and India responded that these initiatives are supposed to be voluntary and must remain so. For Brazil, these sectors represent one third of all its industrial products and, for China, more than 55 percent of all its NAMA imports.

These deep differences have brought Pascal Lamy, WTO director general, to acknowledge last week that the Doha Round “may fail.”

For Bellmann, alliances are “not political or ideological,” but based on commercial interests and therefore very volatile, with the exception of the African group that works more along a regional line.

“Countries don’t think as a group, but in a strategic way, for example, how to increase their weight in negotiations by building alliances, ideally with big countries like China, India and Brazil,” he told IPS.

El Hadji Diouf, executive director of the African Agency for Trade and Development, regards “IBSA as a good initiative of South-South cooperation, but its impact in trade negotiations is limited.” The agency is a Geneva-based non-governmental organisation that specialises in issues regarding trade and Africa.

“The common interest of IBSA is to position itself as an alternative to the hegemony of traditional commercial powers,” he told IPS.

“But these countries must secure access to new markets and are therefore in competition with each other. They can cooperate sincerely on the elimination of agricultural subsidies but cannot make a common offer in market access.”

Neither do they have the same commercial partners. “Brazil has witnessed an incredible growth in recent years and it is globally becoming stronger and stronger. It has a vested interest in the conclusion of the Doha Round, more than the others. South Africa, in contrast, has many relations at the regional level, in addition to its EU relationship,” explains Diouf.

But what can the much smaller South Africa bring to this alliance? “South Africa is a good market for India and Brazil’s exports and, even more so, as an entry point into the African continent because of its membership in different African regional organisations,” Diouf argues.

Concerning the possible effect of IBSA cooperation on African least developed countries (LDCs), Bellmann explains that WTO requirements that apply to South Africa do not apply to LDCs since they don’t have to open their markets in agriculture, NAMA and services.

“We are looking to ways of implementing duty-free and quota-free market access for LDCs,” says the trade diplomat. “India and Brazil are taking steps in this direction.”

The Doha mandate asks developing countries that are in the position to do so to open their markets to LDCs’ products, but without setting a specific target as for developed countries, currently at 97 percent.

“However, because of its geographical position, South Africa could try and get better market access to African LDCs than its IBSA partners,” Diouf reflects.

“IBSA does not exclude competition. Pretoria, for example, does not favour trade liberalisation between its African partners and the EU in sectors like services, to avoid having to share the regional market in which it already has a hand. This is a pre-emptive fight with a commercial rationale that could crop up between IBSA partners.”