ROME, Apr 2 2011 (IPS) - The influx of migrants arriving from Libya and other African countries has created an unprecedented humanitarian crisis in southern Italy. 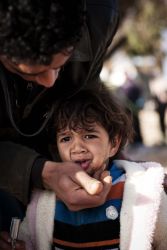 Credit: Save the Children

The number of migrants arriving on the island of Lampedusa has risen considerably over the previous few months, with thousands of people arriving since January. Lampedusa, an Italian island 205 km from the Italian coast, located between Tunisia and Sicily, is used as a holding centre for migrants, particularly from Africa.

Between Mar. 26 and 28, nearly 830 migrants reportedly arrived there, including 80 women and 12 children from Tripoli and Misrata in Libya. But most of them came from Eritrea, Ethiopia, Sudan and Somalia.

In the last week of March, 794 migrants sailing from Tripoli landed on the island of Linosa, 42 km north-east to Lampedusa. Amongst them were 90 women and 20 children under five, and 15 unaccompanied minors, of these five girls. They have all been transferred to Sicily, where a further 500 migrants landed Thursday.

Compared to the larger figures of people fleeing Libya since the revolt against Muammar Gaddafi erupted in late February, the number of migrants to Italy is not very high, though it is generating panic across the country.

According to the International Organisation for Migration (IOM), the total number of people who have left Libya since the beginning of the conflict amounted to 398,652 as of Mar. 29, including 202,273 who migrated to Tunisia, 160,455 to Egypt and 18,137 to Niger as well as lesser numbers to the Sudan, Algeria and Chad.

Italy only reluctantly joined Western-led military operations earlier in March, allowing seven of its military bases to be used for airstrike missions to the North African country. “It is not through actions of war that we can make Gaddafi leave, but rather through strong international pressure to encourage defections by people close to him,” Italy’s foreign minister Franco Frattini told a national private television this week.

Frattini announced that he will meet members of Libya’s rebel Interim National Council in Rome next week. “We have close contact with the rebels in Benghazi, where our consulate is always open,” he said. Italy’s official position is that the way forward is not warfare but diplomatic pressure to bring about defections among members of Gaddafi’s inner circle, and persuade him to go into exile.

Libyans make up only a small fraction of the migrants landing in Italy in recent weeks. According to the Ministry of Interior, about 22,000 people from North Africa, mainly Tunisia, have arrived on Lampedusa and Sicily by boat.

While the majority were transferred to Sicily and other southern regions, or managed to escape controls, as of Mar. 27, 5,217 were still in Lampedusa. About 350 are unaccompanied children.

The Italian authorities have called the recent wave of migration across the Mediterranean a “humanitarian emergency” and have requested the assistance of the European Union including its external borders control agency Frontex in stemming the migration flows.

While the influx was largely predictable following the recent uprisings in the Arab region, the Italian government was mostly unprepared to handle the situation.

Migrants have been stuck in Lampedusa for weeks, waiting to be transferred to other places across the country. The refugee centre there can only accommodate 850 people.

Many have not been provided with the most basic humanitarian assistance, Amnesty International said.

Prime Minister Silvio Berlusconi visited the island on Tuesday and pledged the government would “clear Lampedusa within 48-60 hours”; however, it is still not clear where all the people will be transferred to.

Large ferries arrived at Lampedusa on Friday morning for the announced evacuation, but the boarding operations were suspended due to bad sea conditions.

Migrants in Lampedusa have not been provided with even the most basic humanitarian assistance such as shelter, medical care, mats, blankets and access to sanitary facilities, Amnesty has found.

There are no showers, no toilets and no shelters. “Around 4,000 people are currently sleeping outdoor,” Amnesty’s Charlotte Phillips told IPS. “Despite efforts by aid agencies on the ground, most Tunisians — already hit by poverty or violence in their country — have found themselves without the most basic of (sanitary) provisions.”

According to Phillips, the humanitarian crisis has been determined by the bad management of the situation. “No doubt it could have been avoided,” she said.

Most of the migrants interviewed by human rights organisations explained they left their countries in search of international protection; others have fled from tension and violence, or an untenable situation. Many have expressed the desire to continue their journey on to other European countries.

Humanitarian agencies fear that refugees are not given access to fair asylum procedures, because of the chaotic situation in Lampedusa, and that the government can decide on mass forced deportations without consideration of individual cases.

“The Italian authorities should also not assume that people arriving in Lampedusa are economic migrants,” Phillips said.

And this is true particularly for those who may be particularly vulnerable – such as pregnant women, children and individuals in need of medical assistance.

Approximately 350 unaccompanied children are in Lampedusa at the moment. One hundred of them have escaped controls and are now wandering the island, alone and exposed to bad weather conditions, according to the international charity Save the Children.

“The most urgent measure required for the protection of the children is the immediate transfer of unaccompanied children and those in family groups to the mainland,” said Carlotta Bellini, child protection manager at Save the Children. “Unaccompanied minors should be placed in residential care facilities for children which guarantee acceptable living conditions.”