MANILA, Apr 1 2011 (IPS) - Amidst political turmoil in Libya, thousands of migrant workers from the Philippines face a dilemma – either they risk their lives working in the conflict- ridden country, or they return home and face job insecurity. 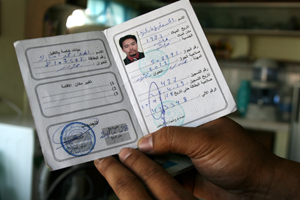 Exequel Masucal, a former Overseas Filipino Worker (OFW) who returned to the Philippines in March, originally wanted to stay in Libya and send his wife and four children home to safety. However, because of the children’s young ages and the dangers they faced crossing the border, he eventually decided to go with them.

“Normally, on Fridays, shops and offices are not open,” Masucal told IPS. “When the conflict started, it was like Friday everyday. You wouldn’t see any people on the streets. If three or four people gathered, they would be immediately dispersed.”

“During that time, we were really scared to go out. We couldn’t leave the house,” added Lilia, Exequel’s wife. “Schools were all closed because they had been turned into evacuation centres.”

Masucal started working as a computer technician 15 years ago for a Libyan employer. In 2005, he set up his own office equipment business. He and his family enjoyed a comfortable life in Tripoli – but in a flash, they lost their home, business, personal property, bank accounts and earnings when they fled the country.

“We left everything. Almost all Filipinos who left Libya weren’t able to bring anything – just their clothes. If you had a big bag, you’d eventually have to leave it at the border,” Masucal told IPS, adding that mobile phones and laptops were sometimes confiscated for “security purposes”.

As part of the voluntary repatriation programme, the Masucal family was able to ride the government-chartered ferry MV Ionian Queen from eastern Libya to the Greek Island of Crete, and from there they boarded a special flight dispatched by Philippine Airlines (PAL) that arrived here Mar. 10.

Since they arrived, they have been staying in Rizal, 20 kilometres east of the capital Manila, with Masucal’s parents.

“Other OFWs who returned home whom I’ve talked to are really depressed. They have no jobs yet and weren’t able to bring much money in their rush to leave. Some are actually ready to go back and risk the war just to earn again,” Masucal said.

Despite calls from the Department of Foreign Affairs (DFA) for Filipinos to return home due to the violent and uncertain climate in Libya, many preferred to put their lives in danger rather than risk unemployment.

“Filipinos are the only nurses left there, especially in the Tripoli Medical Centre,” Masucal says. “The European nurses and other nationalities all pulled out during the first week of the crisis.”

The DFA made a “last call” for OFWs to leave the country towards the end of March. Their latest figures show that approximately 1,600 of the more than 2,000 nurses in Libya have opted to stay behind. Around 800 nurses and their dependents are in Tripoli alone. Meanwhile, over 100 professors have also opted to remain in the country.

Prior to the crisis, the Overseas Workers Welfare Office (OWWA) estimated that there were approximately 26,000 Filipino migrant workers living and working in Libya. The majority worked in construction, oil and gas, hospitality and in medical and other service sectors, according to the Department of Labour and Employment.

According to the DFA: “Most Filipino workers were promised an increase in their salary if they stayed, while others were told they would lose entitlement to gratuity pay equivalent to one full month’s salary if they do not finish their contracts.”

Amnesty International (AI) has expressed concern about the safety of thousands of migrant workers who continue to remain in the country. At the outset of the conflict, AI called for guarantees of safety for civilians in Libya – especially those trying to cross the Tunisian border, including Filipino migrant workers.

“The decision of thousands of OFWs, some of whom decided to stay in Libya due to high financial pay, highlights the desperation of some Filipinos to seek greener pastures abroad despite the risks,” Aurora Parong, Director of AI Philippines, told IPS.

In an AI report dated Mar. 25, 2011, tales of horror were reported in Benghazi, including a rocket smashing a bedroom leaving a mother of six and her 11- year-old daughter with multiple shrapnel injuries all over their bodies.

AI called on the Philippine government to take steps to ensure that all OFWs who want to stay in Libya are treated humanely in accordance with international law.

“If necessary, the DFA must facilitate communication of OFWs with their families if they choose to stay in Libya. In the event that an OFW is detained and arrested, the government should take measures to identify the place of detention and provide the necessary assistance and ensure the safety and well-being of all Filipino migrant workers in Libya,” said Parong.

Masucal’s brother, who works in a military hospital, is one of those who chose to stay behind. “He says their location is relatively safe,” says Masucal, who has been able to keep in touch with him by mobile phone.

With the unstable banking and financial situation there, some Filipino workers are said to be more concerned about the difficulty in remitting money to their families back home, rather than the dangers of air strikes, and have asked the government to help them with their remittances.

Masucal says he will see how it is working in the Philippines. He has already applied for work in the field of computer office equipment. If it doesn’t work out, he says he has no choice but to find work abroad again.