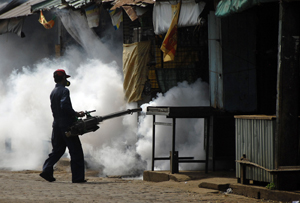 “We are seeing the results” of a new campaign against dengue now, Pabha Palihawadena, director of the health ministry’s epidemiology unit, told IPS.

In mid-2010 Sri Lankan health authorities were facing a catastrophe – the deadly dengue viral flu that had broken out in unprecedented levels was not showing any signs of slowing down. On the contrary the epidemic appeared to be gaining momentum.

During meetings held at the highest levels, health experts recommended drastic action, including fines and jail terms for those neglecting mosquito breeding areas. In May 2010, President Mahinda Rajapaksa’s government formed a presidential task force to fight the epidemic.

The ministry of health also organised dengue prevention weeks, awareness programmes in schools, and even private companies joined in. According to health experts this concerted effort has worked.

“This is an urban disease,” Sudath Peiris, the chief epidemiologist at the ministry of health said. “It spread so fast because in our houses and offices there was so much opportunity to breed.”

He said that Sri Lankans remained dangerously oblivious to how they helped the life-threatening disease to spread by not cleaning out water canisters with ornamental plants, waste water pits, and refuse like plastic cans, bottles, and tyres where stagnant rainwater allowed the mosquito to breed.

The largest concentration of infections was recorded in the densely populated western province which accounted for close to one-third of the infections and close to half of the deaths in 2010.

By the time the task force was in place, according to Palihawadena, a dengue epidemic that was first recorded in early 2009 was into its second year. In 2009, infections rose suddenly – by the end of the year, 35,000 had the virus and 346 were dead. It was an alarming spike compared to 2008 when only 6,600 infections and 28 deaths were recorded.

Five months after the task force was formed, in October 2010 only a single fatality was recorded and infections had fallen to the lowest levels recorded in the year, Peiris told IPS. In 2010, however in total there were 34,000 infections and 241 deaths.

“It was the punitive action that worked, when people realised that they were facing fines and jail terms, the breeding space quickly got cleaned,” Peiris said.

However, both warn that the country is not out of the woods yet. “The monsoon is coming and that will be the real test,” Palihawadena said.

In the meantime the government wants to replicate the success of the anti- dengue campaign to counter other diseases spread through mosquitoes like malaria and filaria.