KAMPALA, Apr 15 2011 (IPS) - The Ugandan opposition has announced it will continue protests against rising prices for fuel, food and other essential commodities, undeterred by violent police repression of the previous two days of action. 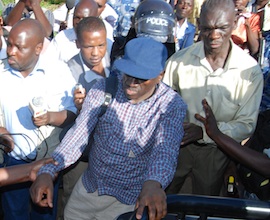 Opposition leader Kizza Besigye is led away from protest in Kampala. Credit: IPS

Across Kampala on Thursday, the air was filled with tear gas and the sharp crackling of volleys of rubber bullets as police broke up demonstrations. The city is braced for a repeat, with protests against a tuition hike also breaking out at Makerere University.

The “Walk to Work” protests against inflation are an ingenious twist on the protest march: the leaders of Ugandan opposition parties and civil society, united in a loose coalition called “Action 4 Change” announced they would be walking to work on Tuesday and Thursday, joining the hundreds of thousands of ordinary citizens who must already walk to work – unable to afford other transport in an economy in the grip of fierce inflation. The pump price for petrol has risen by 50 percent since January, to 4,000 Uganda shillings per litre – about two U.S. dollars.

Protesters – who came out across the capital Kampala, as well as in the towns of Jinja, Mukono, Gulu and beyond – want the state to step in to control rising prices, but the government argues that the inflation are due to a global crisis beyond its control.

“How much are they spending on buying tear gas?” cried demonstrator Isa Kirunda a who bakes pans at a road side kiosk near Kampala and supporter of the opposition Democratic Party “Can’t that money be used to subsidise fuel? This government must go. We are fed up.”

“We are fed up by this government,” shouted youth walking with the Forum for Democratic Change leader, just before they were confronted by police at Kasangati, not far from the residence of opposition leader Dr Kizza Besigye, who finished as runner up to long-standing incumbent Yoweri Museveni in presidential elections in February.

Forty eight people were injured in clashes with police deployed against the protest, according to Uganda Red Cross spokesperson Catherine Ntabadde. Media reports said a four-month-old baby died after being exposed to tear gas,and an unidentified woman was badly wounded when she was hit directly by a tear gas canister, tearing her stomach open.

Besigye, who lost presidential elections to the long-standing incumbent, Yoweri Museveni in February, was told by stone-faced officers that orders from above were that he would not be allowed to proceed. He refused to yield, and sat down on the edge of the gutter by the roadside.

The opposition leader enjoys passionate support in his home district, and he was quickly surrounded by supporters to prevent his arrest. An eight-hour standoff began, which ended only with when police fired rubber bullets to break up the crowd; Besigye was among those injured, taken to the hospital after a shot struck him on his right hand.

Police spokeswoman Judith Nabakoba denied police were responsible for the opposition leader’s injury. “Besigye could have been injured him self with a sharp object during the confusion.”

Doctors who attended Besigye at Kololo hospital said the third finger of his right hand was shattered by a rubber bullet.

The protest and heavy police response shut down the city, with vehicles arriving from upcountry unable to enter the city for much of the day. The army was called in to reinforce police as large numbers of people joined the protests.

Human rights activist Dr Livingstone Sewanyana told IPS that government action against peaceful demonstrators was illegal and in contravention of the constitution.

“What is wrong with people walking to work? Does it call for army deployment and the mayhem that has wrecked the city?” asked Sewanyana, executive director of the Kampala-based Foundation for Human Rights Initiatives.

Lieutenant Dennis Omara, spokesperson for the military police a battle hardened army unit usually deployed to quell riots if the police are over powered says regular police  asked them for reinforcements after rowdy protesters began barricading roads and lighting fires.

“We were only a backup for police because the security situation was running out of hands. The roads are now clear and people can move in and out of the city the situation is under control,” Omara told a press conference Thursday afternoon.

Dr Aaron Mukwaya, a lecturer in the social sciences department at Makerere University, says the demonstrations show a growing determination to push for change, and even larger protests should be expected.

He cautioned that the Ugandan government is most likely to respond with an iron hand to break the protests, with the recent events in Egypt, Tunisia, Libya and elsewhere in mind.