LAGOS, Apr 1 2011 (IPS) - As Nigerians go to the polls on Apr. 2, pre-election violence has raised fears the elections will not be free and fair. The campaign period has featured bombings and gun attacks on campaign rallies, politically-motivated assassinations and violent clashes between members of rival parties. 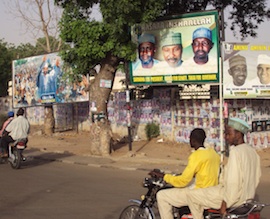 “The on-going violence could hinder large voter turnout on election days, as genuine voters may be frightened away from polling unit out of fear of being attacked,” warned the Nigeria Elections Situation Room, a coalition of Nigerian civil society groups campaigning for credible elections.

The Media and Information Committee on Emergency Management, a group which comprises spokespersons of emergency agencies and security outfits in Nigeria, says 12 of Nigeria’s 36 states have witnessed violence during the campaign. “These states have attracted more headlines and public attention to acrimonious activities among the political actors and parties,” says the Director of Defence Information and MICEM Chair Colonel Mohammed Yerima.

In the past two weeks, according to human rights group Amnesty International, at least 20 people have been killed in political clashes. Amnesty highlighted an incident on Mar. 22 that saw six people die in clashes between rival parties in the southern state of Akwa Ibom, and the burning down of a presidential campaign office in the state capital.

“The violence is causing immense damage to the country and its institutions,” said Amnesty Deputy Director for Africa Tawanda Hondora in a statement released Apr. 1. “Politicians need to immediately take responsibility for their actions and rein in their supporters before the elections dissolve into chaos.”

Amnesty says rights defenders face increasing threats of violence which will hamper their role as monitors will be crucial to the success of a series of elections for local, state and national office which begin on Apr. 2. The human rights organisation is also concerned by reports that security forces have carried out mass arrests and been issued with “shoot on sight” orders.

But few are surprised by the violent build-up to the elections.

“Power is sweet, and the truth is that the violence is all tied to the quest for power. That is why politicians are acting like wounded lions to get power at all cost,” Morris Alagoa of the Civil Liberties Organisation told IPS.

Election to public office promises control of billions of dollars of oil revenue.

The most intense struggle for position is at the centre, where power and access to billions of dollars of oil money is concentrated.

The incumbent, Goodluck Jonathan, who hails from the oil producing southeast of the country, is facing off against three candidates from the country’s north in the presidential election which will take place on Apr. 9.

The challengers include a former military ruler, Muhammadu Buhari of the Congress for Progressive Change, as well as the former head of Nigeria’s anti-corruption agency, Nuhu Ribadu, representing the Action Congress of Nigeria.

Several interest groups in the north are aggrieved that President Jonathan is contesting the election at all, which in their view is in breach of an arrangement within the ruling People’s Democratic Party, that the presidency should rotate between north and south.

But Jonathan initially served as vice president under a northerner, Umaru Yar’adua, only assuming the presidency in May 2010, after Yar’adua’s death from illness. Nonetheless, the Northern Political Leaders Forum, a group made up of northern Muslim leaders, is trying to persuade two of the northern candidates to step down, to clear the way for a single candidate to unseat Jonathan.

“It will surely be a difficult election for President Jonathan if he goes into a straight contest against only one of the northern candidates,” Tunde Akanni, a lecturer at the Lagos State University told IPS.

The argument over Jonathan’s candidacy opens a familiar fault-line in Nigerian politics, where political rivalry between the south and north – invariably regarded as Christian and Muslim respectively – has repeatedly led to violent clashes.

The Brussels-based International Crisis Group says more than 14,000 people died in ethnic and religious clashes in the West African nation between 1999 and 2009.

The government has ordered a countrywide deployment of soldiers and other security personnel in an effort to stop violence. On its part, the Independent National Electoral Commission says it will simply cancel the polls wherever there is violence, but there are fears that this will only encourage attacks.

“My concern is that people may cause violence in areas where they feel they are likely to lose so as to get the results cancelled,” Patterson Ogon, an opposition candidate contesting for a parliamentary seat in Bayelsa State in the Niger Delta told IPS. “The electoral body should investigate all violence before any result is cancelled.”

Not all observers are pessimistic. Former Botswanan president Festus Mogae, who is leading a Commonwealth Observer Group monitoring the elections, says violence may not be as widespread as is feared. “I am concerned. I am apprehensive, but I choose to believe that the level of violence will not affect the overall result of the elections,” he said.

Should elections run smoothly, security will be one of the first issues a newly-elected president will have to address. Key areas include the Niger Delta region, where an amnesty programme has failed to end attacks on the country’s oil industry. In and around the city of Jos, in central Nigeria, a cycle of revenge attacks between Christians and Muslims has claimed scores of lives since last year and in the northeast of the country, an insurgency by the Islamist group Boko Haram presents yet another major challenge for law and order.