RIO DE JANEIRO, May 13 2011 (IPS) - Despite “considerable progress” made in reducing poverty, “stark inequalities” remain in Brazil, as well as high levels of police and gang violence in poor urban neighbourhoods, Amnesty International warns in its annual human rights report, released as it reaches its 50th anniversary. 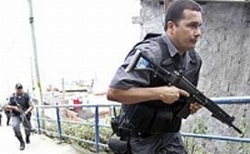 Security forces in an operation carried out in a favela. Credit: Rel-UITA

The “Annual Report 2011: The state of the world’s human rights” documents specific restrictions on free speech in at least 89 countries, cases of torture and other ill-treatment in almost 100 countries, and unfair trials in at least 54 countries.

In the chapter on Brazil, the London-based global rights watchdog says the country’s “favelas” or shanty towns continue to face “a range of human rights abuses, including forced eviction and lack of access to basic services.”

Although murder rates have come down in some cities, “high levels of police and gang violence in shanty towns” led to further inequalities.

The report notes that when President Dilma Rousseff took office in January, she said public security, health and the eradication of poverty would be top priorities for her government.

Amnesty refers to the success in bringing down crime rates achieved by “Police Pacification Units” installed in favelas in Rio de Janeiro. But it says that in areas not covered by that public security policy, “police violence, including killings, remained widespread.”

According to official statistics, 855 people were killed by police in situations described as “acts of resistance” in 2010, the report adds.

The rights group mentions the month of November 2010, when more than 150 vehicles were set on fire and police posts were attacked in Rio de Janeiro. In response, the authorities launched a major operation, deploying more than 2,600 police and armed forces troops in the Complexo do Alemão, a group of favelas on the north side of Rio de Janeiro, aimed at dismantling the city’s largest drug gang.

Amnesty also refers to the violence caused by militias, or armed paramilitary-style groups, and death squads largely made up of off-duty law enforcement officers.

The report points out that the recommendations set forth in 2008 by an inquiry into the militias by the Rio de Janeiro state legislature had not yet been implemented.

“It’s true that our recommendations have not been followed,” state lawmaker Marcelo Freixo of the Socialism and Freedom Party, who chaired the inquiry committee, told IPS.

“We made 58 recommendations in the inquiry committee’s final report, which are essential to combating the militias,” he said. “Almost none of the proposals were implemented by the federal government, or by the state and municipal governments.”

It is not funds that are lacking, but “political will,” he said. “It’s due to cowardice, because these should be measures taken by the state.”

Although arrests of people suspected of belonging to such militias have increased, the number of areas in Rio under the influence of paramilitary militias and death squads has grown even more.

Freixo said that in 2008, when the committee carried out its inquiry, the groups were active in 170 areas in the state, compared to more than 300 areas today.

“This number will go up, because the authorities have done nothing,” the legislator said. “An increase in arrests isn’t enough to fight the militias.”

Amnesty also reports that in São Paulo, Brazil’s largest city, there was a spate of “multiple homicides in which the perpetrators were suspected of having links to police death squads and criminal gangs.”

According to official figures, 240 people were killed in 68 incidents in greater São Paulo between January and late September, the rights group says.

It adds that the authorities have effectively lost control of many facilities, giving rise to a series of prison riots and murders.

In the northeastern state of Maranhão, for example, rival factions killed 18 prisoners, including four who were decapitated, in two prisons in October 2010. The riots broke out when prisoners began protesting the overcrowding, poor quality of food and lack of access to water.

The report also mentions violations of the right to housing, citing threats of forced eviction of poor communities because of plans for infrastructure works for the 2014 World Cup and 2016 Olympics Games, to be hosted by Rio.

When Amnesty International Secretary General Salil Shetty visited Brazil in April, he met with families who had lost their homes in police operations carried out without prior warning. Residents were made to sign documents relinquishing their homes in exchange for apartments in distant housing projects.

In addition, at least 750 families live in areas of Rio where freeways are to go in.

“Brazil is a signatory of international human rights treaties and conventions that commit it to guarantee adequate housing,” Shetty said in Rio on Apr. 27. “They need to follow through on their promise. The examples we have heard show that human rights are still not being respected.”