BRAZIL: Despite Historic Victory, Gay Rights Struggle Far from Over

RIO DE JANEIRO, May 16 2011 (IPS) - Although gay rights organisations in Brazil are celebrating a historic triumph, legal recognition of civil unions by the Supreme Court, they say the struggle is far from over. 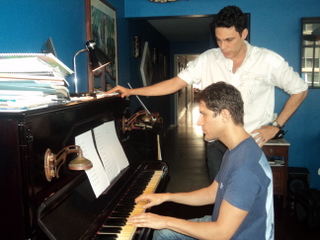 Artur Rodrigues (at the piano) and José Caminha in their house in Rio de Janeiro. Credit: Fabiana Frayssinet /IPS

Legal recognition of “stable homosexual civil unions”, approved unanimously by the country’s highest court on May 5, made Brazil the most populous country in the world to grant same-sex couples the same rights as heterosexual couples.

However, it did not give gays and lesbians the right to marry, as their rights groups are demanding.

Nor has a specific law on same-sex civil unions been passed. The lawsuit was filed two years ago by Rio de Janeiro state Governor Sergio Cabral and backed by the attorney general’s office, because a bill that would give homosexual couples equal rights has been stalled in Congress since 1995.

The Court’s legal recognition of equal rights does not exclude the right to adoption, which homosexuals could only do previously as single individuals. Nevertheless, the issue of adoption remains ambiguous and subject to legal action by each couple, say legal experts and representatives of associations of lesbian, gay, bisexual and transgender (LGBT) persons.

The ruling means that from now on, a homosexual couple merely have to prove they live together in a long-lasting stable relationship in order to access benefits like joint income tax returns, the right to add their partners to their health insurance plans, or the right to their partner’s inheritance or pension, or to alimony and property, in case of separation or death.

The ruling also brings recognition of seemingly simple rights, which are actually complex in practice, such as the right to care for a partner in the hospital or to authorise medical treatment for them.

“This is a way of inserting Brazil into a debate in which we were lagging behind,” José Caminha, a journalist and playwright who has lived with his partner, prosecutor Artur Rodrigues, told IPS.

“The whole world was moving in that direction and we felt we were far behind in the international scenario,” added Caminha. He and his partner make up one of the 60,000 same-sex couples who were officially counted in Brazil’s last census.

This overwhelmingly Catholic country of 190 million people has thus joined Colombia, Ecuador and Uruguay – the Latin American countries where civil unions are legal. Gay marriage is only legal in Argentina and Mexico City.

Caminha and Rodrigues had already registered as a couple before a notary public, but now they will not have to go to court to demand the rights enjoyed by heterosexual couples.

In Rodrigues’ view, “the symbolic value of the ruling is perhaps the most important thing.”

Both men are satisfied with the ruling, and say it is not necessary to move towards the legalisation of gay marriage.

Recognition of “the stable civil union meets our needs,” says Rodrigues. “I’m satisfied with having the same rights as a heterosexual civil union.”

“We don’t want to reproduce the model of heterosexual marriage,” says Caminha. “What we want is to have the same rights as any citizen.”

But Brazil’s LGBT movement does want to go for more, and has announced that it will immediately continue the struggle.

Julio Moreira, president of Arco-Iris (Rainbow), told IPS that the legalisation of civil unions is “a great victory” for the country’s homosexuals.

But the activist said it is important for Congress to pass a law on civil unions that would codify the rights recognised by the Supreme Court decision and explicitly address the question of adoption.

The bill introduced in 1995 has run up against resistance from conservative lawmakers in both houses of Congress and from the Catholic Church and the country’s powerful evangelical churches.

But Arco-Iris and other LGBT groups are calling for approval of another bill, which would legalise same-sex marriage.

However, the backlash from conservative sectors triggered by the Supreme Court verdict led to a successful attempt to pressure a legislative committee debating a law against homophobia to postpone the debate, a week after the ruling was handed down.

Among the differences between a civil union and a marriage, Moreira stressed rights like legal separation and divorce. “Stable civil unions merely recognise that there is a de facto relationship, but I can’t use the status of ‘married’ like I could in countries like Spain,” where same-sex marriage is legal, he said.

The activist said the question of the right to marriage also has symbolic importance, because it represents “one more step towards full rights.”

“If heterosexuals can marry, why can’t we?” he asked, after pointing out that the Brazilian constitution recognises equality of all citizens before the law, regardless of race, creed or sex.

In the lawsuit, the attorney general’s office argued precisely that failure to recognise same-sex unions violated the constitution’s equality and human rights clauses.

“In practice, there is still a difference between homosexuals and heterosexuals, in that the former still have fewer rights than the latter in Brazil,” Moreira complained.

Two legal experts consulted by IPS said marriages and civil unions were two different things, but that in practice they conferred the same legal rights.

Dalmo Dallari, a human rights expert at the University of São Paulo, emphasised that although the Supreme Court ruling gave homosexual couples the same legal rights as marriage, it did not actually recognise marriage.

From a rights standpoint, however, the legal decision “is sufficient in terms of recognition of reciprocal rights,” he added, underscoring hat civil unions now have “legal standing.”

Dallari said, nonetheless, that it is essential for the legislature to reflect the landmark ruling in a law that “codifies the rules,” because “if there is no law, it might be necessary to go to court in each case.”

Luis Mauricio Lindoso, an expert on family law in Brasilia, the capital, concurred that there is “practically no distinction” between marriage and a civil union, and said it was positive that the Supreme Court had decided to fill the legal vacuum that discriminated against gays and lesbians.

The two legal experts also applauded the fact that the courts had reached a decision that had been awaited for years from Congress, which must now follow the lead of the courts, rather than the other way around, as is usual.

Dallari and Lindoso said the Supreme Court verdict came as no surprise. “Although the Court is generally seen as conservative, it takes a non-conservative stance on family matters,” said Lindoso.

Dallari said the high court magistrates “work on the basis of principles that are in the constitution, which are the same for everyone.”

By contrast, the legislature is made up of representatives of a broad range of political currents, ideologies and social classes, whose starting point in debates is “their own personal situation.”