RIO DE JANEIRO, May 27 2011 (IPS) - The scarce funds and abundance of red tape that plague Brazil’s federal witness and victim protection programme, PROVITA, effectively discourage people from stepping forward with information and hinder criminal investigations, while weakening the protection of the families whose lives depend on the service. 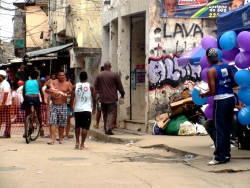 Paramilitary militias were eradicated from the Complexo do Alemão favelas or shantytowns, but are still active in nearby communities. Credit: Fabíola Ortiz/IPS

Nevertheless, PROVITA boasts of 100 percent effectiveness, reporting that not a single person under its protection has been killed.

“Witnesses are essential, and this service has to be strengthened, because we do not have a good system of (police) investigation, and many of the witnesses are the only available evidence to help solve cases,” Rio de Janeiro state legislator Marcelo Freixo of the Socialism and Freedom Party told IPS.

Although PROVITA is a federal government programme of the Special Secretariat for Human Rights of the Presidency, it is run in a decentralised manner. The government signs agreements with the states, which in turn work with non-governmental organisations that are in charge of providing assistance to the protected witnesses and their families.

In each state, the highest authority of the programme is the deliberative council, made up of delegates of the public prosecutor’s office, the judiciary, the Secretariat (or state ministry) of Social Defence, the human rights movement, and the associations of lawyers and psychologists.

To receive protection, witnesses of a crime must be in danger, offer testimony and information useful to the investigation, and voluntarily request assistance. In exchange, they are given housing, food and skills or job training for those who have to move away from their hometown or state. They are also supposed to receive social, psychological and legal assistance.

But the programme has been denounced for delays and for failure to deliver, as illustrated by the story that MAA and his family told IPS.

Rio de Janeiro is one of the most problematic states with respect to delivery of PROVITA funds and other assistance, along with Pará in the north and Ceará and Maranhão in the northeast.

The NGO that runs the programme in Rio de Janeiro has not received funds for four months, leaving the nearly 80 witnesses under its protection, along with their families, in a highly vulnerable position.

“In practice, this means the witness is going to die of hunger or his or her family could be evicted for falling behind in rent payments,” said Freixo, who chairs the human rights committee in the Rio de Janeiro state legislature.

According to the lawmaker, there are so many witnesses in need of protection in Rio that PROVITA cannot provide assistance to all of them. He said the programme has stopped accepting new witnesses or victims because it simply does not have the funds to cover them.

As a result of these difficulties, “witnesses end up becoming criminals or victims, even though they are people living under threat who have helped the state,” he complained.

Some 1,200 people in this country of 192 million are now in the witness protection programme. The press reported that PROVITA’s budget this year was not cut, and totals 8.5 million dollars. With these funds, the federal government finances around 80 percent of the costs of protection of the witnesses and their families, estimated at around 9,000 dollars a year per witness.

Since PROVITA was created in the 1990s, 4,500 people have received protection, including 1,500 witnesses. They receive coverage for two years, but that period can be extended. Four percent have dropped out of the programme.

In Rio de Janeiro witnesses are covered until the threat has vanished or until the person and his or her family are completely safe, prosecutor Renata Bressan, chairwoman of the Rio de Janeiro PROVITA deliberative council, told IPS.

Almost all of the families that request protection are poor and live in areas that have high levels of violent crime and drug trafficking or are controlled by paramilitary groups made up of police, soldiers and fire fighters.

“Some people don’t want to follow so many rules, even if they are under extreme threat. There are people who tend to break the rules,” which is grounds for being kicked out of the programme, said Bressan.

“People who are able to afford it find their own protection: they move away and they don’t ask for help from the state. But the programme helps many families survive,” he said.

Bressan acknowledged that PROVITA has suffered from shortcomings since it was established, but stressed that it is “100 percent successful in terms of keeping people safe – no witness under our protection has ever been killed.”

PROVITA emerged as a civil society response to the need to protect witnesses of murders committed by the police, organised crime groups or death squads. Today it provides assistance in cases of torture, slave labour, trafficking of weapons, people and drugs, corruption and election crimes.

It was created in 1996 at the initiative of the Legal Advisory Office for Popular Organisations (GAJOP) of Pernambuco in northeast Brazil, with support from the state public prosecutor’s office. The aim was to “break the cycle of impunity,” according to GAJOP, a highly respected human rights group.

Two years later, as similar schemes began to emerge in other states, the Justice Ministry’s National Secretariat of Human Rights granted them official status through agreements for technical and financial cooperation with state authorities and GAJOP, which started to help implement the new programmes.

In July 1999, a new law made PROVITA a federal system, and stipulated that a large part of its funding would come from the national budget, although the states would have autonomy in how the funds were used and NGOs would continue running the programme.

Bressan said that contracting out the service gives “a certain sense of tranquillity” because society feels there is a guarantee of neutrality.

“In Brazil, unfortunately, crime permeates politics and the secretariats of security. People have more confidence when the police are not directly involved in a programme like this,” he said.

Amnesty International’s Brazil researcher Patrick Wilcken told IPS that he has heard the stories about the shortages of funds and witnesses living in “precarious situations,” sometimes without even a home or incomes to survive on.

“I know the protection service is going through a rough time now due to a lack of funds and because they aren’t always delivered regularly. The problem is red tape in the federal system,” Wilcken said.

Amnesty plans to open an office in Brazil in the next few months, which will focus on protection for witnesses, among other human rights questions.