SANTIAGO DE CUBA, May 19 2011 (IPS) - Known as the cradle of the revolution and of the conga, but also as one of the most machista places in Cuba, the city of Santiago in the east of the island was the scene of two days of activities demanding respect and freedom for different sexual orientations and gender identities. 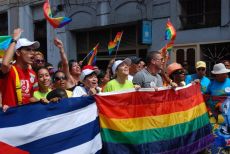 Panels, debates, workshops and other awareness-raising exercises were joined by the Conga de los Hoyos, a famous local carnival group, which paraded down several blocks of downtown Santiago Tuesday followed by a crowd of hundreds of people, some waving Cuban and rainbow flags, others frowning and gesturing their disapproval.

The view of this city as “the most machista” on the island could be an unjustified stigma, said Castro, who happens to be the daughter of President Raúl Castro. But lesbians and gays interviewed by IPS agreed that other parts of the country were “more open” compared to the almost daily attacks they experience on these streets.

“Two people of the same sex who love each other are often rejected and publicly attacked, verbally or even physically,” said Isbrailda Ruiz, a member of Las Isabelas, the first group of lesbian and bisexual women to be founded in Cuba, in 2002.

Intolerance is also found in the universities. Jorge Hadad, a social communication student, told IPS he thought the university environment would be “more permissive,” but instead encountered “professors who do not accept you as you are, and this has caused some clashes.”

Perhaps another symptom of reality in Santiago is the fact that people from this city hardly ever post their photos on the CENESEX friendship club website. “Anonymity is very much the norm here,” said Camilo García, a CENESEX worker.

Four years after the first Cuban celebration of International Day Against Homophobia, and less than a decade after systematic work to promote respect for sexual diversity began, the celebration this year emphasised the view that sexual rights are human rights, for everyone.

Prejudice can lead to discrimination against those with same-sex partners, or who were born male but feel themselves to be female, or who simply are women – more so if they are lesbian – or dark-skinned, or of mixed race, or because they live outside the capital, or are poor.

“If we unite overall against discrimination in general, I think we will make faster progress than if we tackle each type of discrimination separately,” said writer Daysi Rubiera, a member of the civil society Afro-Cuban association Cofradía de la Negritud who participated in the Cuban Day against Homophobia with her book “Aires de la Memoria”.

On the specific topic of homosexuality, debates in Santiago de Cuba ranged from the right to choose how, where and with whom to have sex, so long as no one else is harmed, to public displays of affection for a person of the same sex.

“Until yesterday, our thoughts on the subject were very different from what we are seeing today,” Major Luis Mariano Mustelier of the Cuban police acknowledged, in response to a question on police actions against same sex-couples kissing in public, or against transvestites or transsexuals.

Although such displays of affection do not constitute a crime, they are still considered offences under decree-law 141 of the Council of Ministers, which imposes a fine of 40 pesos (less than two dollars) on persons whose “indecent exhibitions” offend the public.

“A police officer who sees two homosexuals kissing, or dressed as women, and puts them in jail is breaking the law, because those are not crimes,” said lawyer Alexis Batista, an expert with the provincial justice authority, in response to participants’ questions. He acknowledged the decree-law “should be changed.”

Dr. Alberto Roque, an activist with the group Men for Diversity (HxD), talked about where the limits are and who sets them. “Who deserves our respect? The overwhelming majority that decides what the rules are, based on existing homophobia?” he said.

“This is no place for that,” said a passerby seeing an awareness-raising panel in Dolores square, right across from the Cuban Communist Party’s municipal headquarters. Meanwhile a young Rastafarian ponders why he should defend homosexuality when the Rasta movement, “which harms no one,” is itself discriminated against.

Over 400 students attended a debate at the Universidad de Oriente in Santiago de Cuba, which among other things discussed the homophobic prejudices of future lawyers, and the need for more heterosexual men to take part in awareness campaigns.

The CENESEX sexual diversity programme operates year-round, but made its biggest splash Saturday May 14 with conferences and debates in different sectors of society, film and video screenings, performance galas including drag artists and a conga against homophobia in Havana.

“In Cuba, we wanted to focus not on the victims of homophobia, but rather on the problem itself,” Mariela Castro told IPS.