DR CONGO: Sowing the Seeds of Food Security in Bandundu

KIKWIT, DR Congo, May 9 2011 (IPS) - Subsistence farmers in the Democratic Republic of Congo’s southwestern Bandundu Province are seeing their harvests double, thanks to an ambitious programme of support by the government. 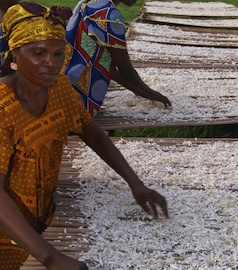 The Agriculture Sector Support and Rehabilitation Programme, known by its French acronym PARSAR, is providing smallholders with access to improved seed and advice on agricultural techniques as well as upgrading roads to ease their access to markets. The results have been strongly positive.

“Before 2008, our association worked hard and produced little: only one tonne of cassava or rice per hectare. But when PARSAR began to back us, the whole production picture changed. Every year since 2008, we have produced four or five tonnes per hectare of the Nsansa variety of cassava,” says Guy Lasere, coordinator of a group of 44 farmers in a district 140 kilometres from the provincial capital, Kikwit.

Lasere says the Mulele group belongs to a Village Seed Association, a grouping of 28 farmers’ collectives set up by PARSAR.

“PARSAR has set up 15 such seed associations, each comprised of between 20 and 40 smallholder organisations. These associations produce improved seed varieties and distribute them to farmers. They are coordinated by the Bandundu Smallholders’ Network which functions as a kind of union for these structures,” explains Amede Mungwele, another coordinator at PARSAR.

Support for agriculture and food security is among the topics being discussed at the Fourth U.N. Conference on the Least Developed Countries.

The International Fund for Agricultural Development views smallholder agriculture in terms of opportunities for rural people supplying the fast-growing markets for food in LDCs' own urban areas.


At Nsimulungu, 28 kilometres from Kikwit in Bulungu, another of PARSAR’s village associations is cultivating improved varieties of maize, rice, groundnuts and niébé – black-eyed peas.

“We have four collective fields, each covering 16 hectares. Since 2009, with the j124 groundnut variety, we have produced three tonnes per hectare, compared to one tonne in previous years. The same thing happened with the irat12 rice variety, which is currently yielding four tonnes per hectare, compared to only or two tonnes in previous years,” says the president of Nsimulungu’s association, Nestor Nkama.

The population of Bandundu province – and the DRC in general – has long endured food insecurity, despite conditions naturally suited to agriculture. This is due to long years of civil war as well as the lack of effective agricultural methods.

“The country has about 135 million hectares of agricultural land, which takes up 34 percent of the national land, and only 10 percent of this has been developed,” says the document.

It is in answer to this challenge that the Congolese government introduced the PARSAR development project in 2008.

“This project revolves around four components: institutional support, capacity building, support for agricultural production, and the rehabilitation of basic socioeconomic infrastructure. All this is being done thanks to the financial support of the African Development Bank amounting to nearly 30 million dollars,” explains Lambert Diango, president of PARSAR’s Bandundu branch.

“Every quarter, we show the subsistence farmers new production techniques,” says Jean Misiwense, a supervisor at PARSAR. “We give them the improved seeds provided by the National Agricultural for Study and Research in Agriculture, and monitored by the National Seed Service (SEMASEM). We also give them tools and equipment, and we carry out monitoring.”

According to Misiwense, the improved seeds have short growing cycles and high productivity levels. They are are also more resistant to plant diseases compared to other local seeds.

“At present, more than 200,000 households are benefiting from large quantities of good quality agricultural products. And more than 350 kilometres of road have been rehabilitated by the project to allow the smallholders to move their produce,” he adds.