WASHINGTON, May 2 2011 (IPS) - In the middle of the night, in an affluent suburb a little over 50 kilometres north of Islamabad, Pakistan, Osama bin Laden was gunned down in a compound shielded by barbed wire-topped walls up to five-and-a-half metres high. He resisted, United States officials say, fighting till the death as he had vowed he would. 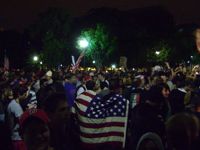 Celebrations in Washington after news of the killing of Osama bin Laden. Credit: Aprille Muscara/IPS

“The death of bin Laden marks the most significant achievement to date in our nation’s effort to defeat Al-Qaeda,” U.S. President Barack Obama declared in a surprise speech late Sunday evening.

“Yet his death does not mark the end of our effort,” he continued. “There’s no doubt that Al-Qaeda will continue to pursue attacks against us. We must – and we will – remain vigilant at home and abroad.”

“The fight against terror goes on, but tonight America has sent an unmistakable message: No matter how long it takes, justice will be done,” former president George W. Bush said.

The operation that killed bin Laden – a helicopter assault carried out by a small team of U.S. personnel – was years in the making; indeed, a decade. But, ten years after the September 11, 2001 attacks changed the calculus of U.S. foreign policy and launched a global “war on terror”, the abiding consequences of bin Laden’s demise remain to be seen.

Senior White House officials conceded that reprisal strikes by Al-Qaeda to avenge bin Laden’s death are possible, but stressed that the U.S. is taking “every possible precaution” to protect its citizens.

Some pundits, however, have been quick to note the largely figurehead role the Al-Qaeda chief has played in recent years, and are doubtful that bin Laden’s now permanent absence will change the organisation’s operations in any significant way.

Another outstanding question is the impact of the U.S.-led operation “deep inside Pakistan”, as Obama described it, on an already strained U.S.-Pakistan relationship.

Senior administration officials said that Islamabad was kept in the dark about the pre-dawn raid that killed bin Laden in order to ensure the safety and success of the operation.

“We shared this with no other country, including Pakistan,” a White House official told reporters after Obama’s speech. “We believed it was essential to the security of our personnel. Shortly after the raid, we contacted senior Pakistani leaders to brief them.”

“Over the years, I’ve repeatedly made clear that we would take action within Pakistan if we knew where bin Laden was,” Obama said in his speech. “That is what we’ve done.”

Obama green-lit the operation on Friday, Apr. 29, eight months after U.S. intelligence pinpointed the location of a courier known to be a protégé of Khalid Shaikh Mohammed, the mastermind of the 9/11 attacks, and considered to be among bin Laden’s trusted few.

The courier was tracked to an unusually well-protected compound in Abbotabad just 700 metres from the Pakistan Military Academy, the symbolic heart of the country’s armed forces and its focal training centre.

“We were shocked by what we saw,” a senior administration official said, recalling the “extraordinarily unique compound” housed on a plot of land about eight times larger than those nearby, located at the end of a narrow, dirt road in a relatively secluded area.

Worth one million dollars, the compound was protected by a series of walls three-anda-half to five- and-a-half metres tall, but had no Internet or telephone services, the official said.

“The final conclusion from an intelligence standpoint was two-fold,” another official said. First, a “high- value asset” was housed within the compound; and second, “there was strong probability that that person was Osama bin Laden.”

“Our best assessment, based on a large body of reporting based on several sources, was that bin Laden was living there with several family members,” the official added.

Islamabad was not given prior notice of the Abbotabad raid, which also resulted in the deaths of three other adult men and one woman and injuries to two women, according to senior White House officials. But “it’s important to note that our counterterrorism cooperation with Pakistan helped lead us to bin Laden and the compound where he was hiding,” Obama noted in his speech.

“Indeed, bin Laden had declared war against Pakistan as well, and ordered attacks against the Pakistani people,” he added.

“Tonight, I called President Zardari, and my team has also spoken with their Pakistani counterparts,” Obama said. “They agree that this is a good and historic day for both of our nations. And going forward, it is essential that Pakistan continue to join us in the fight against Al-Qaeda and its affiliates.”

But the response in Pakistan has been less than celebratory. Bilateral relations remain shaky, with the case of CIA operative Raymond Davis still fresh, reports of civilian casualties due to U.S. drone strikes continuing, and protests gathering pace in recent months over U.S. military operations in the country.

“Now it’s proven that Al-Qaeda and other terrorist organisations are not based in Afghanistan, and Pakistan is a haven for them,” Abdullah said.