KARACHI, May 2 2011 (IPS) - Shabbir Hasan, 49, was woken up in the dead of the night to the sound of the “roar of a really low-flying helicopter.” Hasan, a businessman, has lived in the hill station in the Khyber Pakhtunkhwa province all his life. The sleepy town is known for its educational institutions – and military establishments. 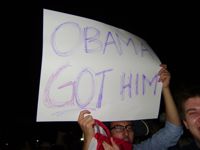 Many gathered outside White House to hail news of the killing of Osama Bin Laden. Credit: Aprille Muscara/IPS

“All kinds of dreadful thoughts went through my mind, but never in my wildest of imagination did I imagine who was hiding in my neighbourhood,” Hasan told IPS on phone from Abbotabad. Before he could go back to sleep, the whole family was awake, this time after a huge explosion. “We put on the television and it said a helicopter had crashed, that’s all.”

They all went back to bed despite gunfire shots being heard from a distance. In the morning around 7:30 am, Geo, a private TV channel, broke the news of the death of some “high value target” in Abbotabad in a military operation.

At 8:30 am (Pakistan time), U.S. President Barack Obama made a speech, calling it a “good and historic day”. Osama bin Laden, 54, had eluded the world’s biggest manhunt for years. He was “shot in the head” and killed in a mansion in Abbotabad Sunday night.

His body has been taken by the U.S. troops to Bagram airbase in Afghanistan, news reports say. From there it is expected it will be flown to the U.S.

“The elimination of Bin Laden by U.S. special forces in Abbottabad, just a few tens of miles from Islamabad and home to a big military academy, is a huge embarrassment for Pakistan’s military and civil establishment,” Pervez Hoodbhoy, academic and peace activist told IPS.

“For over a decade they had, on every occasion, strenuously denied his presence in Pakistan. But how could the world’s most wanted man have lived in luxury for so many years, out of sight of our powerful and ubiquitous intelligence services?

“This may be a transformational moment: it may no longer be possible to continue with the policy of verbally condemning jihadism while tacitly supporting it.”

Besides the 9/11 attack, Bin Laden has also been linked to a string of attacks including the 1998 bombings of U.S. embassies in Kenya and Tanzania and the 2000 bombing of the warship USS Cole in Yemen.

“I don’t buy this news!” Najma Sadeque, a senior journalist told IPS. “From the reports we had been getting for years, he should’ve died years ago because he was an ailing man.”

Many in Pakistan, who considered him a hero for taking on the U.S., are bound to be saddened. “He will now become an even bigger hero, because he died fighting and was not captured,” said Rahimullah Yusufzai, a senior journalist.

“Al-Qaeda will use this image to rally itself,” he said, but adding, “with the Laden gone, Ayman al- Zwahiri, the next in line, will not be able to muster the same support.”

Defence and military analyst Hasan Askari Rizvi sees several consequences from the death of Osama Bin Laden. “The groups affiliated with the Laden philosophy may resort to violence,” he said talking to IPS on phone from Lahore.

“They will try to hit Pakistan for cooperating in this,” agreed Yusufzai, adding: “But then they had been targeting Pakistan even before this happened. There will be no respite.”

The killing has proved that Pakistan has cooperated with the U.S. by providing information, Rizvi said. But what will be more problematic is that “it has been proved true that he was hiding on our soil and now the U.S. will exert pressure on Pakistan to hunt out other targets.”

Yusufzai said the arrogance of the U.S. will increase further now that they have succeeded in killing their biggest enemy. “It will mean a more inflexible foreign policy towards us.”

He warns that the U.S. will now want Pakistan to cooperate in its targeting of the Haqqani network, a terrorist group aligned to Al-Qaeda. “While there were no two opinions in defeating and destroying Al- Qaeda, I’m not sure if Pakistan would be ready and forthcoming as far as that is concerned.”

Rizvi is perplexed by the Pakistan government’s silence. “It’s very unusual as well as disappointing; it makes me wonder what story they would be busy cooking to give to the people.”

Brigadier Asad Munir, former chief of military intelligence and the Inter Services Intelligence (ISI) in the Federally Administered Tribal Agency and Khyber Pakhtunkhwa province, says the killing “has proved to everyone that the Pakistan-U.S. relations are not as strained as they have been portrayed in both the local and international media. This was a joint ISI and CIA operation and so while friction may exist between the two, it had not come to any breaking point as assumed.”

Munir said Pakistan cannot fight the terrorists without the help of the U.S. and at the same time, the U.S. cannot withdraw from Afghanistan without the cooperation of Pakistan. “It needs Pakistan to clear the tribal area of the Taliban.”

Like Askari and Rizvi, Munir, too, foresees anger among splinter groups who had supported Osama bin Laden in the form of terror attacks, for which he said the government should be prepared.

“But the fact remains, in the death of this historic symbol of anti-Americanism and militant Islam, there will be an immediate weakening of the movement. He will be considered a martyr by many people, but the anti-Americanism he had cultivated will not germinate. Such sentiments need a proper organisation that can propagate continuously. With him gone and others on the run, this will also lessen.”