PERU: No Easy Choice for Women in Presidential Runoff

LIMA, May 20 2011 (IPS) - In other circumstances, many women in Peru would be celebrating the possibility of a female president for the first time in the history of their country, or the alternative: the triumph of a candidate who promises to improve things for the poor. But both candidates taking part in the Jun. 5 runoff draw heavy opposition or awaken serious doubts among women’s groups. 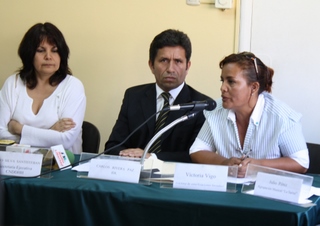 The second round of elections, in which Keiko Fujimori, the daughter of the former president who launched a campaign of forced sterilisation of thousands of poor women, and Ollanta Humala, a former military officer stigmatised for leading a failed coup in 2000, puts the women’s movement in a bind, activists say.

“I always wanted to see a woman elected president of my country, but with Keiko there is no possibility that women would be respected. ‘Fujimorismo’ is used to governing with impunity and corruption,” Victoria Vigo told IPS, with the vehemence of someone who was a victim of forced sterilisation in 1996, during the regime of Alberto Fujimori (1990-2000).

The former president is serving more than 25 years for crimes against humanity and corruption in a prison on the outskirts of Lima. Fujimori’s critics say he has organised his daughter’s campaign from his prison cell, while his release, by means of legal manoeuvres, is being prepared in case she is sworn in on Jul. 28.

The polls show a tight race. In the latest survey, by the Apoyo polling firm, Fujimori, the candidate for the Fuerza 2011 party, had 51.1 percent support and Humala, of Gana Perú, 48.9 percent.

The surveys also reflect widespread rejection of both candidates. Analysts say that in Humala’s case, this is especially due to his proposed changes in economic policy, which could scare off private investment, and to his ties with controversial Venezuelan president Hugo Chávez.

His rival, meanwhile, suffers from her father’s legacy of systematic human rights violations and corruption, observers say. They also point out that her campaign has been tainted by allegations of links with drug trafficking. Another stain on her reputation is her close ties with her father’s powerful former security chief, Vladimiro Montesinos, who is also in prison for human rights abuses and corruption.

Vigo is one of the victims of Fujimori’s policies. At the age of 30, the then resident of the northern region of Piura was 32 weeks pregnant when she delivered prematurely. She was sterilised without her knowledge or consent. Her baby died shortly after birth.

Forced sterilisation formed part of a government family planning policy implemented from 1996 to 2000.

Human rights groups brought collective legal action on behalf of 2,000 women and 74 men, whose forced sterilisation was formally documented by the office of the ombudsman. (The Peruvian state has admitted that 300,000 sterilisations were performed under the family planning programme.)

In November, the Inter-American Commission on Human Rights condemned the Peruvian state’s failure to fulfil a friendly settlement agreement in which the state agreed to investigate and bring to trial the government officials who devised and implemented the forced sterilisation campaign, and to pay damages to victims. The IACHR is now studying measures to enforce the agreement.

Harking back to such abuses, women’s rights groups and victims like Vigo are taking part in the “Fujimori Never Again” campaign launched this month by the National Coordinator for Human Rights, an umbrella group.

“No one has yet been held accountable for what was done to these women,” Rossy Salazar, a lawyer with DEMUS, a women’s rights organisation that has taken part in local and international legal action in the case, told IPS. “To the contrary, those who were presumably responsible have been recycled, in Keiko’s team.”

María Méndez, Fuerza 2011’s spokeswoman on gender and children’s issues, told IPS that Keiko Fujimori has already apologised for the crimes committed during her father’s administration, and has stated that “the things that were done wrong” will not be repeated if she is elected.

“We will heed whatever the international bodies say, we will respect the reproductive rights of women, and we will reject any practice that undermines or violates their rights,” Méndez said.

The executive secretary of the National Coordinator for Human Rights, Rocío Silva, told IPS that neither Keiko Fujimori nor Humala have put an emphasis in their speeches on fighting discrimination against women.

But she added that Humala’s team at least includes professionals who have worked in that area, while on Fujimori’s team there are people who have violated women’s rights.

Silva also said there is another aspect of Fujimori’s candidacy that has caused concern. Those around her include people close to the most conservative sectors of the Catholic Church, which would point to limitations on health policies that respect women’s reproductive rights.

For example, Fujimori’s running-mate is Rafael Rey, a member of the ultraconservative Catholic organisation Opus Dei and a former defence minister who was behind a legislative decree aimed at securing the release of members of the military accused of human rights abuses during the 1980-2000 counterinsurgency war.

Nor is there good news for women in Congress. In 2006, 35 women were elected, compared to just 28 in the April elections, even though there will be 130 members in the legislature that will be sworn in next July, 10 more than the previous legislature.

Of the 28 women elected, 12 are Humala allies and nine are pro-Fujimori, while the rest belong to four other political forces.

Gana Perú’s campaign platform does include a section dedicated to gender policies and the status of women, unlike Fuerza 2011’s programme.

Spokeswoman Méndez argued that the lack of any specific mention of such questions is because they are cross-cutting issues present in every aspect of the party’s platform.

Salazar, the DEMUS lawyer, described Gana Perú’s platform as more progressive, and said Humala is the candidate that offers better guarantees to improve things for women, although she acknowledged that he has been associated with “machista” stances and gestures, arising from his training and past as a military officer.

Aída García, a spokeswoman for Gana Perú, told IPS that if Humala wins, his government will double the number of beneficiaries covered by a programme that provides a monthly stipend of around 36 dollars to families in the poorest parts of the country, and to single mothers.

In addition, a new anti-poverty programme, targeting children up to the age of six, would be implemented in the poorest areas, she added.

García said Humala met this month with women’s social organisations to make commitments that go beyond the “welfare-style and clientelist policies” implemented by Alberto Fujimori through a system of government-assisted soup kitchens and the “glass of milk” nutritional supplement programme.

Fuerza 2011’s Méndez said, meanwhile, that the government’s support of the soup kitchens will help fight chronic malnutrition, and the women in charge of the feeding centres will be trained in that effort. She also said violence against women will be fought through education, communication, prevention and punishment.

“The ‘Fujimoristas’ can say what they want, but their deeds condemn them,” said Vigo. “The consequences we are still living with today cannot be erased. Who has punished the culprits? We have memory and dignity.”