UNITED NATIONS, May 4 2011 (IPS) - “In South-South cooperation we are all partners,” Josephine Ojiambo, ambassador of Kenya to the U.N. and president of the U.N. General Assembly High-Level Committee on South-South Cooperation, told IPS. “SSC specifically shies away from the donor-client relationship.” 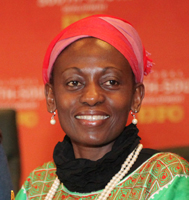 In the run-up to the 2011 Fourth U.N. Conference on the Least Developed Countries (LDC-IV) in Istanbul, IPS talked with Ojiambo about how Southern solutions could complement North-South cooperation with LDCs. Excerpts from the interview follow.

Q: What makes South-South sharing so helpful for LDCs? A: The countries of the South are a tremendous source of tested solutions to development challenges faced by all developing countries especially the LDCs. SSC offers new concrete ideas, models and practices for LDCs and thus provides major additional opportunities. Additionally, Southern countries tend to offer technologies and solutions that are more appropriate to the special needs and circumstances of LDCs, given their similarities in environment, background or development path.

Developing countries – regardless of their size or level of development – have something to bring to the table… Today when LDCs participate in international negotiations, particularly as a group, they are able to exercise a stronger voice at the table while also bringing forward appropriate technologies, agricultural models, and other successful solutions.

Southern countries are now at the centre of the new geography of international trade – as producers, traders and consumers in global markets… South-South [Foreign direct investment] FDI flows peaked at 187 billion dollars in 2008 (representing 14 percent of the total global FDI), up from 12 billion in 1990 (4 percent of the total global flow). The LDCs have been major recipients of FDI from other countries of the South – accounting for 40 percent of total FDI from developing countries.

Q: Do the emerging southern powers – India, Brazil, and South Africa (IBSA) or China – help LDCs within a South-South framework? How? A: Many developing countries have developed substantial knowledge and acquired capacity and experience in setting up dynamic successful institutions for social and economic management, as well as for science and technology development and environmental management. There is now the potential for the sharing of concrete experiences among the South – with development-replicating value. A win- win scenario for all partners.

Examples of some success stories are the ‘Bolsa Familia’ hunger alleviation programme of Brazil, the ‘National Food for Work Programme’ of India, and the central regulatory and liberalisation policies followed by China. These are potentially useful practices to be replicated in other countries.

China and India both also have Africa strategies, which is relevant given the large number of LDCs within the continent.

Q: Building on the Nairobi Outcome of the High Level U.N. Conference on South-South Cooperation a large number of LDCs have called for an international programme of action aiming at reducing the number of LDCs by half over the next decade. What concrete steps can be taken at the upcoming LDC- IV to put LDCs on track to meet this goal? A: At LDC-IV delegates have to agree on how the successes of the Global South over the last two decades can be translated into solutions to the numerous development challenges faced by LDCs in areas including: food security, agricultural/industrial productive capacities, climate change, public health, education, desertification, trade and investment, infrastructure, transportation, information and communications technology.

The Delhi Declaration – adopted by Foreign Ministers, Ministers, and Representatives of the LDCs and India at the India-LDC Ministerial Conference in February – stresses that the interconnected and globalised world has made it essential for the international community to accord its highest priority to the cause of LDCs.

The international community must express its highest political commitment in support of the Istanbul Program of Action as well. There is an urgent need for the development community to further its engagement with LDCs by helping to enhance their productive capacities, through such means as private sector development, the transfer of productive technologies, and the enhancing of LDCs’ enabling environments.

By developing their productive capacities, LDCs will be empowered to mobilise domestically the resources needed to finance their economic growth, thus lessening their dependence on aid and attracting the sort of private capital inflows that can support their development.

Of special importance is the need to commit to specific measures needed to boost LDC productive capacities – delegates emphasised at the February preparatory meeting for LDC-IV in India.

South-South and triangular cooperation, particularly that which engages the private sector through public-private partnerships, have the potential to play a significant role in this agenda as the South is home to many successful examples of effective partnerships, innovative technologies, and sustainable solutions to the very challenges faced by LDCs.

Now, more than ever, it is critical that the development community utilise South-South, triangular and public-private partnerships to empower LDCs’ in poverty reduction, employment creation and sustainable development, enabling LDCs to truly integrate into the international economy, engage in beneficial trade, and escape the poverty trap.

The UN Office of the High Representative for the Least Developed Countries, Landlocked Developing Countries and Small Island Developing States (UN-OHRLLS), which serves as the coordinator of the LDC- IV process, has mobilised the entire U.N. with a view to deliver a comprehensive, action-oriented and meaningful outcome of the conference, including concrete deliverables.

In response to this call, the Special Unit for South-South Cooperation will be hosting an event entitled ‘South-South Development Roundtable: Building Productive Capacities of Least Developed Countries through South-South, Triangular and Public-Private Partnerships.’ The main objective of the roundtable is to showcase announcements of concrete plans for the successful transfer and scaling-up of actual mechanisms for increasing the productive capacities of LDCs through the effective and efficient application of South-South, triangular and public-private partnerships… The event will feature several presentations of successful, transferable Southern mechanisms… each of which will include a comprehensive description of the mechanism and its expected benefits, and announcement of concrete plans and financial commitments for its transfer and scaling-up.

SSC operates on very different principles from those of Northern donor aid. Not only does SSC encompass financial flows, such as loans and grants for social and infrastructure investment projects and programmes, but it also embraces cooperation through experience sharing, technology and skills transfer, preferential market access and trade-oriented support and investment, transmitting and stimulating similar kinds and levels of development, generating employment and building capital and capacity.

However, despite rapid progress in South-South cooperation in scale, scope and dimension, there are limitations also – as Southern countries, particularly LDCs, face huge challenges in terms of a high prevalence of poverty, malnutrition, and unemployment, serious deficits in infrastructure and productive capacities and the impact of external shocks. North-South cooperation and triangular partnerships remain critical in this regard.

Southern development opportunities can be brought to the table through multilateral mechanisms, such as the U.N. Fund for South-South Cooperation managed by the Special Unit for South-South Cooperation hosted by UNDP. The multilateral development system can be a bridge between the countries of the South and Northern partners – it can mobilise donors and be a catalyst for developed and developing countries to intervene where and when needed.

Q: What are limits of South-South cooperation in supporting LDCs? And why? A: Funding and resources are significant limits. In the last few years, during the financial crisis, LDCs are expressing concern that even past development gains have been eaten away.