ESCORT, South Africa, May 17 2011 (IPS) - Victoria Zanele KaMagwaza-Msibi admits she is no angel. But for 30 years she’s navigated through South Africa’s tough political landscape, mainly as a member of a male-dominated party, and now as the leader of her own political party. 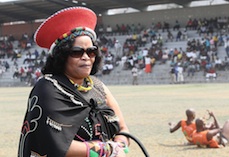 ”I’m not an angel. I haven’t forgotten. It left pain in my heart to leave a party that I invested 30 years of (my) life in. But I have tried to channel that pain into a constructive realm. I insist on the idea that democracy and women’s advancement must be promoted within a political organisation,” KaMagwaza- Msibi says.

They are the words of a tough South African woman who is now leader of the newly formed National Freedom Party (NFP). KaMagwaza-Msibi (49) left the Zulu nationalist Inkatha Freedom Party (IFP) and her post as its national chairperson under acrimonious circumstances in January to form the NFP.

Born in Makhosini near Mahlabathini, in KwaZulu-Natal, she is a teacher by profession and obtained her primary teachers’ diploma at KwaGqikazi College of Education. But KaMagwaza-Msibi is much more than that. She has navigated a difficult political system and opened up doors for female advancement.

She made a name for herself by becoming the first female chairperson of the IFP, a male-dominated party. She also opened doors for women through the implemention of projects meant to improve the financial well being of women in the Zululand Municipality, where she was mayor.

But it has not been an easy ride to the top for KaMagwaza-Msibi.

”When a woman tries to move on to higher office, she risks losing the advantages of her super- volunteer status at the local level. She becomes perceived as personally ambitious rather than a high- minded, dedicated public servant. You are caught in the bind of your femininity,” she explains.

KaMagwaza-Msibi has embraced her feminine virtues, edging into the old boys’ network, cutting deals in smoked-filled rooms and promoting the economic and social causes affecting women.

“It’s true, the best man for the job is always a woman. It is women who experience sexual harassment on the job, violence in the home, (and) who are still the primary care givers. If we are going to have a representative government, we have to have women in high office,” she says.

Generally seen as the blue-eyed girl of the IFP’s president, Mangosuthu Buthelezi, KaMagwaza-Msibi was considered to have literally hit the KwaZulu-Natal political scene with a bang. The IFP has had previous women leaders, such as the two former education MECs, Faith Gasa and Eileen kaNkosi-Shandu. But KaMagwaza-Msibi has gone a long way in defying the real or imagined stereotypes about the IFP.

She was also nominated as the party’s first female premier candidate for KwaZulu-Natal ahead of the 2009 elections. But the party did not win the majority in KwaZulu-Natal and she was not elected to the post of premier.

But later her relationship with the IFP soured and KaMagwaza-Msibi was accused of sowing division in the party when her supporters started campaigning for her leadership of the IFP. In January she lost a court application to force the IFP to hold an elective conference and to prevent it from taking her to a disciplinary enquiry. This led to the launch of the NFP.

Most of the members of the NFP say KaMagwaza-Msibi’s leadership is not just a symbol and a statement, but a breakthrough.

“She is an amazing woman. She broke one huge barrier, which includes defying male dominance in the IPF,” says Rosemary Mmantombi Ngubane an NFP candidate in the uMhlabuyalingana Municipality elections.

“(She is) an inspiration to women across the country even (during) her days as IFP national chairperson and Zululand mayor. Her vision, dedication to duty, paved the way for improving women’s access to political office and reducing statistical discrimination,” Ngubane adds.

KaMagwaza-Msibi is not a believer in fielding female candidates just to meet the gender quota system. She says these quotas reinforce stereotypes that women are not worthy of being elected on their merits.

But KaMagwaza-Msibi adds that women’s representation at local government level is very important since women can put the needs of women voters first. She says that “women still face numerous obstacles both as candidates and voters.”

“Women voters play an important role (and continue to) elect male councilors due to an internalised bias against women as politicians, as a consequence of socialisation. Very often patronage plays a role in the election of local councillors as a reward for loyalty to parties or ethnic groups. This is what the NFP is going to remove,” she says.

There is a slight increase in the number of women running for election in this year’s local government elections. More than 19,700 women will stand as candidates, compared to 15,718 in the 2006 local elections. This means that 37 percent of the candidates are women, a two percent increase from 2006. Women remain the majority on the Independent Electoral Committee voters’ roll, which has more than 24.5 million South Africans registered. A total of 121 political parties will contest the local government elections on May 18.

But even a wave of victories by female candidates will not make women dominant in local governance. Should a female candidate win in every possible race, local authorities will still be 67 percent male.

KaMagwaza-Msibi is full of confidence that the NFP will win in Zululand, where she was a very popular mayor before being deployed by the IFP to the Pietermaritzburg Legislature.

The NFP is only four months old but has fielded 2,591 candidates in eight provinces for the coming local government elections. More than 50 percent of its members are in KwaZulu-Natal where it was founded.

“What is unique about her is her modus operandi. Most of the leaders of the breakaway parties formed interim leadership structures and put people in positions temporarily. This, as we have seen with Cope, made these people refuse to vacate these positions later,” he says.

Mazibuko says that the NFP has not done this but has instead formed branches.

“It has formed branches with the intention of letting branches elect leadership at a later stage. That distinguishes it from others and it gives this new initiative some semblance of being democratic,” says Mazibuko.

He also notes that KaMagwaza-Msibi is a very popular leader, albeit mostly in rural areas.

“That might be seen as a negative. But she could also win a lot of sympathy backing given that she is generally seen as a person who has been persecuted – by men. Instinctively women will identify themselves with that party,” says Mazibuko.

KaMagwaza-Msibi admits that she has seen most of the post-1994 parties struggle to survive. Parties such as the National Democratic Convention, the United Democratic Movement and Cope have struggled to make it and convince people that they are an alternative to the ruling African National Congress.

She says her party is not made up of a “bunch of angry people” and has hard workers who have excelled as leaders in many spheres in KwaZulu-Natal. “We have taken note of these parties’ failures and used them as a case study. We will work on a more democratic process and also build on members’ principles,” she says.

She has held elected office for more than half her life and in her people see a strong, solitary figure who consoles herself with mountains of work.

“I’ve always wanted to serve others, to brighten people’s darkest days. It is about understanding the depths of people’s anger and despair,” KaMagwaza-Msibi explains. “You know, I get angry, too. I understand the anxiety, not just in KwaZulu-Natal but all across South Africa.”