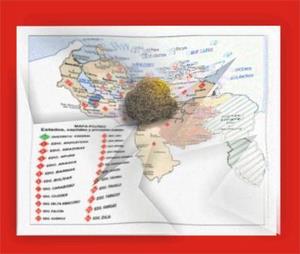 The ARA network, a coalition of 20 environmental organisations, recently launched its report “Aportes para un diagnóstico de la problemática ambiental de Venezuela” (Contributions to a Diagnosis of Environmental Problems in Venezuela), which contains interviews with 34 experts and calls attention to shortcomings in the state and society’s management of seven environmental issues.

The assessment is in line with the results of an annual survey of more than 130 academics and professionals that has been carried out for the last decade by Vitalis, a local environmental organisation.

Alejandro Álvarez of Ecojuegos, a member organisation of the ARA network, told IPS: “Poor management is shown by the fact that in this country, where over 40 percent of the territory of 900,000 square kilometres is protected, only one percent of the government budget is allocated to the Environment Ministry.”

Diego Díaz, the head of Vitalis, told IPS that “year after year the same problems crop up, showing the lack of efficient management strategies and the accumulation of environmental liabilities, such as forests that are lost, water sources that are degraded, soils that are not regenerated, materials that are not recycled, and increasing pollution.”

The Environment Ministry recognises that “environmental services like the supply of drinking water, production of hydroelectric energy, food and pharmaceutical products, the tourism industry and protection against natural disasters” depend on “adequate conservation” of biodiversity.

Venezuela is ranked the ninth country in the world for biodiversity, as it is home to 650 types of vegetation, 15,820 species of vascular plants, 27 climate zones, 23 types of relief and over 137,000 animal species.

It is also ranked fourth for the number of species of amphibians, sixth for birds, eighth for mammals and ninth for reptiles.

But the ARA study says that 748 species of fauna are under threat, including 160 of the 312 species of amphibians, as well as 341 plant species.

The country is among the world’s top ten for deforestation. At the close of the 20th century, over half its territory was covered by forests, but the forested area is shrinking by an average of 290,000 hectares a year, equivalent to more than one percent. As for pollution, “crude oil production, the main economic activity, has an environmental impact locally. However, the impact of refining the crude, and especially consumption, is much greater,” said Álvarez.

Venezuela refines over one million barrels of oil a day, producing emissions of carbon dioxide and other gases and sulphur and coke residues, and its fleet of 5.5 million vehicles consume some 80 million litres of fuel a day.

In the congested streets of Caracas, a concrete jungle set in a valley where five million people are crowded elbow to elbow, 2.3 million cars and one million motorbikes circulate, according to figures supplied by the mayors of the city’s five municipalities.

“We have no precise figures for pollution, but the country has over 300 large waste dumps open to the skies. Much of this waste is burned, and who knows what quantities of dioxins and furans are being produced?” said Álvarez.

Dioxins are stable chemical compounds that contain chlorine and are produced by burning. They are fat-soluble and pollute soils, sediments, the food chain and organic tissues. Furans are volatile liquids that cause cancer.

The 2001 Stockholm Convention on Persistent Organic Pollutants (POPs), to which Venezuela and 172 other countries are party, set guidelines for programmes to minimise, if not eliminate, POP sources.

But Venezuela is lagging so far behind in these matters that “of the 19,000 tonnes of waste produced daily, barely 10 to 20 percent is recycled: 85 to 90 percent of aluminium or iron, but only one percent of organic material, two percent of plastics and 20 percent of paper and cardboard,” Díaz said.

Improper management of solid wastes and residues has for years been at the top of the list of Venezuela’s worst environmental problems in the Vitalis reports, until it was displaced as the main problem in 2010 by lengthy drought and major flooding.

The drought and flooding brought about emergencies and interruptions of the supply of electricity and drinking water, and caused damages to roads and housing. Some 140,000 people were affected by the disasters, leading to street protests and social crises.

This was climate change’s debut, as it were, in Venezuelan society, and the ARA researchers expressed concern over the forecast that in spite of the unusually heavy rains in recent months, the country must prepare itself for a reduction of up to 25 percent in average annual rainfall.

Added to this is the predicted increase of 30 to 80 million tonnes per year in greenhouse gas emissions, if existing energy plans are implemented.

The state oil industry intends to raise crude production from the present level of 3.2 million barrels a day, according to official figures, to 5.8 million barrels a day in the second half of the decade. The government also plans to add a further 8,000 megawatts of thermally-generated electricity, using fossil fuels, to the current nominal capacity of 21,000 megawatts.

Pollution is also affecting river basins and other water sources. Only 350 sources of industrial effluents (14 percent) possess treatment systems, in a country that consumes 4,500 barrels a day of lubricants and greases, and where only 32 percent of sewage is treated in any way at all.

María Eugenia Gil, of the Aguaclara Foundation which works in environmental education, has denounced there are probably 3,000 open air dumps where municipal, industrial and hospital waste are mingled.

The ARA researchers found 46 sites contaminated with different substances, including polychlorinated biphenyls (PCBs) produced by the energy and metallurgical industries.

Particularly problematic is the case of mercury contamination caused by indiscriminate gold prospecting in southern Venezuelan river basins, which are the water source and reserves of the state hydroelectric power stations that provide 70 percent of the country’s electricity.

Environmentalists estimate some 12 tonnes of mercury a year are released into the environment in this way, and mercury has been found in fish from 13 out of 18 prized commercial species in southern Venezuela.

“Environmental issues can no longer be seen as the hobby of some nature-loving bird watchers; they are a strategic priority for the development of the country,” said Álvarez.