HAITI: Behind the Closed Doors of Port-au-Prince “Reconstruction”

PORT-AU-PRINCE, Jun 14 2011 - Almost 17 months after the Jan. 12, 2010, earthquake that devastated Port-au-Prince and three other cities, reconstruction of the capital’s downtown appears stalled, and over 800,000 people still live in tents – some 30,000 of them right across from the collapsed National Palace. 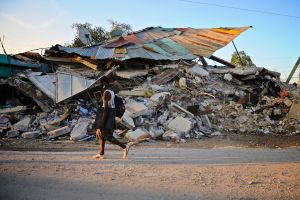 Tens of thousands of dollars have been spent on meetings to rebuild Haiti. But so far, there is no single plan - nor even a shared vision. Credit: newbeatphoto/creative commons

Can the slow pace of rebuilding, and of relocating refugees, be blamed on the lack of funding, as some would have it? Or on foreign humanitarian agencies not keeping promises? Are the United Nations or Haitian authorities at fault?

A two-month investigation by the Haiti Grassroots Watch (HGW) partnership, along with students from the Journalism Laboratory at the State University of Haiti, into these questions revealed a tangle of problems, including lack of coordination, rivalry and sometimes outright disagreement.

Added to the mix is the fact that no single authority seems to have a complete picture, or to accept complete responsibility, and the process has very little transparency.

While the heroes look on

As ministers, mayors, architects and agencies argue and promote different plans at invitation- only events in the capital’s swank hotels, Port-au- Prince continues its downward spiral.

The rains wash plastic bottles, animal carcasses, plant waste, wood and charcoal, feces, rubble, and just about anything else one can imagine through potholed streets and into ravines which dump right into the bay. Every other store is closed. Some have been repaired by their owners. Others razed. But there is little rebuilding, since nobody knows what plan will be followed.

Most residents, small business owners, refugees and street vendors have not been included in the competing planning sessions, which are taking place mostly behind closed doors. A recent meeting hosted by the Port-au-Prince mayor’s office was a "Who’s Who" of Haiti’s elite, with representatives of the families who have controlled the country economically for the past century.

Maggy Duchatelier Gaston has been living and working on Rue de la Reunion for over 25 years. The aging baker has already put 5,000 dollars of her own money into repairing Princess Bakery, Bar and Cooking School.

"No authority has ever come here. Nobody," Gaston said, even though the bakery is in the "public interest" zone.

Gaston put a few pastries in a box to be delivered. One of the few sales of the day. The giant display case was mostly empty, with only one sliced cake. She opened three months ago but business has been terrible. Major businesses, and the tax office across the street, have not been rebuilt, so there is very little foot traffic.

The baker has never heard of the "SOS Downtown" group of powerful property- owners and merchants, nor has she ever been invited to any meetings with anyone.

"I have never heard anything about what’s planned. We’ll probably die before anything is done," she said.

Gaston hasn't given up. The lone cake attests to that. But one cake does not a bakery make. And a few lots cleared of rubble is not reconstruction.


Harold Joseph, father of six, lives in a makeshift shack on the “Champ de Mars”, an area of parks and squares near the presidential palace and ministries. Joseph remembers that he and his family were promised assistance many months back.

“Agents came to take our names and promised some kind of aid, but we’re not sure which kind,” Joseph said.

So far the only help has been drinking water and 172 blue plastic toilets (that’s one for every 174 people) that most people don’t bother using. (Instead, they use plastic bags or Styrofoam “take-out” food plates which they then throw into overflowing trash cans.)

Joseph’s shack, and those of his neighbours, sits in the shadows of towering statues of the country’s “founding fathers” like Henri Christophe, Alexandre Pétion and Jean-Jacques Dessalines.

For 17 months these refugees – about 6,000 families, according to the most recent count – have done it all under the watchful eyes of their country’s heroes: eat, groom one another, play dominoes, relieve themselves and sell everything and anything, from the tiniest crackers to their dignity.

“They have forgotten us. Nobody cares about us. These people and these organisations are just bluffers and opportunists,” Joseph said, slouched dissolutely on a bench.

But email and meeting records turned up by HGW, and subsequent interviews, confirmed that only a few months after the earthquake, authorities were working on a plan to relocate all of the Champ de Mars refugees.

President René Préval himself hosted meetings where national and international decision-makers worked up a plan to move people back to their old neighbourhoods, like Fort National, on the hill above the Champ de Mars. Refugees would be provided with temporary shelters, jobs, and funding to clear the rubble and rebuild earthquake-proof housing.

Emails and “Tweets” from a Red Cross official from May, 2010, spoke of “small steps to a general solution” and of the “pilot” that would garner “high media attention”.

But the pilot programme was stopped in its tracks. And for the next 12 months, Champ de Mars residents have heard nothing.

“It was President Préval’s initiative,” he said, and all the agencies were enthusiastic about the success of the pilot project, since “the only solution is to allow people to return to their neighbourhoods.”

The project was most likely halted because the government decided instead to build a large “social housing” project in Fort National, on the hill above the Champ de Mars.

“I don’t have all the information but in fact… according to what I understand, the decision was taken to do a big operation at Fort National,” Adrian remembered.

According to the outgoing Minister of Finance and Economy, interviewed last month, the “big operation” is moving forward but is not yet at the execution stage.

“Part of the money is ready, the plans are done… the models have already been built. We just need to clear the sites so we can begin the building,” Ronald Baudin told HGW.

But that project has never been launched either. And another government authority – the Interim Haiti Reconstruction Commission’s housing advisor Priscilla Phelps – noted last January that the project hadn’t yet been approved, saying it needed to be “vetted” and that it was “pretty expensive”.

In the meantime, there are 18 humanitarian organisations working on the “shelter” issue in Port-au-Prince, building “Transitional Shelters” (wooden or plastic-sided shacks) and doing some house reparations. None is working with the Champ de Mars refugees.

HGW and university students found a similar situation when they looked into the slow pace of rebuilding the Port-au-Prince downtown area.

If Haiti’s capital could be rebuilt from documents alone, reconstruction would be well underway already. Powerpoints, PDFs and reports with beautiful schematics and discussions of “social mixing”, “urban villages” and a “shared vision” circulate on the Internet and are piled high on desks and tables.

Tens of thousands of dollars have been spent on conferences and meetings in Haiti and abroad. But so far, there is no single plan nor – it appears – even a shared vision.

Last summer, Finance Minister Baudin announced that, without putting a contract out to bid, the government had invited the Prince’s Foundation for the Built Environment – known as the Prince Charles Foundation – to submit a plan for the downtown area.

“We chose the foundation because it is not-for-profit,” Baudin told HGW. “We said – ‘Let’s make a choice where we don’t have to do a bid process.'”

According to Baudin, the market rate for the Foundation proposal could have cost nearly one million dollars. The Haitian government paid the foundation 295,000 dollars.

But several months ago, Port-au-Prince Mayor Muscadin Jean-Yves Jason cut off discussions with the Foundation. Jason wants Port-au-Prince to be planned by Haitians, and has “hired” (on a pro bono basis, according to the mayor) a Haitian firm to come up with a plan.

In the meantime, the Ministry of Planning and External Cooperation is also working with an urban planner: Canadian firm Daniel Arbour and Associates (DAA).

Like the Foundation, DAA is paid using Haitian government funds. An official at the Ministry of Planning – who asked not to be identified by name because he had not been given permission to speak – said he did not know if DAA was chosen via a bidding process, nor did he know the total amount of the contracts for what he called “strategic planning” and “spatial orientation”.

Asked if the rumored two-million-dollar figure circulating in the hallways of competing planning firms was close, he only said: “The cost might be less or it might be more than two million.”

Despite numerous telephone calls and emails, Finance Minister Baudin did not respond to requests for clarification on whether or not the DAA contracts were put out to bid, and/or if the work represents a duplication of the Prince Charles Foundation’s efforts.

DAA’s Quebec office referred all inquiries to a DAA representative in Haiti at the time this article was written, but he did not respond to the several emails.

Port-au-Prince Mayor Jason said he was aware of the DAA project but “nobody from the Ministry of the company has contacted City Hall.”

“I am open to all discussions,” Jason continued, “but there is a game being played to weaken the mayor’s office which wants to play the dominant role it is supposed to in the city.”

There are likely other reasons for the competing plans and jockeying for control – most notably the question of who will get the eventual contracts.

“We shouldn’t hide this – reconstruction is first and foremost a question of money and investments. A lot of money,” Jason admitted.

*To read both investigations, and to see photos and charts, visit http://wwwhaitigrassrootswatch.org

Haiti Grassroots Watch is a partnership of AlterPresse, the Society for the Animation of Social Communication (SAKS), the Network of Women Community Radio Broadcasters (REFRAKA) and the community radios of the Association of Haitian Community Media (AMEKA).