INDIA: Despite Fears of a Bubble, Microfinance Needed for Growth

BHUBANESWAR, India, Jun 10 2011 (IPS) - Sambari Naik never went to school and is determined to give her daughter Rebati an education. But 13-year-old Rebati seldom did well in her studies, often dozing over her books beside a flickering and smoky kerosene wick lamp in their house, which had no electricity. 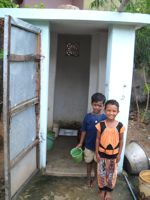 Toilet-trained kids use a microfinanced facility in their backyard in a Bhubaneswar slum. Credit: Manipadma Jena/IPS.

Things changed, however, when 45-year-old Sambari brought home a solar lamp system on a 900- rupee (20-dollar) microfinance scheme from Bharat Integrated Social Welfare Agency (BISWA), a non- profit organisation working in 18 Indian states and headquartered in the eastern state of Orissa, which has some of India’s lowest socio-economic indicators.

Rebati is now doing well in school, while Sambari and her husband Khedu work at the brick kiln near their village of Ankhadihi in Orissa’s Sambalpur province. The couple earned 140 rupees (three dollars) laying up to 800 bricks a day. But most days now they earn more, putting in extra hours after sundown by the light of the solar lantern.

Best of all, the Naiks save about 200 rupees (5 dollars) a month since they no longer have to buy the six to eight litres of kerosene they needed to light wood stoves and wick lamps. This amount now repays the monthly instalment for Sambari’s loan from BISWA.

“This new lantern lights up all corners of our one-room hut during storm and rain, and does not go off like the kerosene lamp. We go out into the dark to answer the call of nature without fear of snakes,” says Khedu Naik.

The Naiks belong to a Self-Help Group (SGH) in Sambalpur that has received assistance from BISWA, which partnered with the Delhi-based The Energy and Resources Institute (TERI) to provide renewable energy sources for the poor through microfinance. The partnership intends to cover more villages in the neighbouring underdeveloped states of Chhattisgarh and Jharkhand.

BISWA started out in 1994 as a non-profit extending microcredit to poor people, mostly women, to grow their income through small enterprises. But its subsequent strategy was to converge what it now terms social finance with social development initiatives.

The thousands like Sambari who are linked to women collectives affiliated with banks or SGHs have benefited from BISWA. Social finance now ensures their daughters’ higher education, and allows them to combat malaria through health loans and to access safe drinking water and sanitation facilities.

Orissa’s capital Bhubaneswar is one of the fastest-growing cities in eastern India. While converting its 2,000-year-old heritage zone into a global tourist destination, the local government sought to rid the city of the common practice of defecating in the open.

Among others, BISWA put its microcredit strategy to work. At the 87-household Gyana Nagar slum in the heart of Bhubaneswar’s heritage area, 24 women from four SHGs got loans ranging from 8,000 to 17,000 rupees (180 to 380 dollars) in 2008 to rebuild old or construct new toilets with baths.

“Though the loan is taken by the women, understanding its importance, the family pitches in to repay,” says borrower Mini Behera. Many women like Sambari Naik and Mini Behera say the benefits from these loans have brought them a stronger voice in family decisions.

BISWA’s financial services strengthen the ability of the poor to achieve the Millennium Development Goals – a series of anti-poverty and development targets adopted by the world’s governments in 2000, with a 2015 deadline – on their own terms in a sustainable way, says BISWA founder and chairman Khirod Chandra Malick.

The non-profit works with around a million rural women in India, and the number of those benefiting from its microfinance programme is growing.

“Microfinance is a critical anti-poverty tool. When the poorest (traditionally considered non-bankable), especially women, receive credit, they become economic actors and are empowered, to improve not only their own lives but also the lives of their families, their communities, and their nations. Microfinance can help make India’s economic growth more inclusive,” adds Malick.

BISWA works with various organisations, corporate entities and relevant government agencies, taking as much as six months to motivate and build capacities after which it lends amounts between 5,000 to 20,000 rupees (110 to 445 dollars) through bank-linked SHGs.

The repayment structure is on an easier monthly basis – not weekly as with many lenders – on diminishing balance with interest rates at 24 percent, up from 19 percent in March 2011.

Malick says integrating BISWA’s activities with microfinance brings many a challenge. “Structuring innovative yet feasible projects and motivating the poor to take ownership of these; maintaining the pace by striking a balance between expansion and sustainability of microfinance projects and mobilising funds for these are some of the major ones.”

The glut of investments in the microfinance sector over the last several years and the scramble among the poor to take, in many cases, multiple loans at a quarter of the 100 percent annual interest rate that local Shylocks had been charging, has raised fears that the sector could be feeding a bubble.

Triggered by a spate of loanee suicides, more regulations coming from the Reserve Bank of India are expected to bring down interest rates and reduce aggressive lending and collection practices, potentially squeezing out smaller players. The industry is thus expected to become more transparent and accountable.

With a potential base of 120 million unbanked homes, the demand for microfinance in India is likely to rise. But the challenge is retaining the social focus, as BISWA is trying to do, and serving as the last-mile bridge to the low-income population excluded from the traditional financial services.