Mauritania Could Lose Its Capital City to the Sea

NOUAKCHOTT, Jun 27 2011 (IPS) - For the past five years, water has been seeping out of the ground beneath parts of Nouakchott, undermining foundations and transforming some areas of the Mauritanian capital into uninhabitable marshes. 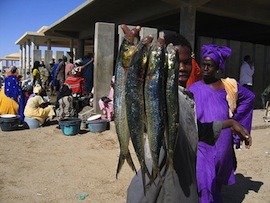 Tabara Gaye, a widow living in the Socogim PS neighbourhood of this coastal city, told IPS that her neighbours’ house collapsed on Jun. 20. She is demanding urgent help from the government before this year’s rainy season to pay for pumps and the cost of building embankments against the rising waters.

In 2007, limited flooding was observed in several places during the rainy season. But in January 2011, residents were forced to flee their homes when water began invading several neighbourhoods, including Socogim, Bagdad, Sebkha and Las Palmas. Murmurs of discontent gained strength until the clamour for compensation from the government and private developers who laid out the now-flooded sites spurred the government to act.

Mauritanian president Mohamed Abdelaziz personally visited the sites in April and set up an inter-ministerial committee to look into the problem, but the committee is yet to report back.

Retiree Moktar Kane, a victim of the flooding, says, “I spent 35 millions ouguiyas (around 138,000 dollars), to purchase a flood-prone plot. My neighbours and I, a total of 476 families, need a drain to drain waste water and runoff… or we want substantial compensation.”

Compensation for Kane and his neighbours is out of the question, according to the developers, Iskan (the name means housing in Arabic). “The lots were allocated in 1982, and the water table then was at two metres,” says Iskan’s technical director, Med Ali. “All of Nouakchott finds itself below the water table. Only the government can settle this.”

Recent studies by the government suggest that nearly 80 percent of the overall surface area of Nouakchott could be submerged in less than a decade – in 20 years at most. One scenario predicts the disappearance of the city by around 2050.

The director of environmental services, Ould Lefdal, explains it simply, “Nouakchott is located in a depression 50 centimetres below sea level. The sea is advancing towards the city at a rate of 25 metres per year.”

Banimou Tlayor, from the local non-governmental organisation Action for Rational Management of the Environment, says that the city’s port has changed the shape of the coast and that any rise in sea levels exposes Nouakchott to flooding.

In addition, the pumping of water from the Senegal River, a rise in the water table corresponding to rising sea levels in the Atlantic, and the absence of proper drainage are all playing a role.

Bamody Diakité, the coordinator of Nouakchott’s Special Programme to Safeguard the City, says that 120,000 cubic metres of water from the river is treated for the city’s fresh water supply, but a large part of this is lost to leaks in the antiquated pipe network. He says this, alongside the absence of a system of sewers and storm drains, is aggravating the phenomenon of the waters rising beneath the city.

The other contributing factor comes from the use of beach sand for construction, which – according to Diakité – has opened up 18 breaches in the coastal dune that protects inland areas from high seas.

The government has spent eight million dollars on the programme, the money going towards restoring the coastal dune as well as planting a green belt of protective vegetation.

Several studies have been carried out to assess how best to plug the gaps in the coastal dune. “The most feasible project – dredging the sea floor to reinforce the dune – will soon be put out to tender,” says Diakité. He also acknowledged the serious deterioration of the natural environment near the Port of Nouakchott where 15 kilometres of the coastal bar has been destroyed by wind erosion; a Chinese firm is building a protective dike.

But Dr Marico Demba, head of the U.N.-financed Adaptation to Climate and Coastal Change Project in West Africa, fears that responding to the changes will call for resources greater than Mauritania possesses.

The situation – its gravity realised very late – is precarious. Residents of Nouakchott fear for the future of their capital. Everything depends on the evolution of the climate and the warming of the planet, says Lefdal.