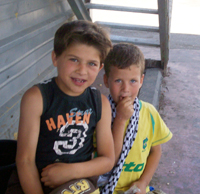 Children from the village of Nabi Saleh who were injured by teargas canisters used by Israeli security forces to disperse a non-violent protest. Credit: Mel Frykberg/IPS

Last month Ahmed was pulled out of his bed at 4am by Israeli security forces led by Shin Bet agents from Israel’s domestic intelligence agency. He was taken to the Russian Compound police station in West Jerusalem where he was accused of throwing stones at Israeli soldiers and police during clashes with Palestinian youth in the volatile neighbourhood of Silwan in East Jerusalem.

Silwan has become a regular point of friction and violent confrontation between illegal Israeli settlers, the Israeli soldiers and police who protect them, and Palestinian youngsters.

When the soldiers first arrived Ahmed’s father Daoud at first refused to open the door and demanded that the police produce a search or arrest warrant.

“But they threatened to break the door down if I didn’t open it. They asked me where Ahmed was and I asked them why they wanted him. They told me to shut up and assaulted me,” Daoud told IPS.

“They then went to Ahmed’s bedroom and dragged him out and into a police vehicle outside. They would not tell me where they were taking him and physically prevented me from accompanying Ahmed.

“The next morning after many frantic telephone enquiries I found out Ahmed was being held at the Russian Compound. When I went there they wouldn’t let me see my son and denied he was even there. Eventually after I called my lawyer I was able to see him several hours later. He looked very traumatised and was crying,” recalls Daoud.

“I was scared. I couldn’t see where we were going and my hands were handcuffed very tightly behind my back. At the police station they refused to give me water when I told them I was thirsty and when I asked to go to the toilet they kicked me. They questioned me for hours and accused me of throwing stones which I denied,” Ahmed told IPS.

Two weeks ago Ahmed’s cousin, Ali Siyam, 7, was arrested under similar circumstances and also accused of stone throwing. When his father Muhammad tried to stop the dozens of Israeli security men from dragging his son away, he was beaten with the backs of guns on his head and subsequently required hospital treatment.

Ali’s aunt was shot in the leg with a rubber-coated steel bullet when she tried to intervene and she too required hospital treatment. Ali’s parents were forbidden from accompanying their son to the police station and when they went to the Russian Compound the police denied that Ali was in their custody.

When Ali’s Israeli lawyer Lea Tzemel tried to visit her young client in jail the security guards refused to allow her in. When she tried to walk past the guards she was detained. Following an argument she was granted access to the boy. Ali was released several hours later.

Meanwhile, Ahmed was initially ordered to a month’s house arrest and forbidden from attending school as the police investigation continued. He is due to appear in court next month on charges of stone throwing. Whether he is guilty or not remains questionable as does Israel’s interrogation techniques of young Palestinian children.

“Fifty percent of the children were interrogated without their parents or a lawyer present and many were threatened and assaulted,” Gerard Horton, a lawyer from DCI, told IPS.

“Many of the children were screamed at, slapped and shoved, sometimes kicked and punched, during questioning and coerced into making statements of disputable accuracy. Some were threatened with further violence,” said Horton.

“These kids had been taken from their homes in the middle of the night, many handcuffed and blindfolded,” Horton said. “They were then interrogated hours later and by this time they were traumatised and disoriented, and not able to withstand the pressure.”

The situation of Palestinian children in the West Bank is even worse where they are subject to military law. Minors can be held for up to eight days before they are brought before a military judge.

“We had one case where three kids were tasered while their hands were tied behind their backs by Israeli police during questioning on one of the settlements. Others were threatened with having their homes blown up, and several threatened with rape,” Horton told IPS.

More than 25 Palestinian children have been arrested in Silwan during the last few weeks.

Milad Ayyash, 17, was shot dead in May by an Israeli settler security guard who claimed the boy had been involved in clashes.

Last year a video showing an Israeli settler from Silwan deliberately veering towards, and driving into a young Palestinian boy, who was allegedly throwing stones, caused outrage when an Israeli motor company used the video in an advertisement to promote the car’s endurance. The boy was hospitalised for fractures and subsequently arrested. No charges were brought against the driver.