Q&A: “When They Find Out You’re a Lesbian They Refuse to Help”

CAPE TOWN , Jun 16 2011 (IPS) - With homophobia on the rise, large numbers of South African lesbians are being subjected to discrimination and violent assaults. There has also been an increase in “corrective rape” by men trying to “cure” them of their sexual orientation. More than 30 lesbians have been killed since 2006. But most of these crimes go unrecognised by the state and unpunished by the legal system. 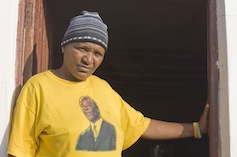 “Corrective rape” only gained national prominence in April 2008, when Eudy Simelane, former star of South Africa’s national women’s football league, who lived openly as a lesbian, was gang-raped and brutally beaten before being stabbed 25 times in the face, chest and legs.

But many other lesbians have been deliberately targeted for rape. Gay rights organisation Triangle says it deals with ten new cases of “corrective rape” a week. To raise awareness about gay rights, especially in South Africa’s townships, Funeka Soldaat founded advocacy organisation FreeGender in 2008.

Q: Why did you decide to found FreeGender? A: The first lesbian to be killed in (South Africa’s third biggest township) Khayelitsha was in 2001. Nobody cared about it. The next one was killed in 2006. Another hate crime. We were trying to mobilise people, but lesbians were too scared to attend public demonstrations. So I tried to find a different way to mobilise to pressurise government to give attention to homophobic crimes. We created a forum, FreeGender, to stand against homophobia as a group.

Q: What are FreeGender’s objectives? A: Our strategy is to address homophobia within our communities, with special focus on educating the police. We host workshops and public events, work with the local radio station, create awareness. We also want to ensure that criminal cases are handled correctly by the police.

Q: Homophobia is on the rise in South Africa, as on the continent. What prejudices are you faced with? A: In African society people still believe women need permission from men when making decisions about their lives. It starts from the way you dress. If you don’t fit men’s expectations you have a problem. You’re called rebellious. We need to get to a place where people respect women’s decisions. It’s basically a question of gender.

Q: South Africa’s Constitution is meant to secure the rights of all people. Do you feel protected by state and police? A: The police should be the intermediary between the Constitution and the people, but they are prejudiced themselves. They discriminate us. There is verbal abuse, in some cases even physical abuse. When they find out you’re a lesbian they refuse to help. It’s a big problem, because the police are the entrance to the justice system.

Q: The latest corrective rape victim was a 13-year-old girl, this May. The justice department said it condemns the act. Is that good enough? A: We’ve been fighting for many years for government to publicly say that homophobia is not ok. They have only done it now. So many people had to die first. Now that they have officially condemned homophobia, we are waiting to hear what they are planning to do about it. Something more has to happen. Our hope is that there will be consistence in the message against homophobia. We rely on there being a change in people’s attitude, because the police is not around 24 hours to protect you.

Q: The commission agreed in March to establish a task team to work on your demands. Has there been any progress? A: We’re still in the process of forming the task team. On June 15, we will meet with members of the justice department to discuss it. Progress has been slow. We will also meet with the police ministry that day.

Q: Few cases of homophobic violence result in trials. Have any ended in convictions? A: In 2001 a young lesbian was raped by her cousin in Cape Town. He received a jail sentence of eight years. But since then we’ve not seen justice. Other cases (where lesbians have been raped and murdered) have been in court for years, without resolution. In the meantime, the accused are out free, on bail. We have to make sure that perpetrators are brought to justice so that people know that there are consequences to those crimes.

Q: How does homophobia affect your day-to-day life? A: You can’t even go to the shop without someone calling you names. When I have to go to an area where people don’t know me, I become nervous. Sometimes they throw stones at you. Sometimes they hit you. At night, I don’t go out at all. At 7pm I’m home. I don’t take that chance.