FREETOWN, Jun 6 2011 (IPS) - Samuel Weekes remembers when the hills stretching out beyond the heart of Freetown were green. 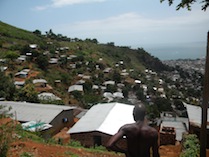 “Fifteen, 20 years ago, those hills were covered in trees. Today, most those trees have been cut down, mostly for housing purposes,” says Weekes, the director of population studies at Fourah Bay College in Sierra Leone’s capital city.

Freetown is wedged between the Atlantic Ocean and steep hills leading inland. On the hills around the city, homes cling to steep slopes, some held together by “packings” – as the locals refer to the makeshift terracing. There are no roads here, only steep paths held together with stones. In some areas, residents have to literally scramble up to the next level of terrace.

In a community near the university, two infants were killed when a boulder came loose from the slope above and crashed through their house last year. But resident Ibrahim Conteh says they don’t know of any building codes they should follow to erect their homes safely.

“Heavy rain can come and just pass through the house and cause accidents to happen,” he says, standing near a three-metre drop to the roof of a house below. “We try our best to make sure we put in place things to try make sure no bad things happen.”

“People find it difficult to find a place to live, so they come here.”

When they want to build, says Thaimu Turay, they clear off the trees, break the stone and make packings. “No one tells us how or where to put our structures,” he says. Weekes says government needs to plan carefully and enforce existing regulations limiting the amount of building that can happen on hillsides.

“How much of that is being done, I don’t know,” he says. “Government has to be very proactive to set limits beyond which they should not go and those limits have to be closely monitored.”

Yet as the city’s population balloons to well over a million people – exact figures are not known – space is becoming ever harder to find. More and more people are clearing to make way for homes – some grand mansions, others no more than a few sheets of tin pieced together – raising fears of landslides and other calamities as development spreads unchecked up the mountainsides. Those fears are fresh on people’s minds now as the rainy season’s daily deluges begin.

Weekes attributes the burgeoning crisis to unbridled population growth and rural-urban migration, as thousands flock to the city in hopes of better opportunities. Part of that is due to what Weekes calls “skewed development.”

“There’s a vast difference between Freetown and other urban and rural areas,” says Weekes, sitting in his office at West Africa’s oldest Western-style university. “If you can improve development in other urban areas and in rural areas, you might be able to relieve some of the stress on Freetown.”

Dr Kolleh Bangura, the director of Sierra Leone’s Environment Protection Agency, says the growing population is forcing people to build on the hills, with little regard to building regulations.

There are zones where construction is banned, but “there is no respect for these green belt areas,” says Bangura.

He says it’s difficult to control the building, despite the dangers it poses, citing the “politicisation” of the issue and the brutal murder several years ago of a lands official who went to demolish illegal structures on a hillside.

The government puts little pressure on those carving up the hills now, says Bangura, who warns laws must be revisited and resources expanded to deal with the growing population.

Experts warn that if growth continues at its current rate, “serious problems” will beset this city, not just with loss of forest cover, but sanitation, water and electricity supply and other infrastructure, which is already hugely lacking.

Freetown is far from alone when it comes to the scramble to find space for ever-burgeoning populations on inhospitable terrain. From Pakistan to the United States to the Philippines, people are settling on steep ground, with sometimes devastating consequences.

Weekes attributes the burgeoning crisis to unbridled population growth and rural-urban migration, as thousands flock to the city in hopes of better opportunities. Part of that is due to what he calls “skewed development.”

“There’s a vast difference between Freetown and other urban and rural areas,” says Weekes, sitting in his office at West Africa’s oldest Western-style university. “If you can improve development in other urban areas and in rural areas, you might be able to relieve some of the stress on Freetown.”

Cyril Mattia, spokesperson for Freetown City Council, says Sierra Leone’s civil war, which ended in 2002, brought many people to the city. Some never left. The growing population, he says, is “destroying the very fabric of the municipality.”

Mattia says many of the structures carved out of the hillsides are not authorised.

He says the bulk of responsibility for planning and enforcement of the city lies with the national government, but the municipality works on “sensitisation” to encourage people to avoid unsafe areas.

“Most of the land has been encroached upon and they are very hard to remove because of political reasons,” says Mattia. “We have huge rainfall in this country and people are also playing with the soil.