RIO DE JANEIRO, Jul 12 2011 (IPS) - Local women’s voices have begun to be heard over a community radio station now broadcasting in Complexo do Alemao, a clump of favelas or shantytowns on the north side of this Brazilian city that were ruled until recently by armed drug gangs. 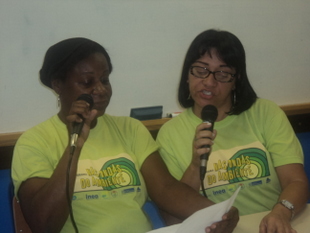 Gender issues, social and health matters, local environmental problems, employment and women’s rights are the focus of Radio Mulher, or women’s radio station, which began to broadcast this month.

Before going on the air, the participants received a year of training about the workings of a radio station, including general courses for all as well as specific training in different areas depending on each woman’s role in the station, as determined by each individual’s strengths and talents.

The new community radio station operators are aiming to “exorcise” difficult experiences that plague many girls and women in the favelas of Rio de Janeiro and other cities in Brazil. “What are our ghosts? Sexual abuse and rape,” Anatalia dos Santos, one of the first 28 women to receive the training, responds to IPS without hesitation.

The radio stations wants to tackle these and other thorny issues “that no one wants to talk about, like beatings from husbands, economic dependency on men, mothers who have to raise their children on their own,” she said.

“Women appear to be more resilient and combative, but they weren’t raised to get a job, to be successful, to make it on their own,” said dos Santos, who works as a nursing aide.

Because of this, she said, many women in Complexo do Alemao and other favelas are trapped by the reasoning that “better to live badly with him than worse off without him.”

Dos Santos belongs to Mulheres da Paz (Women of Peace), as do the rest of the women at the radio station, which broadcasts in the Complexo and surrounding areas on 98.7 FM.

Women of Peace, a Ministry of Justice programme, recruits community leaders to mediate in conflicts among local residents and try to create a peaceful haven in the favelas.

Anthropologist Solange Dacach, Women of Peace field coordinator in Rio de Janeiro and at the radio station, told IPS that one major focus of the initiative is working with young people in the favelas, because they are the chief victims of violence in Brazil.

“So many young people were being killed in drug-related turf wars,” she said.

That was the situation in the Complexo do Alemao, a complex of 13 favelas home to between 70,000 and 100,000 people, until November 2010, when the government of the state of Rio de Janeiro drove out the armed drug trafficking gangs that controlled the area, by means of a massive police and military incursion.

After regaining control over the favelas, the authorities established a permanent presence – which the government describes as a “social invasion” – with a focus on community policing and efforts to bring basic services like running water, sanitation and education to the poor neighbourhoods.

“No one wants to live surrounded by guns and seeing their kids left without any option but to pick up a gun,” dos Santos said.

Despite the ostentatious presence of an “army pacification force”, many residents of Complexo and other favelas in Rio de Janeiro where the authorities have regained control are afraid that the government will abandon them once again and the drug trafficking gangs will move back in and take reprisals.

The women involved in Radio Mulher realise that the cycle of violence cannot be broken overnight, and can only be combated by creating “a culture of peace.”

The community radio station is based on the concept of women as logical nurturers of that culture of peace, because of their mothering and caretaking roles, whether these are built-in or learned, said Dacach.

There are important precedents for this social leadership role taken on by women, said the anthropologist. “In Brazil there are a large number of movements of mothers: mothers of missing youngsters and children, of young people who were tortured by the (1964-1985) dictatorship,” which form part of the tradition of women involved in political and feminist struggles, community organising, soup kitchens and other initiatives.

Through the community radio station, the women in the Complexo want to make “peace” a tangible, day-to-day reality in the favelas.

With the support of other government and non-government institutions from the state of Rio de Janeiro, Radio Mulher aired its first programme, focused on the environment “as a whole,” on Jul. 2.

“Social questions are related to their environmental context, and because of this, the programme has a gender focus,” Rolemberg said, stressing that environmental issues are not limited to “plants or flowers.”

For these women, who come from poor, violent neighbourhoods, there is no shortage of issues to be addressed.

“Because of my life experience, I want to transmit to other women that they can’t be at the mercy of a pile of clothes,” Ivanir Toledo told IPS.

“They have to think of their family, yes, but also that their objective is to grow,” said Toledo, whose husband, head cook at a restaurant in a posh tourist area, is pleased with the changes he has seen in his wife.

“She’s more active and involved in her activities; she’s happier, and I am too,” Luiz Pereira de Sousa commented to IPS as he prepared a typical Brazilian dish with beef, rice and beans in the family’s home. “If we’re not close to our family, we as men don’t move forward either,” he added.

Toledo, who survived as a street child, homeless and on her own, wants the radio station to address an issue that still causes her pain: sexual violence.

Now happily married and the mother of a teenage daughter, Toledo, who is an active member of Women of Peace, has not forgotten that the streets are especially violent for girls.

“If you ask a man for a plate of food, you know the first thing that will pop into his mind. I started suffering violence as soon as I left home (at age nine). I’m talking about rape and abuse. And not just at the hands of one or two or three guys, but more. You’re there against your will, at that person’s mercy,” she said in a quiet voice.

Dos Santos, meanwhile, wants to discuss the question of work.

“In general, job training courses are especially focused on men, even though the highest levels of unemployment are among women, who in addition are often the heads of their families,” she said.

The radio station’s first programme dealt with an issue of special interest to the community: the launch of a campaign to prevent dengue fever and the reproduction of the Aedes aegypti mosquito, which spreads the disease. The radio station’s campaign has the support of the Health Ministry.

Structured as a friendly chat among neighbour women, the programme moved from issue to issue, ranging from advice on how to keep the neighbourhood free of garbage and standing water in which the mosquitoes breed to how to recognise the first symptoms of dengue fever.

Although the Women of Peace are the operators of the radio station, it will be open to all voices in the community, not only because that is its role as a community station, but also because it is their calling, they explained to IPS during one of the workshops in which they receive ongoing training.