GUATEMALA CITY, Jul 28 2011 (IPS) - “We were in prison for three days in Mexico,” Amarilis Rodríguez from Guatemala says between sobs. “When we crossed the border at Piedras Negras, in Tamaulipas, into the United States, we were chased by the ‘migra’ (border patrol agents). They caught me, but my brother escaped and I haven’t heard from him since.” 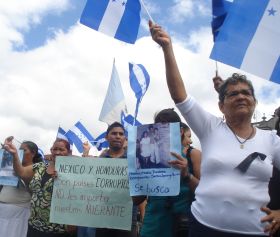 Juan Neftalí Rodríguez, Amarilis’s 23-year-old brother, went missing on Aug. 18, 2010 during his attempt to make it into the southwest U.S. state of Texas with hopes of a better life. His two children, ages one and seven, and his mother and siblings are anxiously hoping for news of him.

To search for her son Juanito and protest the danger and abuses faced by hundreds of thousands of Central American migrants as they journey northwards through Mexico on their way to the U.S. border, Manuela Bran set out Monday for Mexico along with more than 100 other relatives of missing migrants from El Salvador, Guatemala and Honduras, in the “Step by Step Towards Peace Caravan”.

“We have hopes that someone is holding him,” says Rodríguez, who saw her mother off Sunday in the Guatemalan capital. “They told us to be careful because in the bush there were many men who could catch us and take us away.”

The march to protest the abuses faced by migrants in Mexico, organised by some 20 human rights organisations and groups of families of missing migrants, is following the “migrant trail” that crosses Mexico from south to northeast, through the states of Chiapas, Oaxaca, Veracruz and Tamaulipas.

The expedition consists of two groups. One is made up of activists and the family members of Central American migrants, who set out by bus Monday from Guatemala City, crossed the border into Mexico and reached Ixtepec, in the state of Oaxaca Wednesday, after passing through Ciudad Hidalgo, Tapachula and Arriaga, in the state of Chiapas.

The second group, consisting of more than 100 migrants, human rights defenders and religious workers, is riding on top of the freight train known as “the beast” or the “train of death,” which thousands of undocumented Central Americans ride northwards every month.

The train set out Tuesday from Tenosique, in the southeastern state of Tabasco, on its way to Coatzacoalcos, a city in Veracruz where the two groups plan to meet up Friday Jul. 29.

Catholic priests Alejandro Solalinde, Luis Ángel Nieto and Heyman Vázquez and other renowned Mexican migrant rights activists are in the group on the train, along with Guatemalan consuls in Mexico Rogelio Cipriano Méndez and Juan Fernando Lantan.

“The trip has gone smoothly, without any incidents,” Father Tomás González, director of the migrant shelter in Tenosique, told IPS by cell-phone from the train, which he and the rest of the group boarded in Tenosique. “We haven’t asked for protection. Many people have climbed onto the train.”

“We are trying to help curb the wave of robberies, kidnappings and murders of migrants, get organised crime to stop filling their pockets through extortion and kidnapping,” adds the priest, a target of constant death threats from the criminal groups operating in and around Tenosique, whose freight railway is the most dangerous in southeast Mexico.

Every day, thousands of Central Americans cross the border into Mexico, where they face the risk of kidnapping, extortion, rape and murder by criminal organisations, which are often in cahoots with the security forces. And many of those who survive these dangers end up dying of thirst in the desert.

According to the National Human Rights Commission, 20,000 migrants were kidnapped in 2010.

The most recent kidnapping of a group of migrants took place in June in Veracruz, when at least 80 people, mainly Central Americans, went missing. Nothing has been heard from them since.

In Aug. 23, 2010, the bodies of 72 migrants were found on a ranch in Tamaulipas state. The massacre, which made headlines around the world, was blamed on Los Zetas, described as a “narco-terrorist” cartel, and highlighted the horrors faced by migrants travelling with nothing but a small backpack full of dreams.

The brutality has driven these two groups of human rights activists and the families of migrants to set out on the Step by Step Towards Peace Caravan. Along the way they have met with Mexican authorities and other social organisations, and have taken part in cultural and spiritual activities focused on migrant rights.

But the main activity is scheduled for Saturday Jul. 30, when they will meet with Felipe González, Inter-American Commission on Human Rights (IACHR) Rapporteur on the Rights of Migrant Workers and Their Families, in Tierra Blanca, Veracruz.

Amílcar Vásquez, with the Pastoral Commission of Human Mobility in Guatemala, a migrant rights group, told IPS that the caravan is aimed at getting the attention of the Mexican authorities, of the governments of Mexico’s Central American neighbours to the south, and of the rapporteur himself, to whom they will deliver a document with personal accounts from victims and their families and reports on crimes against migrants.

“We want to make the situation more visible and set forth recommendations on protection for migrants and the implementation of fair, comprehensive laws” to improve safety for Central American migrants in Mexico, she says.

Half of the 43 million people in Central America live in poverty, which is one of the main reasons driving hundreds of thousands of undocumented Central Americans to try to reach the United States in search of the “American dream” – which ends in success for some but in a nightmare for many others.

“I’m here because I haven’t heard anything about my son for 20 years,” María de los Altos Ávila, a 74-year-old Honduran woman who is travelling with the group from Guatemala in search of some news about her long-missing son, José Armando Salgado, told IPS.

“Mamá, I want to go because I want to make life better for you,” he told me before heading north, recalls Ávila, who stayed behind to take care of her son’s four children.

“I hope to God he’s safe and sound. That’s all I want,” says Ávila, holding up a poster that reads “God bless José Armando Salgado, I love you so much,” tears streaming down her cheeks.

According to human rights groups, some 1,500 Central Americans set out for the United States every day, but many are kidnapped or killed along the way.

The caravan will end its march in Mexico City on Monday Aug. 1, with a demonstration in the central Zócalo square and a meeting with a legislative committee. Meanwhile, Rodríguez, Bran, Ávila and thousands of other relatives of missing migrants will continue to pray and hope for news of their loved ones.

*With reporting by Emilio Godoy in Mexico.