THUNUKKAI, Sri Lanka, Jul 25 2011 (IPS) - If voters in this remote village, deep inside Sri Lanka’s former war zone, turned out in strength for the historical Jul. 23 local body elections, it had to do with the availability of buses to ferry them to the nearest polling station 20 km away. 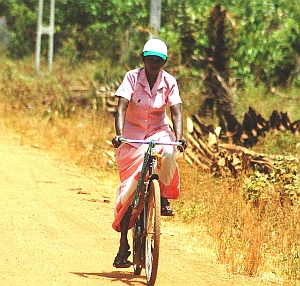 Lack of motorised transport in the Tamil-dominated North was a factor in the Jul. 23 local body polls. Credit: Amantha Perera/IPS

Election monitors feared that the villagers of Thunukkai would not take the trouble to travel 40 km to cast their votes, even if local body elections were being held after a gap of 25 years.

“It was a big concern, that people were going to be disenfranchised because there were no buses,” Keerthi Tennakoon, executive director of the national election monitoring body Campaign For Free and Fair Elections (CaFFE), told IPS.

CaFFE, other election monitoring bodies and political parties had raised the issue of transport with election commissioner Mahinda Deshapriya two days before the polls, but failed to get a commitment.

Funds were not the only issue. An offer from CaFFE to bear the costs of providing free transport in the former conflict zone, popularly known as the Vanni, and elsewhere was shot down by election officials.

Finally, some areas in the Tamil-dominated north were provided with buses, but not others.

According to Tennakoon, the effects of the availability of transport were clear in Thunukkai where over 65 percent of the 5,227 registered voters made it to the polling booth.

“The one big factor why so many voted – buses,” said Tennakoon one of the activists who had lobbied hard to ensure that transport was provided in the Vanni on election day. “They may have been without a vote for 25 years, but It was the provision of buses that did the job.”

Thunukkai villagers were allowed three buses to travel to and from the booth, situated on the A9 highway. The villagers had to pay a fare for the bus rides, but that was far better than riding 40 km on bicycles to exercise their franchise.

“Most people don’t have private means of transport other than bicycles, so almost all of us used the buses to get to the polling station,” Rathna Raja, a Thunukkai resident, told IPS.

The road that connects Thunukkai with the all important A9 highway is best described as a stretch of gravel and gaping potholes. It has not seen a lick of tar in almost 15 years and the chief means of transportation is the bicycle.

“It [the bicycle] is the most reliable means of transport here,” Chandradasa Chandaran, a villager, told IPS.

Chitra Kurukularaja, who lives in the Kilinochchi town area, said that on election day voters were seen using public transport, where available, to get to the booths.

“Transport is very unreliable here, especially on interior roads. More people came to vote where there were buses,” she said.

Villages where transport was an issue reported a low turnout. In the nearby Pachchilaipalli division only 46 percent of the 7,116 registered voters turned up to vote.

“Transport was a big problem there,” Tennakoon said, adding that wherever transport was available voting was up to expectations or better.

Saturday’s election was not the first held in the Vanni after the defeat of the separatist Liberation Tigers of Tamil Eelam (LTTE) by government forces in May 2009. The region had voted at the 2010 presidential and parliamentary elections.

However, Saturday’s poll covering 23 administrative divisions in the Vanni and Jaffna – out of the island-wide 65 – had added significance. It was considered as a test of approval for the Mahinda Rajapaksa government in the former war zone.

“The people of the north had the chance to signal their opinion on what is taking place in the north,” Soosaipillai Keethaponcalan, the head of the department of political science at the University of Colombo, told IPS.

The Vanni was devastated by the civil war and over 300,000 people were left homeless or displaced by it. They began returning to their villages or to live with host families by end 2009. By the end of June some 12,000 still remained in camps.

The government has launched rapid development work in some parts of the Vanni, especially along the A9 highway. It has repaved over 100 km of the highway that bisects the region and power lines have also been drawn in most areas.

Over 490 sq km have been de-mined and over 80 percent of the paddy land is back under cultivation in the Vanni, according to UN situation reports.

However, the overbearing presence of the military in the region and the lack of civil administration are, according to critics, signs that normalcy is yet to be achieved.

“The population in the north tends to give more importance to political issues than development,” Keethaponcalan told IPS.

That may well have been the case. Of the 23 administrative bodies up for election in the former conflict zone, the opposition Tamil National Alliance won 18 while another Tamil party won two.

That left Rajapaksa’s ruling United People’s Freedom Alliance (UPFA) with just three in the Tamil areas. Contrastingly, in the Sinhalese-dominated south all the 45 bodies contested were overwhelmingly won by the UPFA.

“It is a clear signal from the north that it is not in favour of what has been taking place,” Tennakoon said.

CaFFE said in a statement that “the dominant presence of the military and the lack of civil administration did not aid the transparency and accountability of the first post-war local authority election”.

But CaFFE’s head Tennakoon was quick to add that the conduct of the election, however flawed, was a signal that democracy was taking root in the region where, not so long ago, bullets rather than ballots ruled the day.