MEXICO CITY, Jul 26 2011 (IPS) - The murder of journalist Yolanda Ordaz, whose body was found Tuesday in the eastern Mexican city of Veracruz, once again threw into relief the dangers that reporters face in this country, which in the case of women are compounded by discriminatory and sexist treatment. 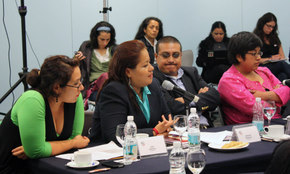 Ordaz, a reporter with Notiver, the leading newspaper in that region, went missing Sunday. Her corpse was found, with the throat cut, behind the offices of another newspaper. Her death brings to 14 the number of journalists killed in Mexico since 2010, and she is the third reporter murdered in the state of Veracruz in the last two months.

When she began to investigate the Jun. 20 murder of Notiver’s assistant director Miguel Ángel López, Ordaz received threats telling her she “would be next” if she did not drop the case. López was shot in his home along with his wife and son.

In her 2005 book “Los demonios del Edén” (The Demons of Eden), Cacho documented complicity between child sex rings and political and business elites in her hometown, the popular beach resort of Cancún.

Women journalists have increasingly become targets of death threats in Mexico, such as Ángeles Mariscal, who told a Senate public hearing on Jul. 20 that she was receiving threats as a result of her reporting work in the southern state of Chiapas.

The most serious case until Ordaz’s murder was that of María Esther Aguilar, who went missing on Nov. 11, 2009 after reporting on brutality and abuse of power by the police chief in the city of Zamora, in the southwestern state of Michoacán. The reporter had already received death threats from organised crime groups during her 10 years of work for different regional media outlets.

Aguilar became the first woman journalist to disappear in Mexico, where 13 reporters have disappeared, on top of the 14 who have been murdered. Since 2000, 71 journalists have been killed in this country, including Ordaz, and the United Nations considers Mexico the third-most dangerous nation in the world for reporters.

The case of women journalists also bring to light an aspect that has received little attention in reports on attacks against the press: the particular vulnerability faced by women journalists because of their gender.

“And it’s basically seen in two things: one has to do with the family, because the man is threatened directly while a woman is almost always told that they will hurt her family. The second is sexual violence and slander that ruins women’s reputations,” she said.

She also stressed that “women reporters always face double vulnerability, because companies are more likely to support men who have been threatened, either economically or with assistance to move to another city.”

That is due to “the belief that he is the head of the family, and that women are supported by their husbands and our incomes are secondary,” said the director of CIMAC, a non-governmental organisation that advocates women’s rights through communication.

That was the case of Karla Tinoco, the correspondent in the northeastern state of Durango for the regional daily La Opinión Milenio, who was fired after receiving threats from criminal groups, in May 2010.

The executives of Multimedios Laguna, which owns the regional newspaper and the national paper Milenio, and Tinoco’s own colleagues decided that her presence on the staff posed a danger to everyone.

“Women journalists are left on their own more easily by the media outlets they work for,” said Lagunes.

That also happened to Mariscal, a veteran reporter who was the Chiapas correspondent for the Mexico City daily La Jornada for 16 years. After she was harassed, slandered and put under surveillance by officials in the administration of state Governor Juan Sabines, the company did not renew her contract in 2011.

Mariscal and her husband, Isaín Mandujano, correspondent for the weekly Proceso newsmagazine, also published in the capital, have been constantly harassed by the state government, she told the Senate last week.

“We have received emails and messages in Twitter where I am attacked not for my work, but for personal things,” Mariscal told IPS, commenting on the sexist element in the attacks.

“They are offensive anonymous messages that say, for example, ‘do you know who Isaín is with?’, ‘why does he leave you all by yourself?’, or ‘he doesn’t love you’. And they send him messages that say ‘Ángeles is neurotic, how can you put up with her?’, and scornful insulting things about me, that have nothing to do with my work,” she said.

Organisations that defend freedom of expression estimate that between 13 and 20 percent of attacks on the press in Mexico target women reporters, but the statistics are not broken down by gender.

What has been proven is that a majority of threats and attacks on women journalists come from police and government authorities.

“The sexual connotations in the threats are elements that represent a double attack on women,” Lagunes said.

The new wave of death threats received by Lydia Cacho began with a Jun. 14 email sent to the foundation she heads, which is based in Spain. Three days later, she received a phone call in Mexico in which she was warned to “leave the former governor (Mario Marín) alone.”

In “The Demons of Eden”, Cacho exposed a child prostitution, pornography and trafficking ring that operated in Cancún, in the southwestern state of Quintana Roo, and was allegedly protected by powerful local politicians and businesspeople.

In December 2006 she was illegally detained for 24 hours on orders from Marín, who was then governor of the southwestern state of Puebla, in reprisal for her book.

Since she reported the latest threats, she has been the target of sexist slurs on social networking sites.

Carmen Aristegui, Mexico’s most popular female radio anchorwoman, was also the focus of sexist comments after she was fired in February for supposedly violating the code of ethics of her employer, the MVS Noticias station, by “broadcasting rumour as news.”

The reporter was sacked after she referred to allegations by opposition lawmakers that President Felipe Calderón has a drinking problem, and said the accusation was serious and merited a response from the government.

Hundreds of people held a protest rally in response to Aristegui’s dismissal, and she accused the government of censorship. Finally, after negotiations with the station, she was reinstated, in what her supporters saw as a victory for the public.

But her critics did not stop their sexist insults: “menopausal prostitute” she was called in Facebook.

“You need a good f**k”, “neurotic” and “hysterical” were among the frequent insults received by both Cacho and Aristegui, Mexico’s most famous women journalists.

“No one would say any of that about male reporters,” Lagunes said.

Luis Guillermo Hernández, a member of the Los Queremos Vivos collective, which organises protests against attacks on journalists, also told IPS there were “marked differences” in the treatment received by women in many professions, which he said forms part of “a social dynamic that we have been unable to successfully combat.”

He also said “I haven’t seen women journalists organising with a gender vision to defend cases like those of Lydia (Cacho) or Carmen (Aristegui),” and suggested that this was cause for reflection.

In a report published in June, the New York-based Committee to Protect Journalists (CPJ) interviewed 52 female and male journalists from around the world who have suffered sexual abuse, ranging from verbal sexual harassment and groping to rape.

“The Silencing Crime: Sexual Violence and Journalists”, produced by CPJ senior editor Lauren Wolfe with support from the International Women’s Media Foundation, stresses that reporters who are victims of sexual abuse usually keep it quiet, due to cultural and social stigmas and the fear of being reassigned or denied future assignments.