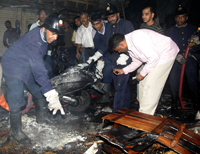 Aftermath of bombings at Zaveri Bazaar in south Mumbai. Credit: Courtesy of IBNS

Rushing out to check, he found dismembered and charred bodies strewn everywhere and people covered in blood screaming and running for their lives.

Sen, haunted by the November 2008 terror attack in Mumbai, knew his city was once again a target of terrorism.

“I got many of them in cabs to take them to the hospital. It was a scene I would never forget,” says Sen, a gift shop owner in Zaveri Bazaar, the hub of diamond trade in India’s financial heart of Mumbai.

“But I am angry. This is the third attack in this area and there is no regard for our security or lives as it happens again and again,” he says.

A day after three coordinated blasts tore through Mumbai, whose mostly migrant population tops 20.5 million, anger and hopelessness are overpowering grief and resilience.

“We are called resilient. But the famous Mumbai resilience is forced upon us. We are angry and helpless at the same time,” Jayesh Labdhi, a committee member of the Mumbai Diamond Merchants’ Association, told IPS.

“Life is cheap in Mumbai. I saw it myself yesterday,” says Labdhi. “People lying dead all over and running helplessly. We bring prosperity to Mumbai, but our own lives are valueless since it is happening again and again and the government fails each time.”

Prithviraj Chavan, chief minister of Maharashtra, the western Indian state of which Mumbai is the capital, says the city is targeted because it is the financial heart of India.

India’s Prime Minister Manmohan Singh said Thursday that the perpetrators of the attack would be brought to justice. Meanwhile the opposition blamed the ruling government for its policy failure in dealing with terrorists and security analysts expressed that India is woefully lacking in capacity to fight terror.

Ajai Sahni, a counter-terrorism expert with the New Delhi-based Institute for Conflict Management, said intelligence is of no use till India builds a nationwide capacity to fight terror.

“Even if you fortify Mumbai, there would be countless other Muffasil towns in India where the network will thrive and bombs will be assembled to take them to cities like Mumbai for blasts,” Sahni says.

“Since the 2008 November terror strikes in Mumbai, the city police have made arrests, especially in recent times Islamist terrorists were apprehended, but it cannot stop terror unless that capacity building is extended across the country,” Sahni explains. “You have to dismantle the terror network across India. Terror cannot be contained at the point of delivery.”

While India’s home minister P. Chidambaram said there was no intelligence failure in the case of the latest terror attacks in Mumbai, Sahni said intelligence networks have to be extended nationwide.

According to B. Raman, director of the Chennai-based Institute for Topical Studies and former chief of India’s intelligence agency’s research and analysis wing, any successful terror attack is an intelligence failure.

“These attacks are not matters of providing physical security. Here it is happening in a crowded public place,” Raman says, pointing out that Mumbai was attacked first in 1993, then in 2003, 2006, 2008 and now again in 2011. “While we blame Pakistan for it all, we have to bring concrete evidence of Pakistan’s involvement. Till that time we have to keep talking with Pakistan.”

According to Sahni, talks with Pakistan are meaningless for India’s security because they have got nothing to do with building internal capacity to fight terrorists.

“Pakistan is exporting terror to India since 1984 and there is no reason to believe that it will ever change its policy,” Sahni says.

“It is not a failure of intelligence, it is essentially a failure of policy,” Advani says. “The Government of India must shed its ambivalence toward terrorism and follow a zero tolerance policy,” he says, hinting at the Manmohan Singh-led central government’s decision to resume talks with Pakistan after they broke down over the 2008 Mumbai attack.

No terrorist group has claimed responsibility for the attacks of Wednesday.

While there is suspicion that a home grown group called the Indian Mujahideen (IM) – said to be a part of the Pakistan-based militant outfit Lashkar-e-Taiba (LeT) – is at fault, Indian authorities have not yet named any outfit.

“All are suspected. We are also interrogating some recently arrested members of IM, but there are no special leads yet,” said U. K. Bansal, internal security secretary under India’s Home Ministry.

LeT was blamed for the 2008 Mumbai terrorist attack in which 10 gunmen laid a three-day siege to a Jewish centre and two luxury hotels killing 166 people, including foreigners, and wounding more than 300.

While the politicians bicker and the blame game continues, Mumbai residents are livid.

“This is a repeat telecast of the past such attacks. The debate over intelligence failure is a sham and the word resilience is nothing but a cover for our impotency,” said Ashok Pandit, a filmmaker and social activist in a television debate here.