KARACHI, Jul 19 2011 (IPS) - Defence analysts in Pakistan believe that foregoing 800 million US dollars worth of aid may be a fair bargain for ridding this country of over a hundred ‘military trainers’ who were suspected of being spies. 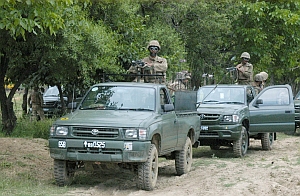 Pakistan’s army chief Gen. Ashfaq Parvez Kayani has said that his military can do without the suspended U.S. military aid worth 800 million dollars, but suggested that the funds be diverted to improving the country’s economy.

Relations between the allies in the war on terror in neighbouring Afghanistan soured after U.S. Navy Seals crossed over the border in helicopters and swooped down on Abbotabad to kill al-Qaeda chief Osama bin Laden in his hideout in the Pakistani cantonment town.

The U.S., which relied on its own intelligence network within Pakistan for the May 1 raid, also stepped up public denunciation of Pakistan’s army, accusing it of incompetence in tracking down bin Laden or, worse, complicity.

Coming under pressure from the U.S. military on the one hand and facing domestic anger at the Abbottabad raid on the other, the Pakistani army reacted by sending home more than a hundred U.S. military trainers.

“They were not all trainers and the army knew it,” says Ikram Sehgal, a well-known defence analyst. “Of every three or four trainers, one would be an undercover intelligence person trying to subvert the loyalties of our soldiers.”

Signs that the U.S. maintained a spy network within Pakistan became apparent after Raymond Davis, a U.S. official, shot dead two Pakistani men in Lahore on Jan. 27. Davis, who said the Pakistanis were trying to rob him at gunpoint, turned out to be an intelligence operative.

“It’s a good thing they were sent packing,” Sehgal said. “We were previously giving in to Washington’s every whim. Now we are finally speaking as equals and that is how any relationship should be based – on mutual respect,” he added.

Rahimullah Yusufzai, a senior journalist and an expert on Afghan war, said the U.S. trainers were infiltrating the armed forces and trying to establish their own intelligence network in Pakistan.

According to Yusufzai, the trainers were part of a package which included light arms and gadgets like night vision goggles which the army was “coerced and tempted” to accept.

“They are often private contractors, outsourced by the U.S. army,” said Sehgal, adding that the U.S. has more to lose by taking a high-handed stance as “major intelligence sharing may be stopped” by Pakistan.

Another reason why Washington is unhappy with its frontline ally is that its “do more” programme failed to enthuse the Pakistani military into launching an offensive against the powerful Afghan militant group led by Maulvi Jalaluddin Haqqani, known as the ‘Haqqani network’.

Frustrated by the lack of cooperation, the U.S. military has resorted to intensified drone attacks in North Waziristan in Pakistan, where the Haqqani network is based, causing indiscriminate death and destruction.

“Going after the Haqqani network is like putting your hand in an anthill,” said Sehgal, explaining the Pakistan army’s reluctance to launch an offensive. “These terrorist attacks taking place [in Pakistan] today will seem like a Sunday picnic.”

Sehgal offers three reasons for Pakistani inaction: “The Haqqani network has never carried out attacks on or in Pakistan; the army does not have resources needed to carry out an all out operation against the group and they must be well aware of the consequences of such an offensive.”

The army is also keen to win back the respect of Pakistan’s people. There is a growing feeling among its ranks that rising domestic criticism is a concerted campaign to vilify and weaken the army.

Along with domestic criticism, the U.S. is adding “to the barrage of propaganda” to build pressure from outside, says Hasan Askari Rizvi, a Lahore-based defence analyst. “Public denunciation of Pakistan has damaged the U.S. – Pakistan relations more than any other issue.”

How important is U.S. aid to Pakistan? “Pakistan can live without aid even now if there is no internal conflict and terrorism in Pakistan,” says Rizvi.

In the 1990s when the U.S. imposed sanctions on Pakistan, cutting all economic and military ties, the democratic governments of that time showed remarkable resilience in weathering the crisis.

As for normal bilateral relations between the U.S. and its frontline ally some observers believe that the elastic limit may soon be reached. “Unless some kind of a miracle happens, I think we shall reach the point of no return,” commented Pervez Hoodbhoy, an academic and a peace activist.

Hoodbhoy says Pakistan has brought the present situation upon itself and is now paying the price for it.

“I wish the facts were in our favour, but they are not,” Hoodbhoy said. “Bin Laden was in Pakistan, jehadi groups operate in full public view, and the Taliban are sheltered in Quetta.

“It is time we started worrying about how Pakistan violates the sovereignty of other countries rather than just see the violation of our own. We can lie to ourselves as much as we like, but the world can see for itself.”