LIMA, Jul 29 2011 (IPS) - The new president of Peru, retired lieutenant colonel Ollanta Humala, promised to make the fight against poverty and marginalisation the top priority of his administration. But his inaugural address was short on specifics, according to activists and analysts. 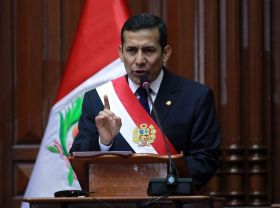 To the surprise of the rightwing opposition and other critics who expected him to announce nationalist or populist measures, Humala only spoke in his swearing-in ceremony Thursday about taking steps to make sure that Peru’s economic boom reaches the poor, especially in the country’s Andean highland and Amazon jungle regions.

“I will dedicate all my energies to laying the foundation for wiping out, once and for all, the painful face of exclusion and poverty, to build a Peru for everyone, and my constant focus will be on the most fragile of our brothers and sisters,” said Humala, who is described by analysts as centre-left or leftwing.

“Democracy in Peru will be complete…when equality is the patrimony of all and social exclusion has vanished, even in the most remote corners of the country. We want the phrase itself, ‘social exclusion’, to be wiped out forever from our language and our reality. I will assume that challenge with my words and my life,” he said in his inaugural speech.

But experts say the reduction of poverty by just three percentage points between 2009 and 2010 contrasts with the high rate of GDP growth, of 8.8 percent in 2010. They also note that poverty levels remain high in 14 of the 25 regions in this country of 28 million people.

The poverty rate is well above the national average in highlands areas like Huancavelica (66 percent), Apurimac (63 percent), Huánuco (58.5 percent) and Puno (56 percent). In other words, little to no progress was made in fighting poverty and extreme poverty in historically impoverished areas in the Andean and Amazon regions.

Humala, who staged a failed coup 11 years ago against imprisoned former president Alberto Fujimori (1990-2000), added that poverty is a form of discrimination, which explains the escalation of social protests around the country over the last few years.

“The disproportionate increase in social conflicts, many of which are absurdly violent, show us day after day that we must urgently address the injustices, correct our course and renew dialogue in our society,” he said.

According to the Ombudsperson’s Office, June was a particularly conflict-ridden month, with 217 protests and strikes, half of which ended in violence. Of that total, 118 involved social and environmental issues, and took place in Peru’s poorest regions.

Marco Arana, a Catholic priest who heads the GRUFIDES grassroots human rights and environmental movement, said that while Humala mentioned the problem of poverty, he failed to outline concrete measures to be taken to combat the phenomenon.

“The failure to say what policies would be followed with respect to the socio-environmental conflicts was a big lapse, since it is an extremely serious problem left by García,” he told IPS.

“Another gap in the president’s speech involves the question of prior consultation with indigenous communities with respect to the use of their territory,” added Arana, whose movement is an Oxfam partner.

“It is worrisome that he did not mention it, because a number of the conflicts were caused precisely by the fact that projects are carried out behind the backs of indigenous communities,” he said.

By law, native peoples must be consulted in advance on any development or industrial initiative that directly affects their territory, such as mining, logging and oil industry projects in Amazon jungle regions inhabited mainly by indigenous people.

The few concrete announcements made by Humala included an expansion of the anti-poverty programme “Juntos”, which is carried out in the country’s 800 poorest districts and includes a monthly cash transfer to extremely poor households, especially pregnant mothers and families with children under the age of five.

But Juntos, considered the “jewel” in the crown of the García administration’s social programmes, is facing serious problems of efficiency, according to a new report by the comptroller-general’s office.

The report, which IPS saw, says the Juntos programme, which had a total budget of 502 million dollars from 2006 to 2008, “did not establish a baseline that would make it possible to gauge its impact on the beneficiary population, which encompassed 420,000 families” in 2008.

According to critics of how Juntos has been implemented, that would explain why 21,818 extremely poor families did not receive the cash transfers to which they were entitled over the last four years. That money, which totals 5.7 million dollars, “may have been used for a purpose other than the one to which it was assigned in the Juntos programme,” the comptroller-general’s office said.

Although during his campaign, Humala said his government would adopt a windfall tax on mining companies, to help finance social programmes and put the economy on an even more solid footing, he did not mention the issue in his inaugural address.

“While he did say the prime minister would be in charge of developing each of the different proposals, he could have specifically mentioned the issue of the mining industry windfall tax, because expectations were high,” Julia Cuadros, the expert on mining questions at CooperAcción, a local social development organisation, told IPS.

“We suppose that when the prime minister (Salomón Lerner) addresses Congress, he will give specific details” on the issue, she said.

“It was a short, 40-minute address full of generalities,” said Cuadros. “We were also expecting a statement on the question of prior consultation of rural native communities on decisions that affect their lives and customs.”

Another important pending issue that many were hoping to hear concrete mention of in Thursday’s address was the question of reparations for the families of victims of the counterinsurgency fight during the 1980-2000 civil war. The issue was only briefly referred to by Humala.

As an army captain in 1992, Humala headed a counterinsurgency base in the jungle town of Madre Mía, as part of the government’s fight against the Maoist Sendero Luminoso (Shining Path) guerrillas. He was even accused of human rights violations, although he was acquitted in court, after witnesses recanted.

Referring to the need for “individual and collective reparations” for the victims of the “terrorist violence,” he said the victims and their families must “rebuild their lives and be able to look towards their future with other eyes, because they live in a fatherland that includes them and recognises them as Peruvians.”

In June, the García administration approved the payment of reparations, ranging from 1,785 to 3,571 dollars, to rape victims, people left with disabilities, widows and elderly family members of victims.

By comparison, however, the families of police officers who were killed or disabled in the armed conflict received reparations of up to 20,000 dollars, and the members of the “rondas campesinas” or paramilitary peasant self-defence groups received up to 11,430 dollars.

“We were hoping for a speech with much greater content in terms of human rights,” Carlos Rivera, director of the Legal Defence Institute (IDL), a local human rights group, told IPS. “During the campaign, the ‘judicialisation’ of the human rights cases was discussed, but in practice the issue has not been addressed in a concrete and specific manner.”

“He didn’t say a single word about justice in relation to crimes against humanity,” he said.

“It is important, because the issue generates conflict and confrontations, which means it is indispensable for the new president to make sure that he will not meddle in judicial decisions. That is why I regret that he did not say anything about it, to mark a difference with the García administration,” Rivera said.