UNITED NATIONS, Jul 25 2011 (IPS) - The work of the International Criminal Court (ICC), the world’s first and only permanent court that pursues war criminals, is likely to be hampered by a shortage of funds next year. 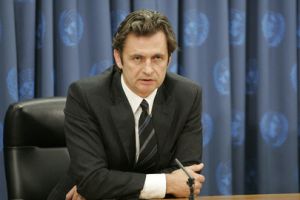 If the court does not get the necessary funding, due primarily to proposed “zero growth” in its budget, at least six active investigations in the Central African Republic, the Democratic Republic of Congo, Sudan, Uganda, Kenya and Libya could be affected.

In an interview with IPS, the president of the Assembly of States Parties and permanent representative of Liechtenstein to the U.N., Christian Wenaweser, spoke about the troubles in the formulation of the budget for 2012.

“Part of the difficulty stems from the extremely high costs arising from the situations referred by the Security Council to the court,” he said.

Currently, the ICC’s member states bear the entire financial burden of its mandate, something that was not foreseen by the drafters of the Rome Statute, which created the ICC.

“The time has come for the United Nations to pay for the investigations it refers to the court,” he added.

According to the Coalition for the ICC and Amnesty International, the budget for 2011 was 149 million dollars. A “zero growth” budget in 2012 could affect the six active investigations, they warn.

The ICC is financed by its 116 member states, using the scale adopted by the United Nations for its regular budget, so that the main contributors are Japan, Germany and the UK. The United States is not a contributor of the ICC because is not a signatory of the Rome Statute.

Once presented by the ICC, the Committee on Budget and Finance makes recommendations to the Assembly of States Parties and the countries approve the funds for the next year.

Q: Who are the major funders of the ICC budget? A: The ICC has essentially the same scale of assessments as the United Nations. Consequently, those ICC States Parties that are the greatest contributors to the United Nations are also the major funders of the ICC budget. Japan, Germany, the United Kingdom, France, Italy, Canada, Spain, Mexico, the Republic of Korea and Australia are the top 10 States Parties in this respect.

Q: How does the ICC punish delays in contributions by the States Parties? A: At the last session of the Assembly of States Parties, a small number of countries had arrears amounting to two years of contributions. As in the United Nations General Assembly, such countries lose their right to vote in the Assembly, but they may apply for an exception to that rule if the inability to pay is beyond their control, as may be the case for least developed countries.

For substantial delays of less than two years, however, there are no such clear sanctions. Overall, however, States Parties do actually make their payments in a rather responsible manner.

Q: How does the Contingency Fund work? A: The Contingency Fund was established in 2004 to help the Court deal with unforeseen expenses, in particular since judicial activities are extremely difficult to forecast in a budget planning process. The Court must notify States Parties of its intention to tap into the Fund, and it may only do so where it has actually run out of money under its approved budget.

Due to the Security Council referral of the situation in Libya, the Court has already concluded that it will have to make use of the Fund. There is a legal requirement that the resources available in the Fund should not fall below 7 million euros (about 10 million dollars). Due to a number of unforeseen funding requirements, the fund would thus have to be replenished.

Q: The ICC is working in six different cases and there is the chance of a new investigation in Cote d’Ivoire. Do you think the ICC will need to increase its budget for 2012? A: At this stage in the budget planning process, it is up to the Court to make this assessment. Currently the Court assumes it will need an increase of 13 percent. At the next phase, the Committee on Budget and Finance (CBF) will subject this budget proposal to close scrutiny, before States make the final decision at the December session of the Assembly.

Q: The convenor of the Coalition for the ICC, William Pace, said that France and the UK were demanding “zero growth” budget for 2012, even though they were among the nations that asked the ICC to probe Libya’s regime. What can you say about it? A: States Parties will have to embark on difficult budget negotiations in December 2011. I would therefore prefer not to comment on the positions of individual States Parties.

Part of the difficulty stems from the extremely high costs arising from the situations referred by the Security Council to the Court. Currently, the ICC’s States Parties bear the entire financial burden of these situations, something that was not foreseen by the drafters of the Rome Statute. The time has come for the United Nations to pay for the investigations it refers to the Court.

Q: How can the U.N. pay for these investigations if it also depends on a limited budget from member states? A: The money would in the end of course come from U.N. member states, not from the U.N. as such, and there is already much overlap in the list of the biggest contributors of both organisations. The U.N. General Assembly would have to take a specific decision regarding the full or partial reimbursement of these costs, which would then be binding on all U.N. Member States. Such arrangements are already foreseen in the Relationship Agreement between the United Nations and the ICC.