UNITED NATIONS, Jul 7 2011 (IPS) - As UN Women, the new United Nations agency dedicated to enhancing gender equality, releases its first major report following the organisation’s launch early this year, its most significant finding may be the shared challenges faced by women across the globe. 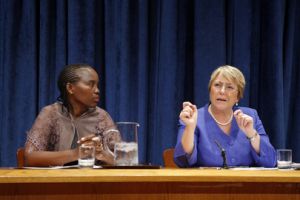 “Despite the fact that women’s lives all over the world are very different in many ways, a lot of the challenges that women face in very different countries are actually quite similar,” said the report’s lead author, Laura Turquet, in an interview with IPS.

She noted similarities between Europe and South Africa, Rwanda and Nepal. “So it’s not particularly about level of income,” she said, “it’s actually about approaches that governments take to address these problems.”

And the premier edition of the “Progress of the World’s Women” report, released Wednesday, highlights the importance of the justice system in conquering these challenges.

“We chose justice for the theme of our first report because, really, we think it’s an issue that underpins all of the things that UN Women cares about,” explained Turquet. “It really underpins gender equality.”

She said that women's representation is still a major challenge to achieving gender equality - both in developing and developed countries.

"I think there's always going to be resistance where you're challenging entrenched power imbalances," she said.

However, she noted one sphere in which some progress could easily be made: "It would be wonderful to have a woman Secretary-General of the UN," she conceded.

The recent re-election of Ban Ki-moon's to another 5-year term left some wondering when a female leader would get her turn.

But, while the United Nations system has not reached equal gender parity, UN Women chief Michelle Bachelet said, "It's not bad at all."

"We have more women in decision-making positions than ever in the history," Bachelet told IPS, "and we have a lot of women as principles of agencies, we have a lot of special envoys, and special representatives."

Turquet added that, while it is essential to have women in those positions, it is equally important that men in high-level posts are supportive of women's rights as well.

"We need women role models and leaders, but I think we also need to make sure that we're holding our male leaders to account for gender equality and women's empowerment," she told IPS.

She acknowledged the "instrumental" role that Ban Ki-moon has played in forming UN Women.

Bachelet said that one of the biggest tasks in ensuring gender equality within the United Nations is to increase the accountability inside the system – "so that we can ensure a bigger female presence, not only at high, top level, but also at the different levels of the U.N."


According to the report, laws and justice systems are what shape social attitudes.

“We know that laws can change societies,” said Michelle Bachelet, UN Women’s executive director and the former president of Chile. But she noted that “laws are made by people, and they have to represent the evolution of situations.”

That is why the report aims to highlight key actions that governments and civil society can take to legally and judicially enhance gender equality. It also demonstrates the possibilities for women to advance their own rights, noting, for example, the dramatic increase in sexual assault reporting when police forces are comprised of female officers.

“Women can play a critical role in driving the change we need to see,” said Bachelet, and the report recommends putting women “on the front line of law enforcement.”

But while, according to Bachelet, “in too many countries the rule of law still rules women out,” Turquet described the vast improvements around the world in terms of women’s legal rights.

“Just a century ago, only two countries in the world allowed women to vote, and now that right is more or less universal,” she said, noting the number of constitutions that now guarantee gender equality (139) and the number of countries that have equal pay laws (117).

Despite this progress, however, “we are seeing these enormous implementation gaps between the laws that exist on paper and reality,” Turquet said.

Sometimes, monetary incentives can narrow these gaps. The report details women’s inheritance rights in Nepal, which were legislated in the early 1990s but rarely observed until a tax exemption for land transfers was introduced, motivating men to share land with their female counterparts.

In most cases, however, simply accessing the justice system is the greatest challenge to implementing gender equality laws.

First, there is the long and complicated justice chain that women must navigate before they can attain justice.

In a sexual assault case, for example, the process spans from reporting the incident to interviewing the victim, to identifying, interviewing, and charging the suspect, to the eventual trial, and then the possible conviction. Even in Europe only a fraction of reported rape cases result in conviction, according to the report.

The report highlights one South African solution to this process: the One-Stop Shop model, which brings services like health care, legal advice, the police, and forensic services together “under one roof”, according to Turquet.

“It cuts down on the number of steps that women have to take and helps to reduce the number of cases that drop out of the system,” she explained, noting a conviction rate of 89 percent – up from the seven percent national average – in some One-Stop Shop areas.

Another challenge is physically accessing courts for trial.

The Mobile Court model, used primarily in the Democratic Republic of Congo, provides an effective solution. That country’s sheer vastness, as well as its citizens’ pervasive poverty, often prevents women from attaining justice, according to the report.

“This [Mobile Court] initiative, which is relatively small scale at the moment, has been incredibly successful at reaching women in remote rural areas,” Turquet told IPS.

“In countries with weak infrastructure, it’s probably much cheaper to use mobile courts than it is to build expensive courtrooms, which, then, people won’t be able to access,” she said.

She described a recent case, involving the rape of 40 women and girls in the Democratic Republic of the Congo, which was tried in a mobile court. It was the first ever crimes against humanity trial heard in a mobile court, and it successfully garnered a large number of high- level convictions, she said.

But, according to Turquet, there is however still a great need for investment in women’s access to justice. She said that 2009 saw 4.2 billion dollars in bilateral donations allocated to justice work, but of that, only five percent was spent specifically targeting women and girls.

“There needs to be greater investment in the kind of justice that women and girls need,” she said.

For now, tackling these challenges will be the main objective for UN Women, which held its first annual Executive Board meeting last week in New York.

“Legislating is only the first step,” according to Bachelet. She wants to work together with governments towards better implementation and delivery of justice.

But the six-month-old agency must do so with the minimal funding it has received. Its budget this year is 300 million dollars – of which 120 million dollars has not been earmarked for specific purposes.

At its commencement, then, “the key for UN Women will be to work with all our partners to drive forward those goals,” said Turquet.