SOUTH SUDAN: A Country Split – But What Happens to the People?

JUBA, Jul 12 2011 (IPS) - When the Republic of South Sudan gained independence from the north, it was more than a geographical split. Families in South Sudan and Sudan could be forced apart as both countries wrangle out the issue of citizenship and who belongs where. 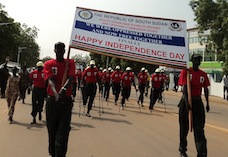 In South Sudan there are northerners who have only ever lived in the south. And in the north there are Southern Sudanese who have lived there their entire lives. But with the independence of the south many families may have to move back to their country of origin.

Although the Republic of South Sudan and Sudan are yet to agree on the issue of citizenship following the split, the south says it will grant citizenship to northerners in the south.

“Northern Sudanese who wish to remain in the south will be allowed to do so if they apply for citizenship through the procedures that will be laid down,” said South Sudan’s information minister and government spokesman, Barnaba Marila Benjamin.

However, Sudan has indicated that South Sudanese in the north would lose their citizenship in Sudan and become “foreigners” in the north.

Lillian Rizik of the South Sudan Women Empowerment Network called on leaders on both sides to guarantee citizenship for citizens from both sides.

“When south and north are discussing these issues, they should take into consideration some of our concerns as women,” Rizik said.

A Northern Sudanese trader in Juba, Alsaniosi Abbas, did not want to return to the north, a place he left several decades ago. “I have been doing business in South Sudan for the last 35 years. All my friends are here in the south. I would like to remain here,” he said. “But if the government forces us to leave the south we will obey, but life will never be the same.”

While the majority of South Sudanese are rejoicing that they are now independent, for the northern Sudanese the split has been a sad chapter in the country’s history. Ahmed Rahma, a religious leader from the north, witnessed the declaration of independence in Juba over the weekend and said the split was “like having one of your body parts amputated. It is very painful.”

For President Omar Al-Bashir and his National Congress Party the split has undermined his and the party’s authority as he is blamed for overseeing the breakup of the country. Many argue that Al-Bashir’s political future is at risk. However, one of Al- Bashir’s close advisors, Ibrahim Ghandour, was quoted in the media as having said that Al-Bashir will remain in firm control of Sudan.

“I do not think his position will be weakened. Many people here (in north Sudan) see that losing the south is a good thing,” he said. “President Bashir will go down as the person who ended war and brought peace by signing the Comprehensive Peace Agreement and respected the wishes of the people in the south.”

Politically another impact of the split is that Shariah law may be strengthened in the north. Following the declaration of South Sudan’s independence, one of the tasks of the leadership in northern Sudan is to undertake the writing of a new constitution. Al-Bashir said in June that a new constitution would be based on Islamic law and insisted there would be no space for cultural and religious diversity.

After gaining its independence the Republic of South Sudan is now faced with several challenges and these include, among others, poverty, lack of infrastructure, tensions with the north and corruption.

Lazarus Sumbeiywo, the chief mediator of the talks that led to the signing of the 2005 Comprehensive Peace Agreement that provided for the processes that led to the independence of the south, said the leadership of South Sudan would need to unite the people in order to move forward.

“There isn’t a lot of trust among South Sudanese because of the long war they fought… And therefore you have to be cohesive for you to move forward,” said Sumbeiywo.

Because of the lack of infrastructure and institutions, South Sudan would need support from the international community in order to move forward, he said.

“They have not run systems and institutions for themselves (before) therefore they would need friends from far and near to help them move forward,” Sumbeiywo said.

Economically South Sudan, which is one of the poorest countries on earth, will require massive investment to allow it to move forward. South Sudan’s Vice President, Riech Machar Teny, said prior to independence government officials were working hard to woo investors, despite the lack of physical infrastructure and insecurity in some places.

“We are travelling around the globe to find people who can invest here so that we can change the face of South Sudan,” said Teny.

For this to happen South Sudan will have to first create a secure environment both in terms of legislation and security. Currently the biggest cause of insecurity is cattle raids. In Jonglei state 400 people have been killed since the beginning of this year in cattle raids.

Gabriel Duop Lam, minister of law enforcement in Jonglei, says they are unable to enforce the law “because civilians who possess arms outnumber law enforcement officers.”

James Ladu, a development worker in Juba, summed up the way forward for the new country.