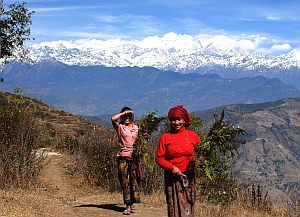 Mulkharka's women cleaning up the trekking trail that is an economic lifeline for the village. Credit: Arun Shrestha/IPS

However, when all three came back empty-handed, with complaints of being poorly paid, their mother, who runs a small tea house, became the breadwinner of the family.

Unlike her sons, 46-year-old Sherpa is illiterate but capably runs the ‘Riverside Khajaghar’ tea house. Once an unassuming eatery it began to get better custom after an old trekking trail running through the village was revived by a local non-government organisation (NGO).

“There are 200 houses in Mulkharka,” says Ashok Maharjan, secretary at Nepal Environment and Tourism Initiative Foundation (NETIF), an NGO founded in 2006 to develop and sustain the environment and rural tourism. “Around 60 percent of the population consists of women and it is mostly they who run the tea houses and trekkers’ lodges.”

Thousands of women like Dawa have been shouldering the double burden of looking after the family and earning for them as husbands and sons went abroad in search of jobs as a 10-year civil war exacerbated poverty and unemployment in Nepal.

With tourism the mainstay, the government launched in 2001 the Tourism for Rural Poverty Alleviation Programme aimed at developing sustainable rural tourism, focusing on the poor, women, environment and community.

Funded by the United Nations Development Programme (UNDP)in Nepal, the British government’s Department for International Development, and the Netherlands Development Organisation, the programme operates in six districts outside the Kathmandu valley, building infrastructure and providing training to run micro enterprises.

“An old trekking trail existed here, but it became disused for lack of maintenance,” says Prabin Paudel, coordinator of the heritage trail project. “We helped the community repair and green it by planting trees. Last month, in Chisapani alone 3,200 rhododendron saplings were planted.”

In Mulkharka, where cooking gas is yet to make its appearance, villagers use firewood for cooking. It caused widespread felling of trees, forced the women to spent several hours of their day scrounging the forest for wood, and also led to eye and respiratory diseases caused by the smoky, primitive clay stoves they used.

NETIF began by offering new improved cooking stoves that reduced wood consumption by almost 50 percent. These are manufactured by the Alternative Energy Promotion Centre run by the environment ministry under its energy sector assistance programme supported by the Danish International Development Agency.

“We then provided them training in briquette-making,” says NETIF president Arun Shrestha. “These are processed from either dung or banmara (mikania micrantha), a pernicious weed that overruns and destroys forests.”

This was rounded off with training in organic farming, so that the women can grow vegetables and crops like maize, basic hotel training and skills in making handicraft items.

More tourists means better business for the tea shops and lodges. Dawa Gyalmo is planning to upgrade Riverside Khajaghar to a lodge for trekkers to stay overnight.

Other women are following suit. The new demand for financing has given rise to six major women’s groups in Mulkharka with the members starting their own micro-finance cooperatives.

“Each woman contributes about Nepali Rs 100-200 (1-2.5 US dollars) and the accumulated fund is loaned out,” says Dawa Sherpa, secretary of the Sundarijal Environment and Tourism Development Society. “They decided to form their own cooperatives after they realised that loans taken from the outside carried far higher interest.”

Tourists bring business, but litter the trail with plastic bags, mineral water bottles and wrappers. Women’s groups now voluntarily scour the entire trail twice a year segregating biodegradable waste and burning it in incinerators gifted by NETIF. The rest is taken down to the municipality’s garbage collectors.

MEDEP’s 7-9 day ecotourism trek through the districts of Parbat, Myagdi and Baglung includes a stay in a 20-bed lodge that is expected to bring in dollars.

The indigenous Magar community, which provides the bulk of the ‘Gurkhas’ serving in the British and Indian armies, dominate the region. With Magar men mostly out of the country, their women take all the key decisions at home.

“While we put up 60 percent of the money for the lodge, the community contributed 40 percent,” says MEDEP’s Laxmi Pun. “The revenue earned by the lodge will go back to the community,” she said.