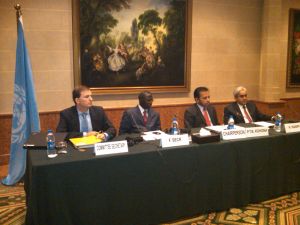 And not surprisingly, the committee was barred from entering any of the occupied territories – forcing the three members to hold sittings in Cairo, Amman and Damascus where Palestinians from the West Bank and Gaza were given a hearing twice a year.

But geopolitics in the region has dramatically changed the political climate – much to the chagrin of the Israelis.

For the first time in 43 years, members of the ‘U.N. Special Committee to Investigate Israeli Practices in Occupied Territories’ gained entry into Gaza last week, through Egypt which has ousted its Israeli-friendly president, Hosni Mubarak.

The new Egyptian government facilitated the visit via the border crossing at Rafah, breaking the longstanding Israeli taboo.

The visit further reinforced the continued criticism by the committee of the horrible living conditions in the occupied territories and the devastating impact of the Israeli economic blockade, as chronicled in several of the committee’s previous reports.

In a critical report released Friday, the committee expressed dismay at Israel’s “continuing disregard of its obligations under international law”.

“Unfortunately, what we found [in Gaza] was that the oppressive restrictions imposed on Gaza by Israel have the effect of collectively punishing the population,” it said.

With around 35 percent of Gaza’s land area excluded from agriculture due to Israel’s vague buffer zone along the border, and its fishing areas limited to only three nautical miles from the coast (85 percent of fisheries), the people of Gaza could hardly feed themselves, much less revive a decimated economy through exports, the committee said.

“We were alarmed by allegations that Israel enforces these policies employing live fire, including in some instances against children and the elderly,” said the committee.

Ambassador Kohona told IPS the conditions in the Gaza, “to say the least, are very unsatisfactory, and the blockade is to be blamed for this”.

“The economic, educational, psychological, health and social conditions are affected by the blockade,” he asserted.

The lifting of the blockade will have an immediate and positive impact on the people of Gaza, both economically and psychologically, and will contribute to confidence building, he added.

Israel’s continuing blockade of Gaza contravenes the human rights of the people of Gaza and international humanitarian law and standards, said Kohona, a former chief of the U.N. Treaty Section.

“It is oppressive and diminishes the lives of the people of Gaza and must be ended now,” he declared

In its report, the committee said it listened to victims, witnesses and U.N. officials who underlined the dire impact on human rights of the Israeli blockade.

Homes, schools and other infrastructure that were destroyed by Israeli attacks in December 2008 and January 2009 could not be rebuilt due to restrictions on the import of building material.

The economy declined significantly and is sustained by illegal imports through tunnels.

“It would be the occupying powers responsibility to assist with the reconstruction of Gaza”, noted the committee.

Beyond the homes, schools and businesses that were destroyed, there is an urgent need for water treatment facilities, roads, sewage treatment and the restoration of power, it said.

The committee also noted the valuable services provided by local and international nongovernmental organisations (NGOs), and especially the U.N. Relief and Works Agency for Palestine Refugees in the Near East(UNRWA).

For many of Gaza’s children, life is difficult and the future is hopeless, the committee pointed out, referring to testimony concerning worrying health, psychological and social problems, increasing school dropout rates, and an increasing incidence of child labour.

“We hope the government of Israel will seriously consider the potential consequences of a generation of Gazan children being raised in an environment of near-total deprivation and a lack of opportunities to lead a productive and hopeful life,” it said.

The policies and practices of the government of Israel which violate the rights of Palestinian children was a constant theme throughout the hearings in Gaza.

Witnesses and officials reported that Palestinian children’s access to education is being impeded through, among other things, restrictions on freedom of movement, constraints on access due to the security wall, a lack of schools especially in East Jerusalem and Gaza, and threats and actual violence by Israeli settlers.

The committee said its attention was drawn to the large number of children detained, and in this regard, a range of practices of serious concern, including harsh interrogation techniques, torture, and expulsion from their villages.

The committee also underlined its deep concern regarding reports that Israeli security forces are raiding Palestinian homes in the middle of the night to detain children, allegedly as young as seven years old.

The committee’s nine-day investigative visit to the region also included hearings in the Jordanian capital of Amman, where it met with victims, witnesses and officials working on human rights in the West Bank and the Syrian Golan Heights.

Asked about security and his personal impressions of Gaza, Kohona told IPS, “We travelled in armoured vehicles and were provided high- level security cover by the United Nations.”

From the hotel terrace, he said, “We could imagine what Gaza would be like without the current blockade.”

“Families joyfully dining on the terrace while the red orb of the sun was slowly descending in to the Mediterranean, whiffs of shisha (bubbly hubbly) drifting in the air, children playing, fishing boats heading in the sea, etc. Perhaps one day!”