NASHVILLE, Tennessee, USA, Jul 14 2011 - While Americans are taking sides in the ongoing battle about the future of American healthcare, one underrepresented group is especially vulnerable to the change – or lack of change – that may be afoot: the homeless community. 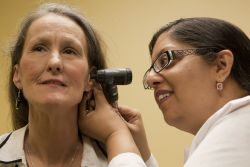 Most people in the U.S. think that everybody living in poverty is eligible for Medicaid, but this is not the case. Poor adults who are disabled or are parents are most often eligible, but for adults who don’t fall in these categories there may be no safety net available.

A non-disabled childless adult – even with ongoing, chronic health concerns – will likely not find relief and assistance through Medicaid. Mothers who have lost their children to foster care and adolescents who have outgrown the foster care system often also face a tight squeeze between the rock-and-a-hard-place that poverty and lack of healthcare represent. A nationwide study in 1996 found that only a quarter of America’s homeless population was enrolled in Medicaid.

The issues of homelessness and healthcare are so interconnected that it’s nearly impossible to consider the former without investigating the latter. Understanding the relationship between physical health, the cost of care and homelessness is in many ways a Rosetta Stone that clarifies the complex snarl of issues that surround homelessness. As soon as one takes the time to pull at the threads of how America’s healthcare system affects the poor, an understanding about homelessness comes into drastic, dramatic relief.

The relationship between healthcare and homelessness is cyclical, severe, relentless and pervasive. Many people find their exit to a life on the street as a direct result of a health crisis. That desperate path is marked by the too-often tread footfalls that pass from untreated illness into disability and unemployment – which, of course, is a leading cause of homelessness.

In addition, whether a person has insurance or not, the leading cause of bankruptcy in America is a crushing wave of medical expenses. Income and illness are completely intertwined in America’s for-profit healthcare model, and when poor people can’t pay, those poor people may lose their homes. And a life on the streets is a life of illness and injury that starts the cycle turning back on itself.

“Life on the streets is brutal and short,” says Bill Friskics-Warren. “Studies done in several U.S. cities have shown that the average lifespan of someone living on the streets is more than 30 years shorter than that of their housed counterparts.”

Friskics-Warren manages the United Neighborhood Health Services’ (UNHS) homeless programmes in Nashville, including the Downtown Clinic, the evening clinics in the basement of the Nashville Rescue Mission, and the UNHS’ mobile medical unit. In his experience, homeless people are not only vulnerable to health threats from the elements and violence, but also because of lack of treatment for chronic illnesses and conditions.

“Of the nearly 4,000 different people who were treated at the Downtown Clinic in 2010, 44 percent had high blood pressure, 16 percent were diabetic and 36 percent had documented mental health and/or addiction disorders,” says Friskics-Warren.

Among other patients, chronic obstructive pulmonary disease, AIDS, tuberculosis and malnutrition were common along with the ubiquitous anxiety or depression that afflict most everyone who lives day-to-day with no place to call home.

UNHS has implemented a creative array of facilities and services to address the special needs of Nashville’s homeless population. The organisation took over operation of the Downtown Clinic in the fall of 2008, and their mobile medical unit is also allowing them to reach into isolated homeless communities, making healthcare available to people who may have no means of making the trip to the downtown facility or one of the satellite clinics.

“The unit enables us to meet people where they are, whether in a shelter or at a congregate meal site or encampment,” explains Friskics-Warren. “Having to venture across the Cumberland River to receive services at our Downtown Clinic can be a barrier to someone who might be camping in Shelby Bottoms.

“Sitting in the almost always crowded lobby of the Downtown Clinic can be difficult for someone with fragile mental health or sensory integration issues. Knocking on the door of our mobile unit when it’s parked outside the day shelter where you wash your clothes each week, though, may be less emotionally or logistically daunting for some people who are homeless.”

Many may hesitate taking a trip to the doctor out of anxiety or inconvenience, but most in the homeless community make an even more concentrated effort to avoid medical care. With little resources available and few alternatives at hand, most homeless people will only visit a doctor by passing through the emergency room doors.

As a result, a nasty cut becomes a limb-threatening infection and a seasonal cold results in pneumonia. The excessive costs involved in these preventable emergencies are ultimately another symptom of a healthcare philosophy that reacts to trauma and cures illness rather than maintaining health and promoting prevention. And once a person is discharged back out into the dangers on the street, it’s only a matter of time before they make a return trip.

Facing up to these hard facts, many municipalities and hospitals have begun to implement unique solutions that are designed to break the links between healthcare and homelessness by prescribing shelter as part of their cures.

Seattle, Washington’s Downtown Emergency Service Center has made a dramatic impact on the lives of chronic alcoholics on the streets of the city. The centre’s supportive housing project has seen the incarceration rate of its residents cut in half, while the hospitalisation rate has been reduced by a third.

The financial result for both the federal government and the City of Seattle can be sung to the tune of millions of dollars in savings. In Chicago, Illinois, the Chicago Housing for Health Partnership has also shown that homeless patients who received immediate housing and intensive case management were a third less likely to visit a jail cell or a hospital.

In Nashville, Room In The Inn provides a respite care programme which offers a safe place for homeless people to recover from illness or hospitalisation. Shelter, meals and medications are buttressed by needs assessments and advocacy efforts that attempt to connect patients with mainstream medical services. This web of security and support greatly increases the chances for successful recoveries, and severely lowers the costs incurred from emergency room care and incarceration.

The connections between homelessness, healthcare, state and federal budgets, and the health of the country’s social fabric are abundantly clear: homelessness is a healthcare issue, and when housing is a part of the prescription, everybody wins.

At a recent National Conference on Ending Homelessness, Department of Housing and Urban Development Secretary Shaun Donovan stated, “…if we want to tackle healthcare reform – if we want to lower costs – we must tackle homelessness. It’s that simple.”

Regarding the connections between homelessness and healthcare, John Lozier couldn’t agree more. “It’s a profound and well-established relationship.” Lozier is the Executive Director of the National Healthcare for the Homeless Council (NHCHC), the blanket organisation of which the United Neighborhood Health Services is a member.

Lozier and his group are one reason why a new understanding about the cost-effectiveness of ending homelessness is beginning to gain traction at the federal level. But it’s been a long road.

In 1986 the National Academy of Science published its groundbreaking report “Homelessness, Health, and Human Needs.” The report clarified a trinity of relationships between homelessness and healthcare that demonstrated the profound connections between the two issues: 1) Poor health leads to homelessness; 2) Homeless people receive poor healthcare; 3) Homelessness complicates treatment.

Almost exactly a year ago, a quarter of a century after the report came out, the Obama administration enacted Opening Doors: The Federal Strategic Plan to Prevent and End Homelessness, a programme that intends to end child and family homelessness in the U.S. within the next 10 years.

Monitoring and influencing policies that affect the homeless community is a central mission of the National Healthcare for the Homeless Council. “Since our beginning we’ve incorporated policy advocacy into the work we do and the work of the groups we support around the country.”

In fact, the NHCHC places much of the blame for the country’s homeless problem on public policy. As NHCHC explains on its website, “Contemporary homelessness is the product of conscious social and economic policy decisions…”

For Lozier, the slippery slope began with federal cuts to the U.S. Department of Housing and Urban Development that began in the late 1970s. “It started in the Carter administration and came to full force under Reagan,” he explains. “There was a decision to pull housing supports out from under homeless people.”

When it comes to advocating for new policies to help end homelessness, the NHCHC isn’t just fighting for what it perceives to be the needs of people living on the streets. For Lozier and the organisation, healthcare and shelter must be made available to all people regardless of their ability to pay. He supports his argument by citing the United Nations’ Universal Declaration of Human Rights which was adopted on December 10, 1948.

“Human rights are expressions of what is necessary for human beings to live in the first place,” he explains. “The first are food, clothing, shelter and medical care. We all have a mutual responsibility to see that we all have these rights.” While the U.S. has never endorsed the declaration, Lozier and the NHCHC are spearheading efforts to ensure that programmes like Open Doors continue to move in accordance with its recommendations.