SÃO GONÇALO, Brazil, Aug 26 2011 (IPS) - The assassination of Brazilian Judge Patrícia Acioli, who was investigating militias made up of off-duty police and death squads, points to a new stage of organised crime, which is expanding into the vacuum left by the impunity surrounding 90 percent of murders in the state of Rio de Janeiro. 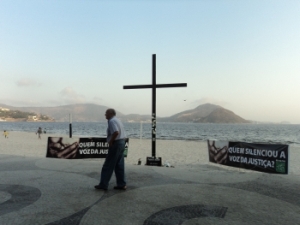 A lonely cross on a beach in the city of Niteroi, some 30 km from the city of Rio de Janeiro, is a symbol of the tragedy.

Very few people stop to look at, or pay homage before, the tall cross, which was erected by the Rio de Paz peace movement to commemorate the Aug. 12 murder of the judge, who was pumped full of bullets – at least 21 were fired by gunmen from several vehicles – in front of her house in that city.

Many people can be seen jogging along the beach every morning, others take photos of the Atlantic Ocean and the surrounding hills. Only one slow-moving elderly man rests briefly in front of the memorial, reading the scraps of paper pasted there by Acioli’s family members, friends and colleagues, calling for the killers to be punished.

“Anywhere else in the world, this cross would be covered with flowers,” the president of Rio de Paz, Antônio Carlos Costa, tells IPS. He is visiting the memorial, where his organisation plans to hold a demonstration to protest the appalling murder and raise awareness of how serious the situation is.

“This time, organised crime was bold enough to target a prominent figure representing the democratic rule of law. This was an attempt to silence our judiciary. We see that as extremely grave, from every point of view,” he said.

Violence and impunity are no strangers to this city, which is located just across Guanabara Bay from Rio de Janeiro, the city that will host the Olympic Games in 2016.

The state government’s public security institute counted 31,000 “violent deaths” between 2007 and July 2011 – a category that encompasses everything from manslaughter and grievous bodily harm resulting in death to “acts of resistance”, as the police describe incidents in which they kill alleged criminal suspects.

According to rights watchdog Amnesty International, some 1,000 people a year are killed by the police in Rio de Janeiro alone.

And a full 90 percent of homicides go unpunished in Rio de Janeiro, Costa pointed out.

But the assassination of a judge is cause for special concern because it represents the start of “a new crime phenomenon” in Brazil, a “Mexicanisation”, Costa said, alluding to the dramatic escalation of violence in the deadly drug war in that country.

“Yesterday it was a judge, a lawmaker, next it could be the columnist of a large newspaper or a social activist,” he said. “This crime was extremely serious because of what it represents for the institutions of a democratic state, but regrettably society hasn’t understood that.”

But the authorities do appear to be reacting to a case they also see as emblematic.

After introducing new security measures in the court where Acioli worked, in the neighbouring city of São Gonçalo, the state attorney general, Claudio Lopes, said the judicial and executive branches were determined “to find the perpetrators as quickly as possible.”

Lopes told IPS “those killers shouldn’t think the judge’s murder will go unsolved and unpunished – that is exactly what will not happen.”

“This is a typical revenge killing, a case of intimidation of a very brave judge,” state Governor Sérgio Cabral said in a press conference.

Acioli, 47, had a reputation for taking a hard line against criminals, and had many enemies – among drug traffickers, corrupt police, and members of gambling and illegal public transport mafias, and of militias made up of off-duty police, who passed through her court room.

Although it is not clear who killed her, there is a consensus on why she was killed. “She was an independent and courageous woman,” Costa said. “She cracked down on some of the worst scoundrels in Rio de Janeiro. She fought organised crime and death squads. There is not a shadow of a doubt that her death was related to her commitment to justice.”

The president of the São Gonçalo branch of the Brazilian bar association, José Luís Muniz, told IPS that the murder “was an attack on the judicial system, an attempt to intimidate it and make it stop investigating and cracking down on the different mafias operating out there.”

In the last few days, the investigations have focused on police stations in the region. The civil police are investigating the names on a list of 91 military police implicated in murder cases being handled by Acioli’s court, 50 of which involved “acts of resistance”.

The ammunition used in Acioli’s murder, in which two cars and two motorcycles were involved, were reportedly from guns used by the military police, according to information leaked to the press despite the secrecy surrounding the case.

Costa said the only way to curb the “Mexicanisation” of the city is to start by purging and reforming the police force, where “organised crime has its tentacles,” and attack other “tentacles” in the executive and legislative powers.

“We are facing a task that will require major mobilisation on the part of society,” he said.

Gabriela Knaul, a Brazilian judge who is United Nations Special Rapporteur on the Independence of Judges and Lawyers, demanded answers.

Acioli’s murder “is evidence of an extremely serious and persistent problem in terms of protecting judges in Brazil,” said Knaul, pointing out that many of the judges facing threats are on death squad lists.

The lists also include the names of human rights activists, legislators and anyone else who has dared to try to dismantle the militias.

“By attacking a judge, they are sending a message to the rest of the judges, prosecutors and witnesses – who are a fundamental part of any legal proceedings – to ‘be careful, because if we dare to kill a judge, we could do the same to you’,” Muniz said.

“Who has silenced the voice of justice?” ask two banners strung up near the cross, which only has the company of a single bouquet of white roses on the busy beach.