BOGOTÁ, Aug 26 2011 (IPS) - The more than 1.2 million microenterprises operating in Colombia are responsible for around 50 percent of all employment. And many of these small businesses owe their existence to the microfinance system, according to a report by Visión Económica, a local business research group. 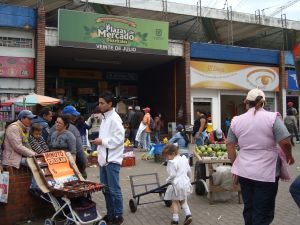 Street vendors are the main beneficiaries of micro-loans in Colombia. Credit: Helda Martínez/IPS

Microenterprises and small businesses represent 96 percent of all companies in Colombia, while medium-sized companies make up 3.6 percent and large companies 0.4 percent, according to the National Department of Statistics.

Small and micro-businesses are classified as those worth 147,000 dollars or less, with a debt capacity of no more than 120 minimum monthly salaries – the equivalent of 37,000 dollars – and with up to 10 employees.

Microenterprises employ an average of 2.6 people in Colombia, according to the Visión Económica report, published in July.

Small companies fuel demand for microfinance, because “they generally do not meet the requirements set by commercial banks, which do not lend money to people with limited economic resources either, due to the risk of default,” Jorge Varón, the manager of the development credit fund of the Colombians Supporting Colombians (CAC) programme, told IPS.

CAC, which emerged in 2001 with backing from the United States Agency for International Development (USAID), works in municipal development with an emphasis on participatory planning.

USAID “supported us until 2005 in the development of social projects and in meeting the requirements to launch a microcredit programme, which began to operate in 2004. Today, we are autonomous,” said Varón.

Microfinance really began to expand in this South American country in 2007.

“Microcredit grew at a steady rate of 15 percent between 2007 and 2010,” says the Visión Económica study.

However, micro-loan funds in Colombia date back at least 26 years ago, to the emergence of the Women’s World Foundation (FMM) which actually grants microcredit “to both men and women,” Jhasnedy Niño, who works in the foundation’s office in 20 de Julio, a working-class neighbourhood on the south side of Bogotá, told IPS.

Varón also said “We lend to people of different ages and educational levels. But women do currently hold 69 percent of our loans.

“That’s why we also have an emergency loan programme, for heads of households. They are small amounts, between 28 and 286 dollars, to be paid back in one to five months,” he added.

Among the recipients of the small loans are women who make a living as vendors of food, clothing and other products, at sidewalk stands or small shops.

One such vendor is Marta Linares, who IPS ran into at the FMM office asking for information. “I want to know how it works. But it depends on the payments, because if they’re really high I can’t apply for the loan,” said the street vendor who sells plastic products. “I could pay a maximum of around 40 dollars a month.”

Varón said the CAC credit fund grants loans of between “28 and 14,300 dollars, at a monthly interest of 2.1 percent…with repayment periods of one month for ’emergency’ loans and between three and 36 months for other kinds.”

Interest rates for micro-loans in Colombia are regulated by national law and by decree 919, modified in 2008 to facilitate the expansion of microfinance and distinguish micro-lending from consumption lending

“In the space of six years, we granted loans to nearly 9,000 people,” said Varón. “We have 2,100 active loans, 90 percent of which were extended to people in levels one and two.” Colombia’s socioeconomic categories are one through six, with one being the poorest.

Most microcredit institutions in Colombia emerged outside of the capital, in provincial cities and rural areas.

CAC, for example, has its headquarters in Ibagué, the capital of the west-central province of Tolima, where it has offices in nine of the province’s 47 municipalities.

“We don’t have loans available yet for agricultural activities, but we have had a positive social impact,” Varón said. “Many people have managed to grow their businesses and improve their living standards. We are the alternative between commercial banks and informal lenders.”

The FMM also emerged in Colombia’s vast interior, in the southwest province of Cauca, and its headquarters is still in the provincial capital, Popayán. “We only expanded to Bogotá six years ago,” Niño said.

“In this office we have 6,500 clients, which is a large number. And it has remained high, which shows us that we are providing good services,” she said.

The Visión Económica study, for its part, concludes that “a positive relationship has been identified between access to financial services and poverty reduction, because (microfinance) helps people weather difficult situations that reduce the incomes of low-income populations.”

That is especially important in a country like Colombia, where poverty affects 46 percent of the population of 46 million, according to official figures.