CUBA: Dreams and Progress in a Rural Community

CIENFUEGOS, Cuba, Aug 17 2011 (IPS) - The day that electricity arrived in the Cuban village of Jova, there were shouts, laughter and tears of joy, even among the most incredulous, who had doubted it was possible. “I didn’t know what to do; it actually made me nervous,” Carmen Carvallosa confessed. 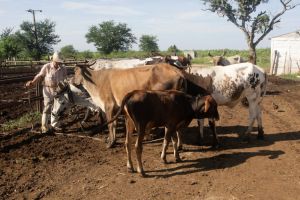 The cooperative plans to have 100 head of cattle in the medium term. Credit: Jorge Luis Baños/IPS

Until then, the only thing for local residents to do in the evening was watch TV on the village’s only set, in a community hall where it has run since a solar panel was installed 10 years ago. “Now, when the power fails, everybody still goes there,” Carvallosa told IPS.

“I do, too, because I’m its director,” said the local resident, who decided to buy a refrigerator instead of a television set for her home, when electricity became available.

This rural community of 32 homes is connected to a Basic Unit of Cooperative Production (UBPC) by a 2.5-km dirt road that becomes impassably muddy every time it rains.

The village and the UBPC, located in the province of Cienfuegos, 250 km southeast of Havana, share the name of Jova, and have the same aspirations for a better life.

A project supported by several international development aid agencies, called “The community of Jova for sustainable management of natural resources,” is now an incentive for both villagers and sugar cane coop producers, who three years ago were on the brink of bankruptcy.

“We had a very tense situation, with times when there was no money, not even enough to pay the workers,” said Jesús Ruiz, administrator of the UBPC that produces sugar cane. He listed problems such as administrative instability, an inflated payroll, low productivity, disorganisation and serious financial problems.

The implementation of internal organisational measures and the foreign development aid paved the way for improvement. “The staff was reduced from 200 to 123 workers, and the production system was reorganised to make better use of the workday. We were able to stabilise the payment of wages and we have been repaying debts,” Ruiz said.

In his opinion, these measures, the opportune arrival of supplies such as fertiliser for sugar cane production, and the improved working conditions made possible by foreign aid helped bring yields up from 9,763 tons of cane in the last harvest to 14,101 this year.

The “Community of Jova” project seeks to contribute to the conservation and sustainable use of agricultural and environmental biodiversity in the region, whose soils and habitat in general have been seriously damaged from many years of extensive sugar cane cultivation, indiscriminate deforestation, fires, and over-exploitation of precious woods, among other causes.

The project features the participation of Jova residents and the UBPC farmers, who after two years now have resources and alternatives to make it possible to reduce pressure on the environment while also improving their quality of life. The project also includes training courses and workshops, and education on the environment, gender issues and other topics.

Electrification of the community, in October 2010, which was financed by a French agency called the Cuba Cooperation Association, led to the return of several families who had left in search of other horizons.

“Things got much better for us. Before, we used chismosas (rudimentary kerosene lamps) for lighting and spent 120 pesos (about five dollars) every month just on cooking fuel. This has changed our lives; now everything is much easier,” said Carvallosa, who still gets excited when talking about it.

Given that the majority of the village’s residents work for the UBPC, greater job stability and discipline was also achieved. “People are more motivated,” Ruiz commented, saying the project made the coop stronger. Not only did its cane yields rise, but it also began producing food, he pointed out.

“The idle fields were full of marabu (a weed). We cleaned them up and now we have about 48 hectares of food crops. Last year, all we consumed from the State was salt, refined sugar, and one or two other things; everything else came from our harvest,” said Ruiz, referring to a decline in the use of the ration book with which the Cuban government guarantees a minimum of heavily subsidised food products to all residents.

The village’s crops include rice, corn, plantain, beans, grains, and tubers. A total of 1,389 hectares are still devoted to sugar cane, the main crop, and about 102 hectares were allocated for the coop’s livestock programme, which during the latter half of 2011 will have the support of the Swiss Agency for Development and Cooperation (SDC).

“The project is going well. The essential goals are being met. The planting was done and the harvest was good; reforestation has been done, and plans are underway to bring water to the local homes,” Fabio Fajardo, national coordinator of the Small Grants Programme (SGP) of the Global Environment Facility (GEF), told IPS.

The residents of Jova eagerly hope that now that they have electric power, they will also get running water in their homes.

According to Fajardo, the piped water project supported by the SGP is almost ready, with only a few components still needed, which will have to be imported. As part of the project, one of the community’s wells was made into a small rural aqueduct, and its water has been made potable for human consumption.

The growth of agricultural cooperatives

The UBPCs emerged in October 1993, based on the subdivision of state agricultural enterprises, initially in the sugar cane sector, which had vast expanses of land and a high level of resources per area.

The workers were given the land in indefinite usufruct, with no payment of rent to date.

However, the fact that they were sold all of the other means of production, even under conditions of soft loans and a grace period, caused them to begin operations with “a large financial debt and in an extremely difficult situation,” due to the severe economic crisis of the 1990s, economist Armando Nova wrote in an article on the coops.

When the UBPCs were created, it was established that they would own their production, part of which would be sold to the State. They also have legal status and operate bank accounts. They lack, however, the autonomy necessary for successful operations. These coops now account for 29.9 percent of the country’s farmland, down from 36.9 percent in 2007.

The Credit and Service Cooperatives (CCS), meanwhile, together with a private sector that grew with the distribution of idle lands beginning in 2008, work 35.3 percent of the arable land, almost double the 2007 total of 18.5 percent, according to Nova’s estimates for 2010.

The Agricultural Production Cooperatives (CPA), in their turn, continue to cover 8.8 percent of farmland. This form of coop emerged in the 1970s, based on individual farmers who voluntarily contributed land and the other means of production.

Unlike the CCS, which were formed in the 1960s and whose members continue to be the individual owners of their land and other means of production, the CPA members sold their property to the coop and became collective owners and workers.