HAVANA, Aug 16 2011 (IPS) - Nearly four years after realising her dream of changing her body into a woman’s to match her transgender identity, Wendy Iriepa rode through the Cuban capital in a vintage convertible, wearing a stunning full-length white bridal gown and unfurling a rainbow flag, the symbol of the sexual diversity movement, for all to see. 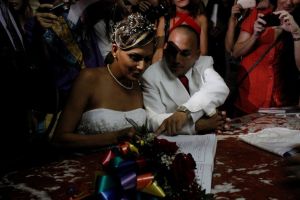 “Along the way, people waved and shouted ‘valiant! plucky!’ at me,” Iriepa told the press at the Palacio de los Matrimonios (registry office) in the Havana municipality of Diez de Octubre, moments before her civil marriage to Ignacio Estrada, a 31-year-old gay dissident who, she says, makes her “very happy” and has evidently changed her life.

Loyalty to her love caused Iriepa to leave the state National Sex Education Centre (CENESEX) in July, bidding farewell to its director Mariela Castro and psychologist Mayra Rodríguez, in charge of care for transsexual persons at the centre, who for many years she had regarded as a second mother.

According to contrasting reports, she was either expelled from CENESEX or she resigned. Whatever the case may be, the 37-year-old transsexual underwent a radical change: from holding an active and distinguished post in the institution, to joining demonstrations by the dissident Women in White, a group of relatives of political prisoners.

She also invited internationally renowned dissident blogger Yoani Sánchez and her husband, journalist Reynaldo Escobar, to stand up in her wedding.

The marriage ceremony went off without a hitch on the afternoon of Saturday Aug. 13, and was attended by many representatives of dissident movements. Earlier, Estrada called the marriage a “birthday present to (former Cuban president) Fidel Castro to remind him of the atrocities he committed against the Cuban gay community, above all in the 1960s.”

Fidel Castro turned 85 on Aug. 13. In the 1960s, many gay and transsexual people were fired from government jobs, jailed, sent to work camps or fled into exile.

“I don’t know why it’s been politicised, because Ignacio and I did not want to make it political,” said Iriepa. However, she said apologies for past mistakes by Fidel Castro himself were not enough to redress the persistence of police harassment of lesbian, gay, bisexual and transgender (LGBT) people in public places.

A further nuance was added Friday Aug. 12 by Mariela Castro – the daughter of Cuban President Raúl Castro and Fidel’s niece – who wished Iriepa every happiness in her marriage, but went on to claim that U.S. government funds are being used to promote LGBT groups on the island “that oppose the position of CENESEX.”

“This (U.S.) policy is a media campaign against Cuba, with a lot of money behind it, and some people are being seduced by these things,” Mariela Castro said. Her allegation was immediately denied by Leannes Imbert, the head of the Cuban Observatory on LGBT Rights, in which bridegroom Estrada is a prominent member.

The head of CENESEX said she was delighted that Iriepa was able to marry, “although not exactly with a heterosexual man as she wanted, but it seems she has found the love of her life and is celebrating it.” CENESEX’s work “has been for this, the well-being and happiness of our sisters,” she said.

Iriepa was one of the first people on the island to benefit from free sex reassignment operations in late 2007, when a team of foreign specialists began training Cuban doctors in the surgical procedures, in a pilot programme largely arranged by CENESEX.

At an international market cost of around 15,000 dollars each, the operations were legally approved by a Health Ministry resolution in 2008 as part of a comprehensive health care programme for transsexuals, which CENESEX complements with a much broader strategy of social integration.

Since that time, 16 people have had sex reassignment surgery and another 15 are on the waiting list, out of 35 transsexuals accepted by the programme, Dr. Alberto Roque, coordinator of the National Commission for Comprehensive Care of Transsexual People, told IPS.

Roque, who is himself a gay activist, said three people who have been surgically reassigned to the female gender have succeeded in changing the legal designation on their identity documents, and 12 more are in the process of doing so.

“Wendy Iriepa’s sex reassignment process is complete, according to the programme protocol, including the change on her identity document. However, she has every right and we are very willing for her to approach the Commission for medical care any time she wishes,” said the internal medicine specialist.

Iriepa was one of the first transsexuals to obtain legal identity as a woman, giving her access to a civil marriage, which the constitution defines as the formalisation of a union between a man and a woman. But the wedding was not the first of its kind in Cuba.

In 1991, Mavi Susel, the first person to receive surgical sex reassignment within the public health system, in 1988, was married at a civil registry office in Cuba. Unlike Iriepa’s, though, her wedding was a very private affair, far removed from the media spotlight, political tensions and controversies over human rights.

Sex reassignment surgery and changes of legal identity, which bring with them a string of benefits for the transsexual community, are among the chief accomplishments of CENESEX, that for years has promoted respect for freely chosen sexual orientation and gender identity as part of its vision that includes legal unions between same-sex couples.

“From this day forth, in our view, Cuba is entering a new era, for which all of civil society is united in struggle,” Estrada said as he arrived at the registry office.

“I dedicate my wedding to all those who want to have their own,” said Iriepa after the brief civil ceremony, adding that she had “fought hard for this.”