SRINAGAR, Aug 30 2011 (IPS) - Rights activists say that thousands of unmarked graves newly uncovered along the Line of Control (LoC) in Indian Kashmir may hold the bodies of ‘disappeared’ people rather than those of militants killed while trying to cross the fortified de facto border between India and Pakistan. 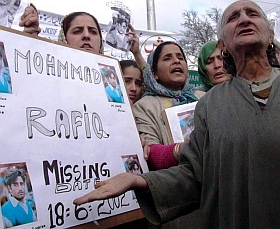 Leading the demand for DNA tests to identify the bodies is the Jammu and Kashmir State Human Rights Commission (SHRC) which, on Aug. 21, published a report on investigations it carried out resulting in 2,156 unmarked graves being uncovered along the LoC.

“At 38 places visited in north Kashmir, there were 2,156 unidentified dead bodies buried in unmarked graves,” said the SHRC report, based on a three-year investigation.

The Srinagar-based Association of Parents of Disappeared Persons (APDP), which estimates that some 10,000 people have disappeared in two decades of armed separatist conflict in Indian Kashmir, has appealed to the Indian government for help in identifying the bodies.

“We appeal to international human rights groups and Indian authorities to identify the people buried,” said Parveena Ahanger, founder and chairperson of the APDP.

“The discovery by an investigation team of the SHRC vindicates our stand on the issue of unmarked graves in Kashmir,” Khurram Parvez, programme coordinator of the Srinagar-based Coalition of Civil Society (CCS), told IPS.

The CCS was part of the research team set up by the International People’s Tribunal on Human Rights, an alliance of civil rights activists, which in 2009 released a report ‘Buried Evidences’ that claimed that there were 8,000 unmarked graves in north Kashmir.

SHRC’s report confirmed that 574 of the graves were of local residents. “There is every probability that these unidentified graves at 38 places of North Kashmir may contain the bodies of those believed to be cases of enforced disappearances,” the SHRC report observed.

SHRC has urged that in future the bodies of those killed by security forces be properly identified in order to prevent abuse of laws like the Armed Forces Special Powers Act that shield men in uniform from investigations in cases where people have died in custody.

“SHRC’s recommendations should be fully implemented and its investigation team allowed to investigate more the thousands of graves we believe are scattered across Kashmir,” Khurram said.

The Indian army and the state police in Kashmir have consistently maintained at media briefings that the bodies buried along the LoC are those of those of armed infiltrators, killed in encounters.

On Aug. 20, the Indian army shot dead 12 militants attempting to cross the LoC at Gurez, in the latest of the armed encounters, which also resulted in the death of Indian army lieutenant Navdeep Singh.

Strategic analysts in New Delhi say graves located along the LoC are likely to contain the bodies of infiltrators that the Indian government alleges are regularly being pushed over what is essentially a ceasefire line drawn on territory long disputed between India and Pakistan.

Pakistan denies militarily supporting the militants, saying it only provides moral and diplomatic support for what it claims is a struggle by Kashmiris for independence from Indian rule.

However, in the background of the armed conflict – which has claimed the lives of 50,000 people – is a dispute between India and Pakistan over ownership of Kashmir that goes back to the end of British colonial rule over the sub-continent in 1947 and the creation of India and Pakistan.

Presently, one-third of Muslim-majority Kashmir is held by Pakistan while the rest forms the Indian state of Jammu and Kashmir. The LoC emerged after several wars between the two South Asian countries failed to settle ownership of Kashmir.

“The LoC is a live border that is fortified by heavy troop presence on both sides and by electrified fencing on the Indian side. Anyone trying to cross it risks being shot,” said Rajeswari Rajagopal, strategic analyst with the Observer Research Foundation, a New Delhi-based think tank.

Rajeswari said that it is hard for security forces to ascertain the identities of armed militants crossing the LoC.

Rajeswari said Pakistan’s shadowy Inter Services Intelligence is known to run militant training camps for Kashmiri youth in the portion of Kashmir that is in its control and then push them back across the LoC.

“There is confusion between armed militants killed along the LoC in firefights and those killed in what are called fake encounters,” said Rajeswari. “The authorities should use DNA profiling and other methods to set speculations at rest.”

Reports of fake killings appear frequently in the Indian media.

On Aug. 8, Indian security forces claimed to have killed a top militant commander in a 12-hour-long gun battle at Surankote in Poonch district. Investigations later revealed the body to be that of a mentally deranged civilian picked up from the Rajouri area.

“These incidents reveal how serious the trend of killing innocent civilians for medals and promotions (by the Indian army) has become,” Kashmiri separatist leader Mirwaiz Umar Farooq told IPS.

Commenting on the SHRC report, Mirwaiz said responsibility for rights violations in Kashmir should be fixed and the culprits tried in the international court of justice.

“International human rights organisations have already taken note of the killings of innocent people by the Indian army and their burial in unmarked graves,” Geelani told IPS.

Jammu and Kashmir’s elected chief minister Omar Abdullah said “there is a need to institute a Truth and Reconciliation Commission on the lines of the commission in South Africa, after the end of apartheid.”

Amnesty International, the London-based human rights watchdog, said in a statement, following the release of the SHRC report, that urgent action needs to be taken to preserve evidence and also widen investigations to include reports of fake encounters across Kashmir.